That's my plan now. Just going to let them mine till they die. I even decided to start gaming on Xbox again so I can let them mine uninterrupted. I will have my 2 AMD cards mining to my exchange and the rest to my wallet.

I think I just had ill feelings towards my overpriced Newegg Shuffle 6700XT.

I left the game in 2014 after hitting my meager ROI. If memory serves me correctly Ethereum had just split into ETC and ETH. Vert and LTC were the main alts. I kick myself everytime I think about how much I would have made of I stick it or for the cost of electricity. I know this is a common story. My goal is to not let it repeat.

I plan to mine, even at a loss, until Uncle Sam taxes me out of the game or out right bans it.
OP

Blaylock said:
I left the game in 2014 after hitting my meager ROI. If memory serves me correctly Ethereum had just split into ETC and ETH. Vert and LTC were the main alts. I kick myself everytime I think about how much I would have made of I stick it or for the cost of electricity. I know this is a common story. My goal is to not let it repeat.

I plan to mine, even at a loss, until Uncle Sam taxes me out of the game or out right bans it.
Click to expand...

How can you be taxed out of it if you post a loss?

How can you post a loss when you can't write off equipment or electricity?
OP

How can you not write it off? Maybe we need a CPA in here. My equipment was bought for a certain purpose. How can that not be a wrote off? No depreciation?

I don't know the tax laws but someone on Reddit posted a bunch of law code and basically you need $100k worth of equipment before you can write it off.

Please don't take my word for this as I haven't gone down that road yet. I plan on getting a hold of my tax guy and make sure he understands it before I file next year.

Some good advice, I think many want to jump into Crypto with a couple hundred of few thousand and want to get rich in a short time, not likely going to happen so:

I'm less impressed at the value of ETH dipping to $1750ish.

I think I might post up my mining rig on Craigslist and see if someone has more money than brains. It could be a huge come up for me.

Today, I spend the afternoon swapping out motherboards and setting up the CPU to mine Monero. I knew the stock cooler wouldn't be up to the task so I installed a be quiet! Dark Rock 4. With all 12 cores overclocked to 4.2GH it's not up to the task either. Lol Soooo, I mounted a 3000RPM Delta to that bish. That did the trick. I have it running at about 70% and the temps are peaking @ 72Â°. 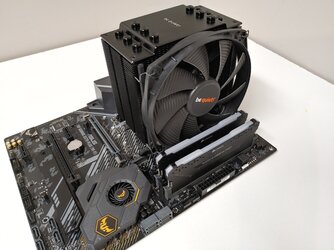 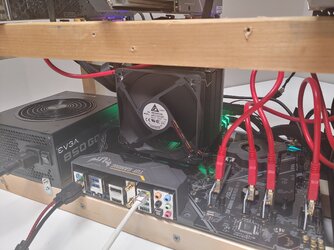 I recently received RTX3060 (standard non-LHR version) and two days ago arrived RTX3060Ti LHR. Yesterday I thought to put both cards on an X299 mobo with limited CPU speed etc. All seems fine but there is one problem. RTX3060 needs that "special" 470.05 driver to mine ETH at 48-50MH/s while RTX3060Ti doesn't work with this driver. Windows is forcing the same driver for both cards, so both work on the new driver, or one card doesn't work at all. So I wonder if there is any way to force a different driver for each card and make them work in the same PC at optimal speed. As an alternative, I can give RTX3060Ti to my brother who is mainly playing games, and take RTX3070 from him. There will be probably 1-2 more cards but I have to solve this issue first.

Picked up another GTX 1660 Super to expand my small mining PC.

Yesterday I picked up an MSI RX 580 Armor 8GB. It was a little over priced but well below the current market value. I should get most of the ROI before February so I'm not too concerned.

This one requires Compute Mode in Windows or RX Boost 1 in Linux. It's running a little hot so I'll probably pull it out of the rig and give it a re-paste tonight since it looks like its never been changed. 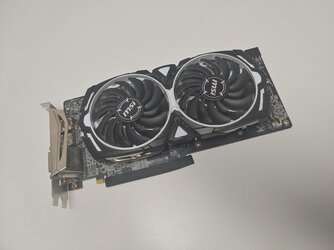 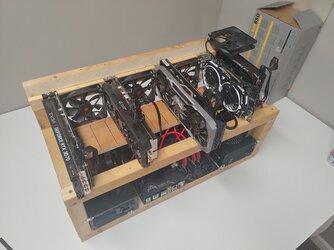 Ok. I did it again. I found a Gigabyte RX 570 Gaming 8G card for $250. Normally I only buy one card and wait till I reach ROI but since we're down to the wire I went ahead and pulled the trigger. My initial settings are hitting 30.36Mh/s. I think I'm getting the hang of this. Lol 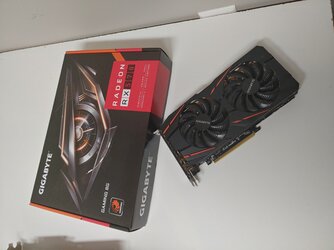 Oh, I almost forgot. My motherboard is fully populated now and my PSUs are both at 80% capacity so I'll need to swap boards and upgrade power supplies if I want to expand again. Hopefully I can resist the urge at least until after ETH 2.0 hits and we see what crap coins look like. 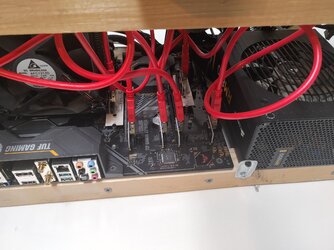 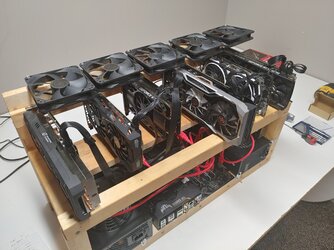 You should pick up some HP server PSUs from parallelminer.com much cheaper and easier than regular ATX PSUs.

I have been looking into them and will definitely consider them when I expand again. I do like the convenience and relative quiet of an ATX PSU, but there's no denying the cost-effectiveness of a server PSU.
OP

Mine are well under their capacity so they are near silent. My 5700xt is the screamer of the bunch.

How much wattage are you guys pulling for this mining stuff?
OP

I don't have a wall meter, nor am I home to tally the cards up. I can say I try to stay at 80% of the PSU rating when the cards are at stock clocks. Then run them far below that. This way a an unattended reboot doesn't overload anything.

All summer long in record breaking heat the server PSUs never went 100% fan speed.
You must log in or register to reply here.