Overclockers is supported by our readers. When you click a link to make a purchase, we may earn a commission. Learn More.
X

Guys I would like to ask you a question, I had in mind to apply two fans on the backplate of the gpu, which heats a lot, to push the hot air generated faster by shooting it on the upper fans and expelling it faster, the idea was born from the fact that not I am very happy with the temps of my liquidated 2080. I state that I have a mini itx case, such Manta nxzt, inside I have a custom loop CPU/GPU with 3 radiators, 1 280 rad mounted in the upper part (uncovered, among other things, therefore external) with extraction fans mounted below in push, a 240 rad with intake fans in pull (rad also in contact with the outside) and a 120 radiator in the rear with the fan exhaust in push . I'm not happy at all with the temp in full load, after half an hour at 100% I even touched 60 degrees, and considering that I also have the radiators uncovered because if I reassemble the covers of the case to cover them it would be even worse, I would even touch 70 degrees and with a custom loop it seems to me there is something wrong. Case fans are set in super silent mode, the pc is inaudible, rising to 50% speed when the CPU exceeds 50 degrees, in my opinion therefore there is little air recycling inside and the gpu suffers, so I had this idea of try placing two fans on the backplate to allow air flow to improve a bit, in your opinion could be a good idea or is it useless and the problem is elsewhere? I have certainly had this gpu for 1 year and a half and in my opinion the thermal paste should be changed but I would like to avoid it because I would like to sell it and not lose the warranty. Your thoughts?

60C seems about right? That's around where I peaked with a 2080 Super (120mm rad). I don't see the idea of adding fans to the backplate helpful though.

I missed something in the translation hahaha

So you think that is normal? Well honestly I had better temp even 6 months ago where they used to stop at 54C now they get to 60, something's wrong for sure

Sounds like you could probably just increase the speed of the fans a bit when the GPU is under load. Might need an extra widget like the Aquacomputer Quadro or Aquaero to do this.
OP
X

What if I install those two extra fan on the front rad in sandwich mode? On the front rad thevtwo fans I have are in pull like this, maybe by putting two more on the other side would be beneficial, what do you think? 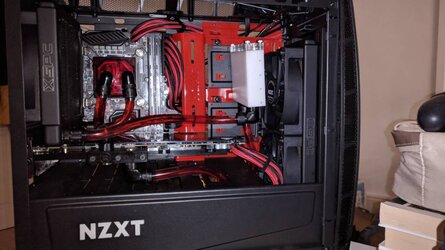 Nkt sure you have the room... but I'd imagine it could help a couple of C.
You must log in or register to reply here.