So my friend purchased the Acer Predator G3-605 some years back, and I'm helping him build a new PC. The two biggest issues with the old one was lack of (non-existent) cooling, as well as a sub-par PSU after he upgraded his graphics card. He has received the case and PSU, and naturally wanted to go at it himself, when he noticed he had a 12-pin ATX.

I found him a replacement, but they are all 1 week+ delivery (9 days now on a friday).

Pins on the PSU: 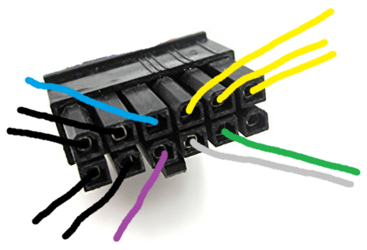 I know that various (Dell, Acer and at least one other) producers has different standards for their 12-pin, and I just wanted to make 100% I made no errors and ask first. I have a voltage meter, and will double check as well, but it's always nice to know what to expect when measuring.
OP

So he got caught up, I started drinking before he got home, I think I have it figured out. 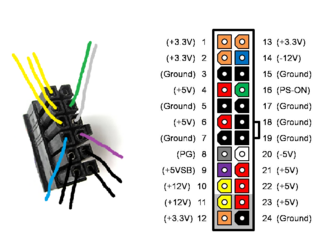 I think I'm going to measure first, write down the values for both (12-pin and 24-pin) and then hook it up. I expect the hookup to look like this, although not just on MS paint. 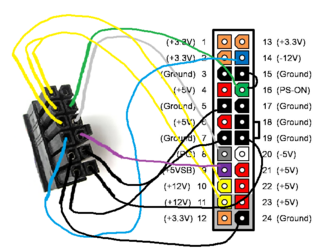 The 12 pin has 3x 12V instead of just 2 (like the 24 pin has), so I need to either split one of the 12 volts or add them both together (5 way connection, 2 outputs feeding 3 inputs). If anyone has a tip on this, that would be much appreciated.

Edit in case someone googles this: To measure the values you need to jumper/short circuit the "power on" (green is standard, check your system specs before attempting) to GND/ground. Do so at your own risk, but assuming the manufacturer uses the standard (24-pin) ATX color codes, you should be safe.
Last edited: Jan 12, 2020
OP

I got everything working, turns out Acer does use the standard coloring code, and I measured exactly what I expected to measure before connecting or powering on. Everything worked fine, and the PC even booted faster according to him. Not sure how a more powerful PSU would be effective in optimizing a boot-up process, but I saw the previous boot-up (admittedly only) once and I definitively got the impression that it booted much faster.

When I got there, he has already had help from someone else moving the parts from the old case to the new one, and for some reason the hardware does not shut down. I swapped the PSU's knowing this, but did not investigate any further until after I swapped. Just powering on the PSU even starts all of the hardware, and shutting down Windows is successful, but the hardware never shuts down. I checked the power/reboot connections, looked around for any logical connector issues, but the HW simply will not shut down like you expect it to.

I will admit that I have never played around with the jumper plugs you use to reset the bios, or any of the other ones (I think I saw 3 in total, but I doubt they would have touched them). I tried to google it, but all I found was windows not shutting down. Anyone got any tip?
You must log in or register to reply here.

F
Looking to upgrade my system for a nominal price...need some suggestions and adv