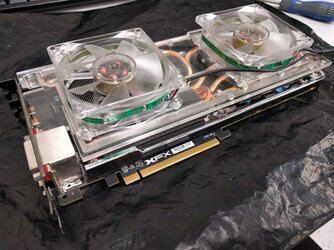 After much work I finally made and reassembled a cooling solution for the 280X. This was an XFX one which was fine until the original fans died. I had cable tied on these two fans and wanted something nicer for a while. I got an old panel from an acrylic case which already had a 80mm fan hole on it, and added a 2nd one. Then cut to shape and mount. Sounds so simple, but it's taken many hours and I wouldn't have done it had I known it would take so long.

I did get replacement fans, but they looked rather horrible IRL so I kept the old ones after all. I was going to wire them directly onto the board, but I got lazy to work out the details and as can be seen just took the wires off the fan to plug into a mobo connector instead.

With some fresh heatsink compound, I hope to give it a test run tonight and see if it still works.

The original grand plan was too grand... I was thinking, since the acrylic already has minor scratches, would it look better if I intentionally gave it a frosted effect, with some LED backlighting? Then there's the previously mentioned fan to GPU mod so I can retain speed control and measurement... but that'll take different fans. I just want to get it back in a system and running for now.

Like it man! When my 280X fans died I just glued two 92mm fans to the heatsink with silicone. Worked great but didn't look as sharp as yours.

I've got a need to redo the fans already. One of them has lost its magic and is very mechanically noisy when spinning, so on the way out also. I'll have to refit it at some point.

Also, I found temps were somewhat disappointing. I don't know if the noisy fan is spinning slowly, but temps were hitting 70's in Heaven which seems a bit much. I removed more of the original plastic trim, which seems to have helped bring it into the high 60's. I will replace the fans on the weekend and see if that helps.
S

I rather like the Direction XFX is going with swappable fans. More GFX card manufacturers need to take some notes!

See my Siggy for card I'm referring to.

And Nice work on the fan mount there. Very Industrial looking.

Indirectly I think I ended up with echos of acrylic waterblocks in the looks, since I use a cut acrylic sheet to go between the fans and the heatsink. The rest of it is pretty much original. I'll probably replace the fans again tonight, and will take updated photos with the now removed plastic trim, it is looking more bare.
OP 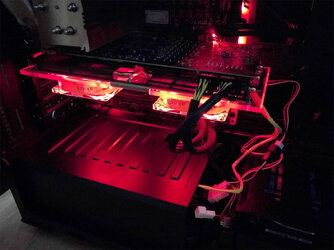 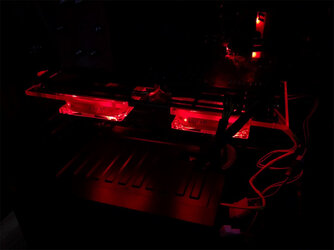 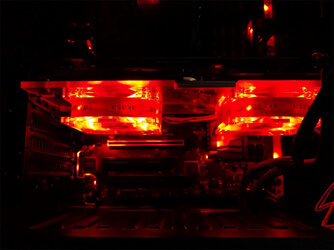 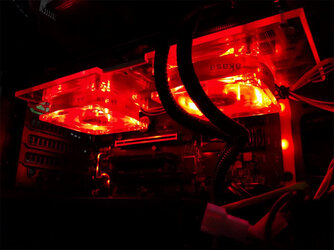 I just switched the fans over to the new ones, and actually they don't look bad when installed and lit up. Far worse unlit! It also has enough spill it lights up the sheet I was thinking of doing separately. Also, ignore cable management as this is just a test system and the card isn't staying in here. I'm now thinking I might use it in the Ryzen rig to make it an all red system...

Initial tests on temps seem to show a massive improvement over the old fans. Running Heaven Extreme on loop was only going to upper 50's. Giving it a bit more load variety now, with case lid on, and minimum set fan speed to see how that goes.
OP

Basically, I was topping out around 64C running any of Firestrike, TimeSpy, Aida64 GPU stress. Feeling confident, I put FurMark on it at defaults and that's topping out at 73C so far. The temp is pretty much levelled out, maybe it'll go another degree if I leave it long enough.

Note the card has been bios mod un-overclocked. It is running at AMD stock clocks/voltages. The factory OC included an overvolt that significantly increased power for the tiny core boost it gave.

Looks good. I'm a fan of stuff that doesn't look like every other one in the world and manages to look good doing it. I haven't modded anything on my build, so pics like these are a treat. Thanks!
You must log in or register to reply here.

Production hit for the dumbest of reasons.