Although I don't have the money for the 1070 right now, I was curious if the 9590 would bottleneck the gpu. I have been hearing everything that the 9590 can support one 1080, I have also been hearing that it could only support one 1070. Just looking for everyone's opinion on it. If anything, i might end up getting a 1060. what would the biggest card the 9590 could saturate.

Depends on the title/settings.. but in some cases, it can be a bottleneck, sure.
OP
D

Well I am more worries about bf1. I have a 980 right now and Im getting around 55fps in bf4. running bf1, would the 9590 saturate a 1070? other than that, the only games i have that are moderate to run is farcry 4 and planetside 2. I am preparing my system for bf1.

I have an 8350 @ 4.64ghz and sli 1070's and everything runs great. I came here from another forum where nobody ran amd everyone pushed i5 and i7 on people and if you said what I just did everyone would obsess over bottleneck. I get no stutter, no lag, so when people kept up about how much better an i3 was over an 8350 I had enough of their crap and left their site for good, deleted my account and I no longer recommend to people to check out their site.

A 1070 is a great card for that cpu, you might have some bn vs a 6700k considering amd is ddr3 and new intel is ddr4 but honestly you won't notice, nobody has noticed bottlenecking since single core cpu's when that actually meant something and anybody claiming such is not someone you want recommending anything to you. The only real instance of bn is running a game that requires more cores than your cpu has.

Also, with a pci slot blower fan blowing directly onto my nb (fits snug between my cpu heatsink and my gpu backplate) I got 3015mhz hyperthread stable by increasing cpu-nb voltage +.15, just something to shoot for if you're overclocking. 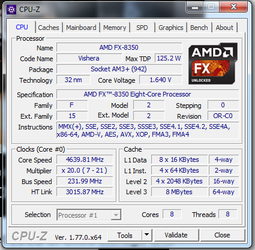 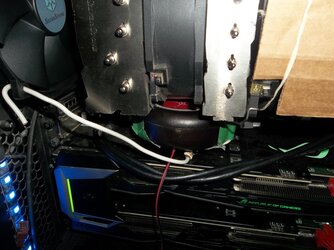 'Runs fine' and 'no bottleneck' are two different things. Pretty clear we have a bottleneck here. 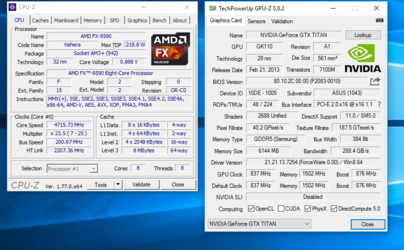 how bad does it bottleneck a 1070? slightly?

If you are spending the coin on the 9370, you need a beefy board and cooler to support it, even at stock speeds. For $150/$250 (~ difference between 6600k/6700k + ddr4 vs 9370) more you get a processor that doesn't doesn't bottleneck your stuff. If others uses dictate heavy use of cores, I'd look at amd. It rally all depends on your budget/what you want to spend and uses. Both cpus are certainly viable solutions!

The op has already spent the money, please don't sell him a new computer, I already left a forum where this was so commonplace a thread titled "which amd cpu should I get" with the description reading "I hate intel and am moving away from their products, which amd processor/motherboard would you recommend for someone wanting to play games" to which the first 15 replies were "get an intel chip".

The only reason not to recommend amd is that the socket hasn't seen an upgrade in 5 years but if you want to go that way I more than fully support your decision as not only is it an industrial standard (it has been around for 5 years) it is being developed for much more commonly now, and considering both xbox and ps4 both use amd 8 core cpu's this cpu will be popular with multi platform games for at least another 2 years, and depending on how long it takes for amd to release their new 16/32 core lineup and for that to become the standard maybe longer still.

It is not the fastest route, but it is customizable, overclock friendly, and works with everything you want it to.

Oy.. missed he owned that cpu already... my fault! But I won't get into the amd/intel discussion as I can see you are still on about it from your other forum.

Well, you can see what it happens in your title of choice to a 1080. I'd imagine the 1070 to be less bottlenecked, but not from nearly 50% to 'slight'. It is what it is though at this point.

if you are an fps counter watcher you get intel.
if you want to play a game, get some work done and don't care to frustrate yourself watching fraps, like a cool looking water cooled rig, amd is fine.
we just see so many people that think they should watch fraps instead of relaxing having some gaming going on.

I like to game on amd and have since way back when gta 3 first came out and pentium 3 cost $700-900 and the k8 or k7 was $250. I know intel rule the single thread world but multithread is a very close game and there are only a few non optimized games I've run into issues with like 'the evil within' where I can't get 60fps even with an overclocked 1070 but most games I'm running 2160p @ 144hz (thanks to dsr) and I don't mind the missing fps.

so would it be worth getting the 1070 or should i stick with the 1060. i mean there is a pretty big price difference between the two. i wont be changing processor until at least zen comes out. if it sucks then in jumping ship.

What happens with bottle necking is there's usually a cpu bottle neck with current AMD processors, even the biggest 9590.

You will get a frame rate and performance increase going from a 1060 to 70. How big of a difference will be determined by what games you play really. What resolutions are intended for use with X refresh rates.

Of course Intel has an upper hand with gaming, so to give you my experience.....

The Titan with the 9590 enabled the same use of Max details and Physx settings, but with about the same frame rates with the GTX 760 and high detail min physx.

My opinion which I should keep to myself would be to go for the GTX 1080 so when you build that ZEN rig (Or Intel rig), it'll be ready to handle just about anything you want max out (If rumors state Zen games as well as Haswell, let's hope it does)
Last edited: Oct 27, 2016

so would it be worth getting the 1070 or should i stick with the 1060. i mean there is a pretty big price difference between the two. i wont be changing processor until at least zen comes out. if it sucks then in jumping ship.
Click to expand...

Id go with the 1070, absolutely! Crank the settings and go! Like Shrimp said, when you upgrade, free performance!

What resolution is your display? If you're using 1080p and building a new rig in a few months, I would save the money and get the GTX 1060. Bearing in mind I'm waiting for my 1070 for my 1080p right now. LOL. But my card journey is a whole 'nother story (several, in fact, if you count the threads)
OP
D

Okay. I was just curious. I'm running kinda a ****ty monitor. Cheap acer at 60hz. I don't even know what pshyc x is. I run everything on ultra though.

If you're going to upgrade the monitor and can afford a better card then the best one you can afford is usually a win. But a 1070 or 1080 for a 720p display wouldn't have much upside.
OP
D

It's definitely 1080. I'll save up for some new parts. Thanks for your guy's help.
B

@OP, considering you're running 1080p, that puts more limitations on your CPU than GPU. I don't think you will have any visceral benefits of getting a gtx 1080 over even a gtx 1060. With your rig and demands, theres not much reason to go the 1070/1080 route with out either a) going up in resolution, or B) getting a new platform all together.


oobymach said:
I like to game on amd and have since way back when gta 3 first came out and pentium 3 cost $700-900 and the k8 or k7 was $250. I know intel rule the single thread world but multithread is a very close game and there are only a few non optimized games I've run into issues with like 'the evil within' where I can't get 60fps even with an overclocked 1070 but most games I'm running 2160p @ 144hz (thanks to dsr) and I don't mind the missing fps.

The games you play and resolutions you play them at are the deciding factors here. In MOST modern titles, Intel is unequivocably the king (at least until zen comes about). We get it. You enjoy your AMD processor. Thats fine. OP already owns a 9590, thats fine too. No one here is gonna say "its a bad chip".

Whats not fine is the "AMD is just as good as intel" rhetoric that you're spewing. Its both ridiculous and painfully incorrect. For pretty much every game made since 2012, Intel is absolute king. Personally speaking, I saw a HUGE increase in performance swapping to intel, and I had a "god chip" 8320 that would hit 5.0ghz at 1.4v. Is AMD acceptable? Absolutely. Good as intel? Lol...no. That said, no one really cares one way or another what forum you left for whatever reason, give it a rest. We will (and always have) recommend the BEST solutions (usually as a group too); and right now, the best solution isn't even close to AMD.


oobymach said:
The only reason not to recommend amd is that the socket hasn't seen an upgrade in 5 years
Click to expand...

oobymach said:
(it has been around for 5 years) it is being developed for much more commonly now
Click to expand...


oobymach said:
It is not the fastest route, but it is customizable, overclock friendly, and works with everything you want it to.

So... its slower, more expensive (after you factor in cooling, power and motherboard REQUIREMENTS), has less I/O, lower features, fewer PCIE Lanes, lack of feature support, again SLOWER, FAR more inefficient, and generally inferior product than an i5 setup.... but you still recommend it? WHY?
You must log in or register to reply here.