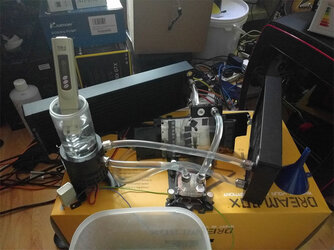 I ran this for some months and decommissioned it when I changed case and went back to air. One of the decisions for that was that I could see some residue buildup in the waterblock. It was a light off-white colour. I also noticed the tubes going cloudy as was the reservoir.

This weekend, I finally got around to cleaning it for reuse in what will be my secondary OC bench system. I flushed it once through with deionised water. This seemed to have a suspension in it, but wasn't clear. I thought something harder was needed. Looking around my chemical store, the only candidate was citric acid I had previous bought to clean fish keeping equipment. It's pretty mild and safe, you can eat it pretty much straight from the tub. I dissolved a bunch of it in some water (couple tblsp/l ball park) and made sure it was fully dissolved before putting it into the loop. 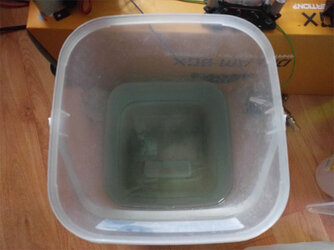 First run was very interesting. The liquid that went in was clear and colourless like water. It went a pale blue-green colour, so it was doing something to something. I poured it out into a container, where after leaving it to settle, I could see a darker particulate falling out of suspension. I made another batch and run that through, this time no visible colour change so whatever it was, it was done. The tubes were looking obviously clearer now. Most of the residue in the block had gone out now, at least in the areas of flow.

Now I'm doing flushing of the system before reuse. Again using deionised water, which I checked with a TDS meter was reading zero before use. This is a conductivity measurement that expresses how much dissolved stuff is in water equivalent to table salt in ppm. First flush read over 600. 2nd flush just under 60. 3rd flush down to 6, where I think I'll stop. It isn't worth the effort to try and get it to zero as any impurity will keep it above that.

Next up is a drain and dry, ready for re-installation.

Normally the greenish blue colors is from oxidation of any copper in the loop. Looks good though.

What kind of fluid, biocide and tubing was used prior?
OP

Tubing I can't remember the name of but it is the EK stuff. Fluid was EK's premix. I suspect problems were due to insufficient flushing prior to use.

mackerel said:
Tubing I can't remember the name of but it is the EK stuff. Fluid was EK's premix. I suspect problems were due to insufficient flushing prior to use.
Click to expand...

That or crappy tubing. I'd recommend some PrimoChill Advanced LRT if you haven't already.
OP

Just looked it up, it is EK-DuraClear. The original kit was an EK P360 which I expanded with a 2nd rad and GPU block, all EK.

Anyway, it's been fitted, tested, and running under load now. I saw an unexplained massive temperature differential once again. It seems to be something with me and waterblocks as I randomly get that with AIOs too. Anyway, I went for a delid, and that seems to have done the trick and a 6600k is now running Prime95 small FFT at 4.2 GHz 1.25v set at around 55C. It was touching 70C before that which is simply worse than the Noctua cooler I took off it...

Well, if it was running cooler with your air cooler and not with your loop, something's seems wrong then.

I should note, flushing the system won't always solve your issues if you have debris lodged in the small micro lanes of a blocks. Can you check the loop's flow as well?
OP

There's nothing wrong with the flow before or after cleaning. Even with the visible debris performance was fine. The problem only manifested itself when installing on a different system.

It's 100% related to the mount of the block. I don't know what it is, but I've seen it on multiple systems with different waterblocks. At first I put it down to bad IHS but I'm not sure that is the root cause if it is fine on air. I'm now wondering if it is excessive pressure on the mount. Remember when Skylake first came out, there were reports of it being thinner than previous and bending under the pressure of some coolers? I could imagine in that case, if there was too much pressure and the substrate bent down even slightly, it would tend to pull apart the die and IHS. By de-lidding it, I just reduced the size of that gap eliminating that problem.

With my previous Corsair H110i GTX I did find loosening the mount screws can help improve performance, which kinda ties in with my theory. When I first got that and discussed it on Corsair's forums, there was also speculation that mobos varies in thickness, in particular Asus was claimed by some to be thinner than average, which could alter the mounting force depending on the mount design.

What the blue color is is standard copper oxidation. It does slowly ohh so slowly build up on the copper/brass in the rad. Using a concentration of citric acid (not sure what amount by %) you did the same as vinegar does. As the loop ran the acid cleaned all the oxidation off and I'm sure leached even more copper off the tube walls. Not much, but enough to turn the liquid blue.

Not an issue. It's clean now. If you have access to glass kitchen bowls pour the liquid in them and you can see if the particulates are gone. That's the big issue. More important on building a first WC loop and rad dancing rads to make sure the chunks are gone from manufacturing.

Anyhoo, the above are for noobs more than anything else. I'm sure you'll figure it out.
You must log in or register to reply here.

How to clean your loop without taking it apart?