So, upon getting a GTX 1080 with a blower cooler (not my choice of cooling, would have preferred a mult-fan cooler such as ACX, Twin FROZR, etc), I quickly discovered that this thing runs flipping hot. Hot as in, 83°C is not only the suggested temp target, it's like it is this card's objective to meet or exceed that temperature as often as possible with the fan at high speeds making it quite loud. With my 780, 780 Ti, and 980 Ti (with ACX or ACX 2.0 coolers on all of them) 83°C was their temp target as well, but I never saw them exceed say 75-77°C in this same computer case. 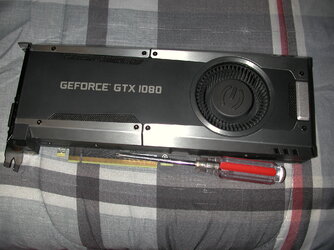 Decided to try some things to attempt to cool this beast better than it could be in its stock configuration with the shroud and blower fan, since similar cards with non-reference coolers are overpriced right now and buying something else is not a viable solution. So, that led to step two, which was removing the shroud and unplugging the LED cable from the card (fairly easy to do), and then mounting a 120mm fan directly onto the heatsink with some zip-ties.

Card was much cooler, and noticeably quieter while gaming or mining than with the stock configuration. Only real downside was that it effectively makes this a triple-slot card, and so mounting anything in the slots below it would be more difficult than it would have been before. 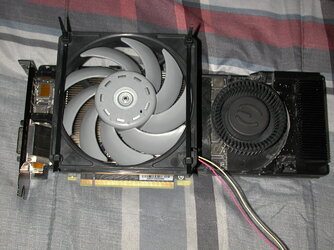 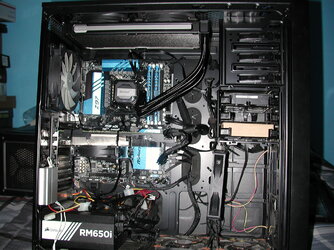