AIO'd the GPU and CPU in a new case

So i had previously posted about where to go to improve cooling for my setup, but i was leaning towards an AIO setup for ease of maintenance and cost. I was inspired by a good friend who fulfilled his dream of a full custom loop (and subsequent great overclocks). However, i wanted to keep costs down but it looked like a 240mm AIO case simply wouldn't fit in my current case at the time, so i had to add that to the list of what to get. End result was a Deepcool Captain 240EX, NZXT Kraken G10 bracket, and Corsair H55 cooler housed in a new Deepcool Dukase v2 case. Total damage was about $250, and luckily my fiancee paid half of that as a gift for our anniversary. The case is actually quite nice but the fans that came with the 240mm AIO didnt play nice with it's build in fan speed controller. Probably a voltage thing as they were only 2 pins and the slider has Low, Medium, High only. The fans would only come on at High. This was later resolved by switching the 2 fans to the mobo's 4 pin PWM headers. The h55's fan is now hooked up, along with the front intake fan and the kraken g10's fan, to the Dukase's integrated fan controller and these fans play nice with it, fortunately. Looks like ive got a negative pressure setup going now as a result of 2 rads (3 fans total) that are both exhaust and only one intake fan. Its all good though, i got a nicer spot on the top of my desk finally for the case to help keep the dust away. 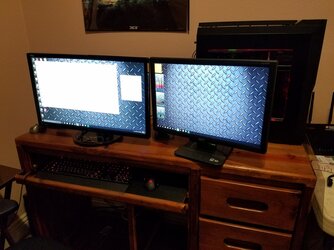 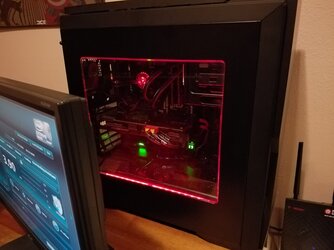 I've got a video of that process i'll link here if y'all want to watch.

Onto the Kraken G10.
So...took about 3ish hours with the help from a very crafty friend. I managed to keep the backplate and midplate on my 970 ftw+. Really happy with being able to keep the midplate on so it can help cool the VRMs/VRAM. The backplate required modification though because the holes to mount EVGA's ACX 2.0 cooler to the PCB did not line up at all with the Kraken G10 backplate holes. The board PCB does still have the reference mounting holes though, which would require removal of the backplate to use so that was roadblock number 1. We ended up drilling new holes on the backplate that lined up with the reference mounting holes and that did the trick, though getting the holes lined up right and deburred and everything took a few tries but it still came out clean. The copper shim, which my buddy helped me fab up from the copper baseplate of a donated air cooler, was roughly 25mm x 25mm x 1.5mm and worked out perfectly. 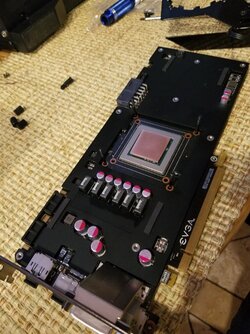 But then I got a little confused when putting the pump on and had to redo it after the first try, but did eventually get it on good. Did an asterisk type of pattern for the thermal paste applications with MX-4 and it seems to have turned out good. Gaming (Bf4, rainbow six siege, the division, etc), i could see the GPU previously hit nearly 80c. Now, running Valley benchmark on Extreme HD for about 40 minutes, the highest the GPU got was 55c. Previous idle was in the mid 40s, now its in the high 20s/low 30s. Great improvements so far, ready to start pushing it now.

But yeah, there were alot of roadblocks on getting this installed because of the non-reference PCB and cooler so be aware of possible issues. Have to get creative to make it work. These pictures don't really tell the whole story, but there is a video coming that will detail all that (part 2 of the above video). 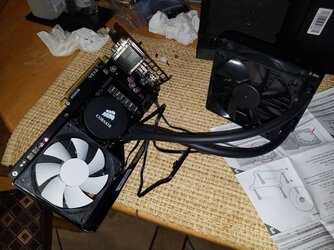 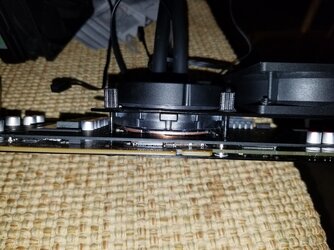 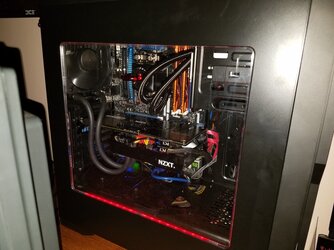 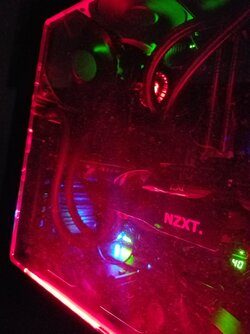 Heres part 2 of the video mentioned above


Was quite impressed with the temps. Idle went from mid-40s C on air on the GPU to high 20s/low30s (i saw between 27c and 31c idle). Running valley for about 40 minutes on ExtremeHD preset got the GPU to 55-56c max, which i think is pretty good. Happy it all worked out and especially with managing to keep the backplate and midplate on.

Can you host the pictures locally instead of on Photobucket? It keeps them from going away and prevents issues with third party hosts being blocked for some users.
OP

ATMINSIDE said:
Can you host the pictures locally instead of on Photobucket? It keeps them from going away and prevents issues with third party hosts being blocked for some users.
Click to expand...

ATMINSIDE said:
Can you host the pictures locally instead of on Photobucket? It keeps them from going away and prevents issues with third party hosts being blocked for some users.
Click to expand...


A question for you all...do you think my midplate needs any heatsinks on it to further help it out? I saw some people have done what i did still added heatsinks to the VRM area of the GPU but my friend who helped me put this together felt it was unnecessary (as do i). Would the midplate acting as a heatspreader for those components + the fan blowing on the midplate be enough?

Fans passing air over the plate are plenty, this is what the stock configuration does.
OP

Fans passing air over the plate are plenty, this is what the stock configuration does.
Click to expand...

Thats what i was figuring. However, the ACX cooler had 2 fans with one above the VRM area at least and the fan blowing on the midplate now is located on the rear of the card while the VRMs and such are over on the front of the card. I just imagine that the heat dissipation the fan blowing on the midplate (on the opposite end of the card) provides enough, which i think it does especially considering the AIO is pulling any other heat away from the GPU area pretty well. Maybe im overthinking things.

If you're worried about it touch the plate and see if it's hot.
OP

ATMINSIDE said:
If you're worried about it touch the plate and see if it's hot.
Click to expand...

What an esoteric idea.....touch it...like with my fingers? *gasps*


lol yeah i'll have to try that once i start OCing. Currently at stock, im sure its not an issue.

Helgaiden said:
What an esoteric idea.....touch it...like with my fingers? *gasps*


lol yeah i'll have to try that once i start OCing. Currently at stock, im sure its not an issue.
Click to expand...

Nice use of esoteric
D

I
Water Cooling a Workstation PC

Jun 21, 2020
Iron_Planter
I
Y
AIO liquid temperature consistently higher than GPU. But how?