EarthDog said:
Looked like overall it was a negligible difference... and in the end said to leave the ecores enabled (11:17+)?
Click to expand...

Ok you won me over. I set it to auto voltage and worked the speed up from stock until heat got uncomfortable. I ended up with 4.9ghz on p-cores and 3.9ghz on e-cores with 1.224v and max 86c during intel extreme tuning utility on memory test which seems to be the hottest and hardest to pass. I feel slightly better idling at a lower voltage and I'm sure extra cores will only become more useful with time.
W

Woomack said:
I still see no difference in most games above 6 cores but there are some titles that use whatever CPU has (just not scaling perfectly well above 6-8 threads). One example is the Civilization series that uses 24+ threads. Even looking at the test in the link, it looks like some games react better, some worse. There is also that core park/unpark software patch that most brands released, so you can check if it helps in older titles. If I'm right then problems with E-cores can happen more often in older games.

Anyway, someone mentioned bclk overclocking some days ago and yesterday I wanted to check how it's scaling on AL. It helps a bit in some tests but some others give weird results. On my setup with IGP I could go up to 175MHz without corrected PCIe errors (can check that on the bottom of the list in hwinfo64) and the max of about 190MHz. With discrete graphics, I could go up to about 230MHz but it was acting weird above 200MHz. Corrected errors = PC won't crash but can be close. Uncorrected = bluescreen or freeze.
In benchmarks like Geekbench, there are slightly better results. AIDA64 is clearly showing some weird results and it's hard to believe they're real. One example is below. Memory bandwidth went from 90-100GB/s to 155-170GB/s and latency went down from ~60ns to 33.5ns (and it's not even the highest bclk that can be set). I bet there will be some fake scores in rankings too and another witch hunt on hwbot.
Click to expand...

Those are some pretty impressive BCLK speeds regardless, but the hubbub around Alder Lake BCLK overclocking was surrounding boards (like the Maximus Apex and Hero) that feature an independent clock generator for PCIE which would theoretically let you push the BCLK as far as the CPU can go and shouldn't effect the IGP/GPU.

I didn't think that the Strix Z690-I had an external clock generator, but a 70-100% overclock without one seems pretty insane. I'm still waiting for someone to ship a B660 DDR4 board with confirmed non-K BCLK overclocking, a 5.4GHz 12100 would be make a really fun budget gaming system.
W

I heard that Intel prepares bclk and voltage locks for non-K CPUs. I guess we will find out in upcoming CPU microcode updates.
I also can't really see non-K CPUs as a budget and reasonable series for gamers with current pricing. The cheapest K CPUs don't cost so much more considering how much cost graphics cards or motherboards. I was counting on a cheap i3 with additional E cores but even the i3-12100 costs nearly $200 when 12600k costs less than $300 and somewhere between are all those higher i3 and lower i5.

Has anyone noticed that the IHS on the Alder Lakes CPUs is quite concave? I didn't notice it too much with the ASUS Ryujin but thought it should be cooling better. I finally got the LGA 1700 backplate for my EK Predator which is an outstanding AIO performance-wise, just doesn't seem to fit in any case properly because of the way it's built. So I hooked everything up and the performance was terrible, I couldn't believe how bad it was.
I then decided to tear it apart and clean it since it hasn't been done in years; it was a bit dirty but not enough to explain what I was seeing. That's when I noticed my "cheap" TIM was quite thick in the center of the CPU after removing the heat sink. Normally it would be almost transparently thin. The bottom of the EK cold plate is very flat (the ASUS is a bit convex) and was only making good contact on the outer edges of the CPU.
So I swapped the cheap TIM for some Kryonaut and voila! The temps dropped over 20°C and I can now run 5.2/4.1/ GHz at 92° with 1.28V, previously I was struggling to keep it from throttling at 5.1/ 4.0 1.25V. CBR23 runs at around 85C 5.2/4.1 GHz for reference.
I'm certain the better TIM would improve the ASUS cooler as well but not to the same extent.
Just thought this was worth mentioning as it may help someone else. 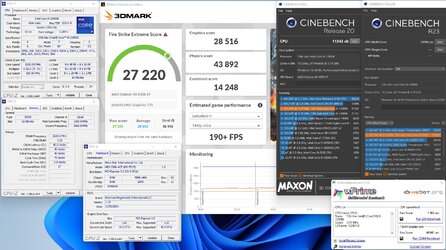 I was checking how my CPU is acting and when I set enhanced mode on my ASUS Z690-I Gaming then the CPU was boosting up to 5.5GHz on 2 cores and 5.2-5.3GHz on others. I was quite surprised as it was working stable this way on 240 AIO.

There were many comments around the web about Alder Lake's IHS. It's for sure not perfect and too high pressure may cause some deformations. I wasn't digging deeper into this topic but after moving my CPUs multiple times on various motherboards, I see that the TIM is not spreading equally. It's still not bad and I don't have problems with temps. The 12600K seems nearly perfect while on the 12900K there is always a bit more TIM in the center, like a stripe.
I'm usually spreading the TIM on the whole IHS as a stripe or small dot in the center causes to cover about 80-90% of the IHS. I'm also using a bit too much TIM but it's not causing problems and I really don't care about the 1-3C difference. When I'm testing coolers then it's a different story.

I wasn't testing the TIM from the link but I was testing Streacom TX13 TIM which is 13W/mk and the results are about the same as with the Kryonaut. Noctua NT-H2 is also about the same. I just feel like most of these popular 12W/mk+ TIMs are about the same. The next significant difference is liquid metal. I don't know if the Streacom TIM is available anywhere; I can't find it in stores. I got some test samples before the release but it was a retail package and supposed to be exactly the same as in stores.

I doubt that too much pressure could "deform" the IHS. It's thicker than ever before and that would warp the whole chip/PCB. My 12600k and 12900K look the same with a dip in the middle. You're right about the two stripes, that's exactly what I see with a "puddle" in the center.

If anyone's interested in blowing their warranty for fun (like me), this is now an option: https://rockitcool.myshopify.com/co...cessor/products/copper-ihs-kit-intel-12th-gen

Johan45 said:
I doubt that too much pressure could "deform" the IHS. It's thicker than ever before and that would warp the whole chip/PCB. My 12600k and 12900K look the same with a dip in the middle. You're right about the two stripes, that's exactly what I see with a "puddle" in the center.
Click to expand...

Woomack said:
I was checking how my CPU is acting and when I set enhanced mode on my ASUS Z690-I Gaming then the CPU was boosting up to 5.5GHz on 2 cores and 5.2-5.3GHz on others. I was quite surprised as it was working stable this way on 240 AIO.
Click to expand...

The Z690 ACE has something similar, when selecting the core OC type like "all core", "per core"there's another option labeled turbo offset. By setting it to +3, single-core will boost to 5.5 and all core is 5.2 but heavy loads like CBR23 it only hit 5.1 on all cores. This is with Auto Voltage. The option is there for the E-Cores as well
W

In ASUS BIOS can enable enhanced mode and good luck This is like a single option ... there are other options for offsets and auto OC too.
W

I noticed some weird issues on Z690 motherboards, and I'm wondering if anyone can confirm that.

The other drive Phison PS018-E18 also reaches it's rated speeds. These results are on active drives with OS on them and not secondary with fresh format.

Neither of these are 7.3K drives, but, I'm getting what I'm supposed to on them on Z690 (Hero and Tachyon are currently running).
W

Curious... I wonder if that changes when you use PCH connected M.2 sockets instead of CPU?
W

This is only semi related but since bandwidth is important for ddr4 board owners maybe it counts. I thought my ram was nice and cool because hwmonitor showed 34c during intel burn test memory stability test. I had it at 3600mhz cas15 1.4v with system agent at 1.2v and thought I was good. Then I got a few system shutdowns. After making sure the power supply was ok I lowered my ram clocks to 3400 to see if it helps. No crashes for a week or so. I started bumping up speed on ram and at one point finally thought to check max temps in hwmonitor after exiting a game. Even with only 30% ram usage it was almost 50c in game which didn't show up in tests. Apparently b-die is sensitive to temps so I zip tied a little 60mm fan over the ram after removing the 120mm front fan from the nhd15 (only one that would fit over the ram) and ram temps dropped 8c during modded skyrim and 5c during idle. So far I have 3500mhz at cas14 w/ 1.4v and no crashing. I think everyone else knew this already but just in case. Cpu temp didn't seem to change after taking off the front 120mm fan. Maybe the 60mm is blowing on the base a little and helping out

I heard that some users noticed problems with stability above some temp but usually not below 60C (at least not at typical timings for 24/7 use). At least I noticed problems at about 65C and dual-rank modules generally kept stability at a bit higher temps (also run at higher temps than single-rank modules), but it can be related to a specific B-die batch or memory module design. Some heatsinks are also more for the looks than heat reduction.

I think the heatsinks work since the temp went down a nice amount. I could be wrong about the ram temps crashing the pc but if it's hitting 49-50c at 30% full I assume it can get much worse the fuller it gets.
You must log in or register to reply here.