Overclockers is supported by our readers. When you click a link to make a purchase, we may earn a commission. Learn More.
N

Hi all, this is my first custom fabrication build. My goal was a smaller, unobtrusive PC with a clean and simple no-frills exterior and with a weathered industrial interior that reflects the atmosphere of the Alien movies. For this, I started with the NZXT s340 case in black, gutted it, and fabricated replacement internals.

The alien facehugger and eggs were from a toy collection which come in just a bland solid color. The treatments I used for most of the components are acrylic base paint, ink washing, dry brushing, and then gloss varnish.

I soon found that the acrylic paint on the facehugger begins to break down in the water even when fully cured, so I used Silicone Conformal Coating to water seal it. I also used the Silicone Conformal Coating for a very wet appearance in some areas of the other components. This makes an amazing wet look, but I came to find that it also appears as a completely dry powder under UV light, so in the end I had to minimize the use of UV light to only the RAM, within which I applied UV reactive paint to insert strips.

There are several stages of LEDs, each stage powered by an LED controller. Because individually wired 12v LEDs waste most of the energy through the resistors, I instead made each stage a series of LEDs with a low resistor value. With so many LEDs in this application, this somewhat reduces the energy use and heat, as well as permits the use of low power Bourns linear potentiometers to adjust the brightness of groups of LEDs.

There are two LED switches, one switch for a subtle glowing effect and one switch for the beacon effect and strobe effect to simulate the self-destruct countown scenes in the Alien movies. For the amber beacons used in those scenes, I used an LED controller wired to 8 LEDs spread over roughly 120 degrees, and the LEDs are runs in a sequence pattern. Then there are two separate stages of strobe LEDs, each somewhat randomly cycled.

For the illuminated CPU waterblock, I provided Performance PCs the Weyland Yutani logo with which they used to make the face plate. I then used a yellow gel filter for the yellow areas.

The floor of the lower level is stainless steel grating. The horizontal tube structure running along the back of the floor are scaled based on the Nostromo corridors. 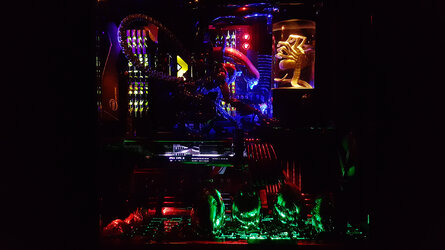 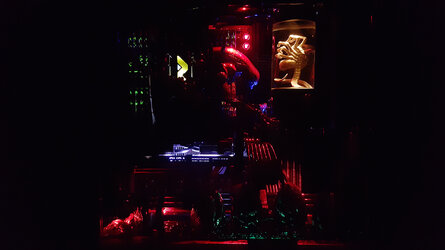 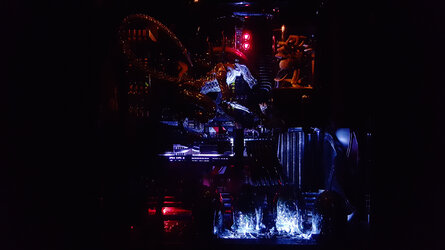 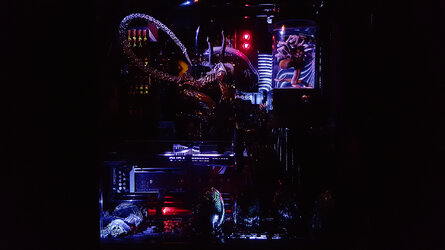 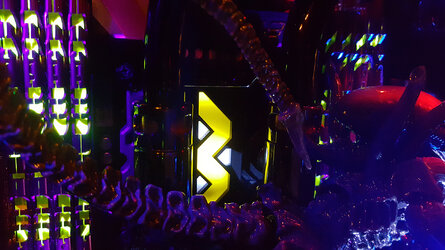 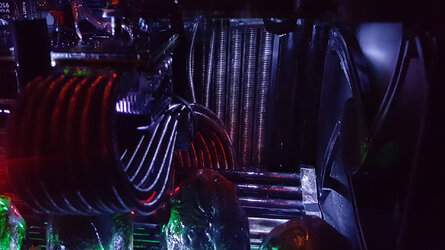 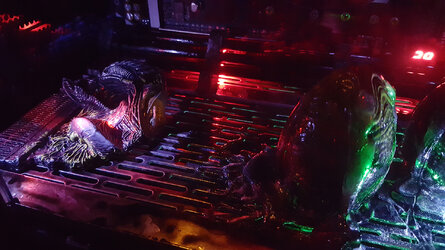 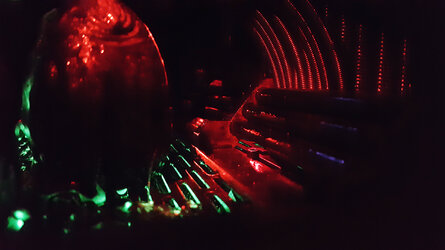 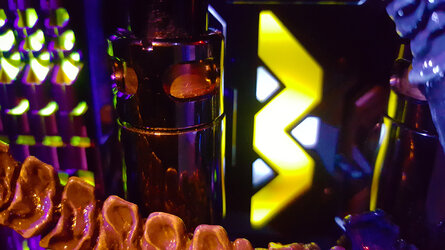 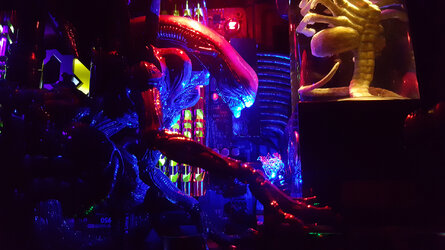 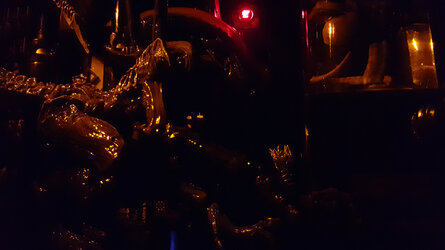 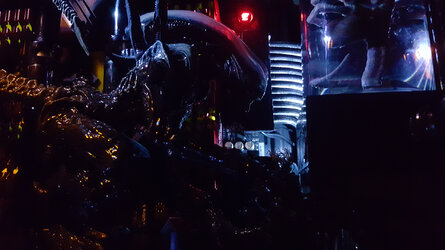 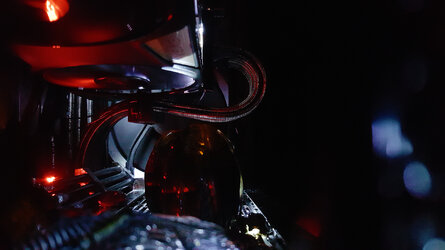 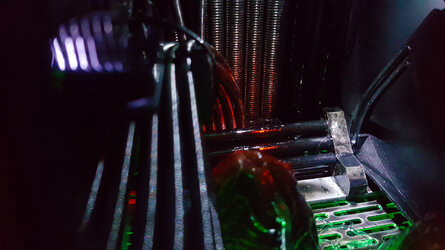 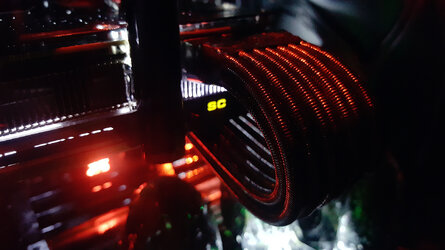 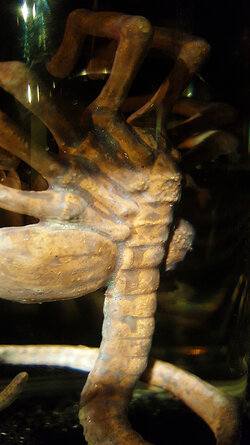 With the interior complete, I'll consider concepts for the exterior.

Looks good. I would be interested in some shots of the machine in the light. It's hard to see some of the detail that you mention in these photos.
OP
N

Thank you.. Much of the goal was to maintain the same sense of mystery as the Alien movies, by limiting the light. So the approach was just as much about shining darkness as it was about shining light. I'll post up more photos and you'll see there's not really much to it without that sense of mystery. I'll also post a video of the LED effects.
B

that is obscenely cool...
OP
N

Here's a video that shows the 3 modes...

That is freakin' awesome!

+1 on pics in light for details

Incredible build, cool theme, awesome props!
I'd be interested in more on how you fabricated/modded them.

WOAH!!! That's gonna make it a lot harder for me to please myself with some half a***d cable management. LOL Very nice!
OP
N

Thank you everyone! More pics and info to come.

I've updated the timing of the lighting and added a fire effect under the lower level...

Here's more info about this build.. 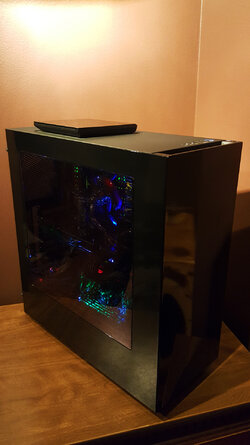 The goal for this project was something not large and obtrusive for in the office but also something interesting to see, so I chose the somewhat small NZXT s340 case. I gutted the interior and replaced all rivets with stainless hardware. I applied 20% window tint to the side panel. 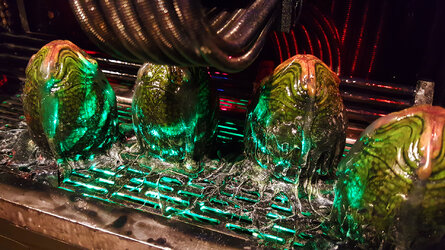 I did not make the Xenomorph. It is a figure by Play Arts Kai. I just applied a mild paint wash and then silicone conformal coating to enhance the contrast and wet appearance. The eggs and facehugger were also figures but they were unpainted plastic, to which applied acrylic washes, dry brushing, and then gloss varnish. For the "roots" at the bottom of the eggs, I simply applied hot melt glue and then applied same paint methods. I was somewhat disappointed that the application of gloss varnish had diminished contrast of the dry brushing because the varnish caused the dry brushing to bleed. But the varnish did make for a more organic affect and overall it's fine. I hadn't done this sort of thing with paints before. I watched YouTube videos on figure painting techniques. I improvised with the silicone conformal coating and hot melt glue. I wasn't planning for the hot melt glue to actually work for the roots of the eggs. I was just experimenting with it for a few minutes and it turned out well enough, so I left it. Had I known it would work from the start, I'd have paid more attention while applying it, particularly I would have used less gobs higher up the eggs. 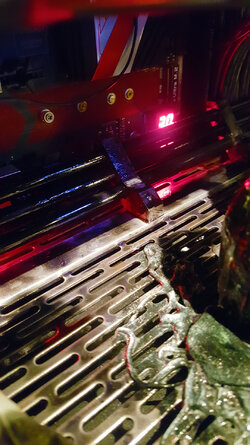 For the lower level flooring, I originally wanted a grating to match the flooring of the Nostromo corridors but I couldn't find any metal grating scaled correctly. I also wanted to use metal because it's a structural component of the case to replace the original frame. I'm happy with the grating I settled on. It's not quite like the Nostromo corridors but it is sci-fi like and it's very sturdy, thick stainless. I applied an acrylic wash for the aged, oily look and silicone conformal coating for the wet look. It's bolted to the case along the back and sides with stainless fasteners. The front side is bolted to long vertical standoffs which are bolted to the bottom of the case. The leading edge is covered with L-channel.

The rear tubing along the back wall of the lower level is just ABS plastic pipe mounted through bases, the bases crudely cut from ABS block in the shape of those of the Nostromo corridors. A 3D printer would have have been nice to bring out more detail of the bases. I painted the bases silver and then acrylic wash and silicone conformal coating. Each base is mounted from underneath to the floor with two allen screws, with flat channel sandwiched in between.

Here's a photo of the original Nostromo corridors for comparison. It's not as "wet" as I ended up with, but I wanted the look of organic overgrowth... 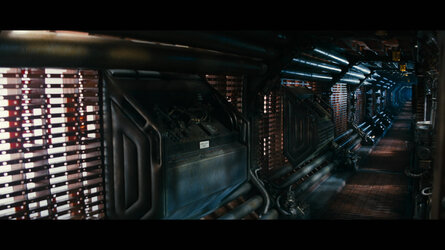 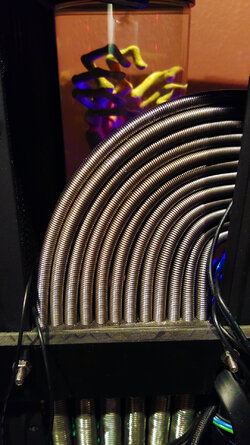 The wires of the main power connector to the motherboard and PCI-E wires to the video card are each routed within stainless steel. These are actually "tube bending springs". The main power connector wires are fed into a manifold cut from ABS block, which distributes the wires in groups of four fed into larger tube bending springs, down to a lower manifold below, which also distributes the individual PCI-E wires to the video card. This view is from the back side, the wire sleeves are unpainted on this side. 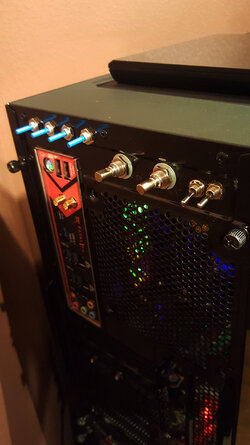 On the rear panel, I've added two three-way switches to turn on the LEDs and added six linear potentiometers to adjust the brightness of the LED channels. I wired the LEDs in groups in series with low ohm resisters for efficiency at 12v. Each group assigned an LED controller and then to Bourns linear potentiometers to adjust the brightness, although I've found that brightness adjustment isn't really needed, except for the CPU block LEDs. I used hot melt to glue the LEDs to the housing and then painted black over the glue.

Much of the goal was to maintain the same sense of mystery as the Alien movies, by limiting the light. So the approach was just as much about shining darkness as it was about shining light. Here's some of the methodologies I sort of adopted along the way...

-Create contrast by limiting the overlap of light sources on surfaces and projecting at an angle which emphasizes texture and shadow in the surface. The optimal light angle for surface contrast is generally within perpendicular to the viewer.

-Hide the light sources so they don't detract from scene.

Other than the LEDs, it's a pretty simple setup. There's really not much else to it. Total weight is 38.5 lbs. Maybe down the road I'd use a microcontroller to control of the LEDs and a speaker cycled with the Alien ambiance sound and then a button-activated self destruct countdown sequence. Although I have other projects to move on to, so this will likely wait a while.

On a side note, when I completed this project I was unaware others were into doing custom fabrication. I then came across an amazing Alien themed PC case, by Ron Lee Christianson. I can't wait to see that one completed.

Nice explanations of the process! Obviously, you have some art skills and nicely applied to a sweet custom build.
You must log in or register to reply here.