Here's where I'm at now. Had a power outage with 1" left to print on the red case part but it's usable so I'ma use it. Need to connect the PSU and load the os. And print the pwr/rst switches 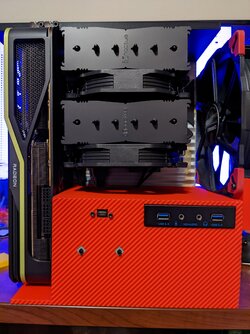 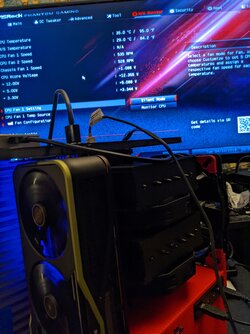 The computer case worked out well. But, I already decided to go ahead and implement Version 2.0 of the design so I disassembled the current build.

I then redesigned Motherboard tray and rear I/O panel to be a single piece only 5mm thick. I know...it "sounds" like that is too thin. It's not. There is very little "stress" at all on the new tray/IO panel because it mounts to the red case portion and the bottom of the vertically-mounted GPU rests on the case bottom (it acts as a stressed member, giving strength to the design)

Drawbacks of the current build, above, are: 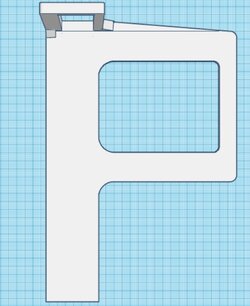 Question(s)... why are you cooling the backside of the motherboard (FX flashbacks?)? There's not a board I've run across (with a 5950X) that needs it.

EDIT: What motherboard do you have, exactly? Googling what's in your signature doesn't come up with anything. I guess if it's an ITX (or maybe mATX), there's an M.2 socket on the backside? That makes sense!
Last edited: Jan 13, 2022

Question(s)... why are you cooling the backside of the motherboard (FX flashbacks?)? There's not a board I've run across (with a 5950X) that needs it.

EDIT: What motherboard do you have, exactly? Googling what's in your signature doesn't come up with anything. I guess if it's an ITX (or maybe mATX), there's an M.2 socket on the backside? That makes sense!
Click to expand...

Cooling the back-side because:

I'm using PLA plastic as the material for the Case/Tray/IO Panel and PLA's temperature handling is less than ABS or ASA filament I want to ensure it gets as much cooling as possible.

Rear-Mounted nvme SSD would not be able to use heatsinks without the opening and, as long as I have a heat sink on it, I may as well use a 140/180 to cool it.

Makes complete sense now! Update that sig when you get a chance!

This has been a blast to follow! Thanks for sharing!

I'll be buying a 2nd mobo & a 5600g for my version 3 case tonight. Won't be able to make it until I finish this one though

Use of the Noctua NH-D15 Heat Sink necessitates the use of right-angled connectors for Front Panel USB3 and 24-Pin ATX. 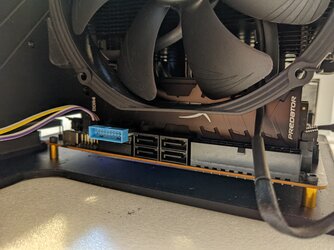 With the re-designed case portion I was able to add grills to both sides. Here's the left one. 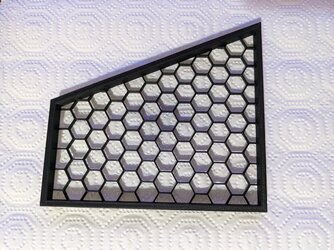 The PSU Portion sits in back and isn't seen so I didn't put much effort into designing it. It's currently printing in Brick Red. 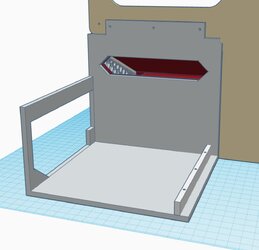 Here's a mock up of what the complete case will look like. I used different colors so you could see the different parts 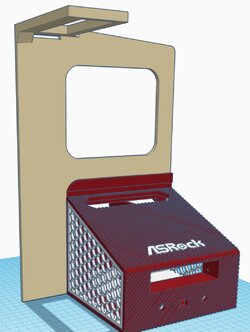 A closer look at the case portion. It used to be 310mm wide (and printed on its side, it required over 68hrs to print. This newer version requires less (barely) than 24hrs (23H59M21S)

I also added a 3.5" drive mount, but I haven't decided 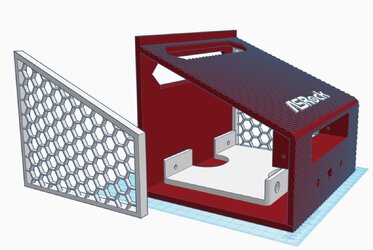 Here are some pics of the PSU Mount. This is the top, where the cables go through it to the case part, then up to connect to the motherboard or the peripherals in the case part. No. Those aren't "defects" from a "bad print". That's the "Brick Red" filament.

The more I see it, the more I really dislike this Brick Red colored filament. 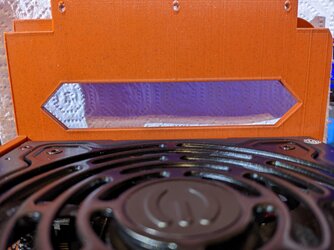 Here's the left side where the power switch and cord are located. I haven't used my jig to mark/drill the mounting screw holes yet... 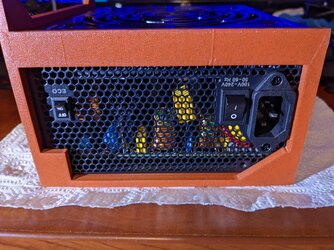 Here's the back side where the cables connect. The piece near the bottom is the retention bar for the PSU. It doesn't use standard screws; It uses grub screws so there are no screw heads sticking out. 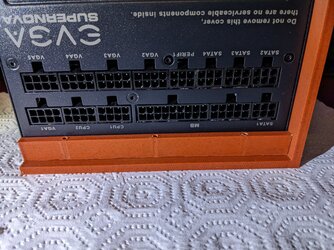 I'm really bummed with the color of this. I had a roll of Brick Red Overture which looked amazing but I ran out due to the extruder gear issue and power fluctuation issues killing my first two attempts at printing the case using their brick red colored filament.

Why not simply order more? I can't find any on Amazon or anywhere else for that matter.

My son had some power issues and other constraints using his 3D printer for long run projects. I have him an older system and he bought a UPS dedicated to it and hasn't lost a project since. :}

Robert17 said:
My son had some power issues and other constraints using his 3D printer for long run projects. I have him an older system and he bought a UPS dedicated to it and hasn't lost a project since. :}
Click to expand...

I had a 1500VA CyberPower UPS about 1ft from the printer but it was still in the box because I wasn't planning to use it for the printer. I was going to move the printer to the part of the room where I could connect it to my 1200VA UPS before starting the print, but I forgot in my haste to get the print started. I paid for it...

The bottom case portion is at 43% complete 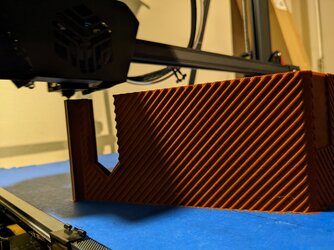 I reprinted the grills for the case on my Flash Forge Creator Pro, using the silver filament I used for my pretty motherboard tray (which I used a 4" hole saw on, marring its perfect finish) 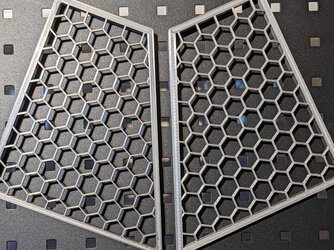 You can't see it in the pic above but I printed the grills on glass so they have a reflective finish to them. This is the exact opposite of the look I was going for with this build but I made the change in direction because while the "Brick Red" filament looks somewhat similar to real brick, it's shiny, not matte like the Overture brick red filament was. Since the case is going to be shiny I decided to make these shiny too.

I'd rather have used matte white on these to make them "pop" better against the brick red filament but I'm out of matte White PLA. All I have are two 3yr-4yr old 3D Solutech spools of shiny white PLA and a roll of Matte White ASA (which works well on my FFC Pro, but I don't want to breath in poisonous vapors)

Here's the side shot of the grill frames showing just a tiny amount of ringing on the part on the left. Not bad considering I've never maintained ANY of my printers. I don't even dust them off for 2-3yrs at a time, lol. I just dust buster them and clean the build plate then throw 'em to work... 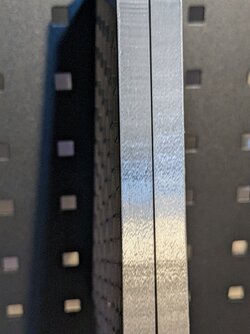 I tried to capture a pic of the reflectiveness of the parts but it's difficult. If you look at it in the right angle, you can not only see the light fixture reflected, you can tell what kind of LED light bulb is being used. (Though that level of detail isn't captured in the pic below) 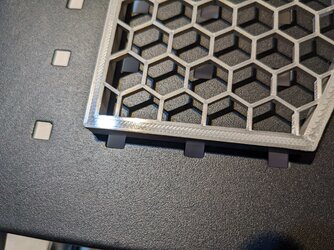 Awesome. Makes me want to get a 3D printer. With my CAD skills I think I could come up with some pretty unique concepts.

Blaylock said:
Awesome. Makes me want to get a 3D printer. With my CAD skills I think I could come up with some pretty unique concepts.
Click to expand...

I have zero CAD skills. I just hack at it until I get something passable.

Speaking of hacking at it...Here are some additional progress pics

Here's the bottom "case" portion prior to the start of assembly. I have inserted the grills on both sides and the USB I/O panel to test-fit them.

One note: Dimensional accuracy on "a" printer may be "good enough" for everything you create using that printer but, when you're fitting parts printed on one printer to parts printed on another you need to have your $h!t straight. The grills are press-fit. They need nothing to secure them in place. I can shake the crap outta this and they stay put without budging a fraction of a millimeter. Same with the USB panel. I'm please with this aspect.

Pictures 5 & 6 show the case's "edge" in a less than favorable light. That side of the case was the side which was on the build plate (Blue Painter's Tape texture) and I did use a 3-line-wide brim 0.00mm away from the print to give it a tiny extra bit of a footprint. Based on how well it adhered, I don't think I need the brim/skirt any longer but I'm not re-printing the part just to avoid trimming the brim off.

The hard drive mount is printing on the Flash Forge Creator Pro right now (because I forgot to print it last night, lol) 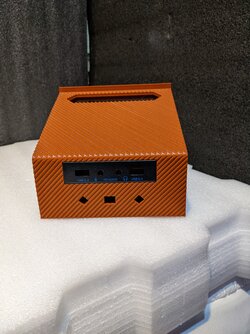 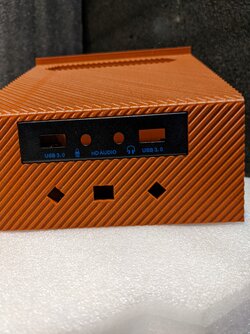 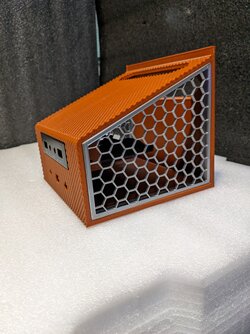 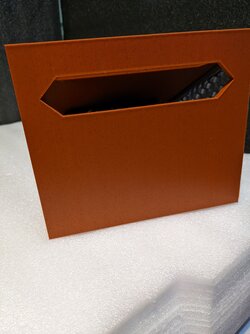 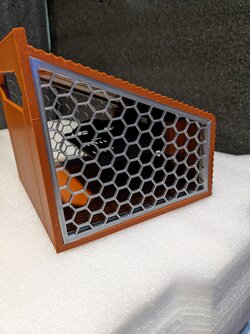 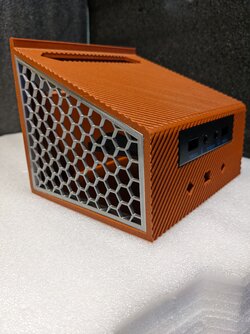 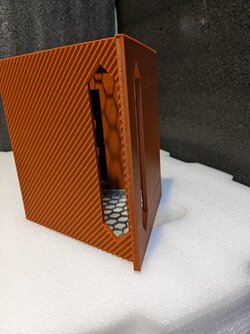 I'll be loading Win10 on it this week so I consider this one done for now...Have mostly assembled this one and will post pics of the completed system later this week when I'm done connecting everything up.

I've ordered the parts for my next build (5700G, 16GB DDR4, couple 1TB nvme SSDs) and the CPU gets here Friday while the rest of the parts arrive Saturday. (4 rolls of filament arrive Saturday so I am not going to run out like I did with the current build above)

The new build is going to be a bit "different"...

That should give me time to design the case this week and get the printing started. 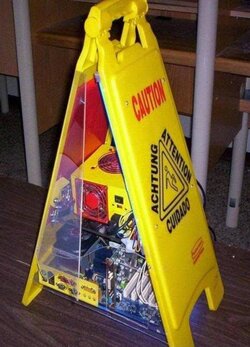