uh oh looks like me gonna buy soon is that for the cg revision new castle's btw?
OP
M

I believe they are for the CG models...
H

Anyone have an estimate as to what the prices will be for Socket 939 A64s around Christmas? That is when I plan to upgrade.

Leviathan41 said:
Anyone have an estimate as to what the prices will be for Socket 939 A64s around Christmas? That is when I plan to upgrade.
Click to expand...

I expect newegg to match and beat them real soon but if you can't wait: 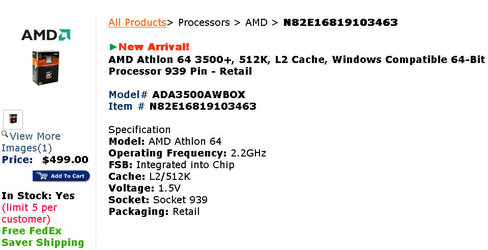 Damn, the new prices are awesome. As much as I want to try out a newcastle (and I do...bad). I think I can hold out buying something new for a while longer and wait for a 939 when they move to the 9nm in a couple months. I dunno though, a 11x multi newcastle 3200+ sure would be fun for me to play with.

Woah maan, just to think I was getting my 3200+ for more!
Thank god i read this thread

There will be according to AMD roadmaps.

So are they new releases or implying some new release CPU's?
Click to expand...

I'm wondering about those CPUs also. A LOT of people are claiming there are 512k 3400+ CPUs around but I haven't seen any.

Claiming we dont need to claim thier are 3400+AXBoxed newcastles on newegg's site have been for awhile, the AX in the name means its a garunteed Cg revision.

The price drops are awsome

Btw for the socket 939 is $365 the lowest the 3500+ will go down to or will they drop even more. I asking because now thats the prices have dropped i may considering putting my 3000 and Epox up for sale on ebay and buy the socket 939.
You must log in or register to reply here.

Did someone at stanford pull the plug on GPU3???

Gran Turismo on PSP anyone?

Offical A64 stepping and Revision Thread. I need all A64 users here
2