Kenrou said:
No one is forcing anyone to upgrade, point is that when you eventually do (if you go AMD) there will be a few hardware combos that offer a performance boost "above and beyond" [emoji106]

Now the ball is on Intel's side to come up with something equal/better to keep people from choosing AMD.
Click to expand...

Im nkt saying they are. Simply put, I'm curious about the performance without the 5000 series b550/x570 combo. I know they were putting their best foot forward (yay, marketing!), but just want to know actual performance, not overclocked best scenario versus stock cards.
B


Some really surprising results with the card even beating the 3090 in some case at 1440p. And that’s all before the smart access memory is enable and over clocking which is pretty good compared to the ampere gpus, but still average.
When sam is enabled there is a nice uplift in performance which is pretty good if you have a zen3 cpu.

Ampere certainly has better ray tracing performance though which will sway people. And no dlss equivalent yet. But with many games still not using ray tracing yet, does that matter? Same with dlss support.

Doubt there will be stock available anywhere though, like the 3080.

mackerel said:
AMD SAM is believed to be an implementation of resizable BAR support driven by Microsoft.
https://docs.microsoft.com/en-us/windows-hardware/drivers/display/resizable-bar-support
In short, traditionally the CPU can only access a 256MB window of the GPUs memory. Older people may remember paged ram access from CPU, sounds kinda like that. To make things more efficient the desire is to re-negotiate a bigger window, such as the entire GPU ram. Given it is MS driven, it seems likely at some point in future both Intel and Nvidia will support it also, with the additional work that might be needed to ensure it works correctly cross-vendors, AMD included. AMD got there first, but I view it kinda like PCIe 4.0. It is a nice to have, and will open up performance potential, but on my list of things to look for, it will be way lower than other functionality.
Click to expand...

Not directly replying to this post, just related to SAM.

It's a rumor thread so I will leave it as one. I'm not sure if it's a matter of BIOS or used CPU but for example, MSI released BIOS for their motherboards with SAM support yesterday, and from early tests (I don't know if the person who shared it with me wants me to say it or not, so I won't say who) there are the same results with SAM enabled or disabled on Ryzen 5600X. I start to wonder if SAM requires 5900X/5950X or it should work fine also on lower chips. All AMD slides are showing 5900X/5950X used in tests. It can be also a matter of BIOS as it's beta.

I see SAM popping up on MSI boards as well. I won't have the chance to test it (no cards in my hands), but that option is there now indeed. I hope it isn't their flagship CPUs either that only does it. Their marketing stated 5000 series CPU. That said, I don't think that's it. The reason being is we saw SAM not work on an MSI board (See our review on the front page, we mentioned it there so Im guessing it was Johan, lol) as well. We didn't have a 5000 series processor and AMD sent us the 5600X so we could test SAM. I doubt AMD would send us a CPU specifically for testing SAM that doesn't work with it.

I'd gather it's a BIOS thing for now.

ye, I was talking with Shawn in last days about some results and settings ... haven't noticed that the article is already up It's still a bit weird that AMD only shows results on 5900X+. Maybe it's a matter of BIOS but there is also a single link between CCD and IO in lower chips and lower cache, what may affect possible performance gains, latency etc. Just some thoughts
OP

Yeah, who knows how it will perform, that's a different discussion. It should work on the chips down the product stack... that's why they sent it as they knew we wanted to test that functionality and we didn't have a CPU.

Since I just posted similar on another forum...


They're near enough the same it doesn't matter. I'll leave it to others to figure out why the differences here, is it the game mix, or other differences in the test systems or configuration. ​Which I'd go for will be decided by other factors.

Sounds like the 6800xt has a chance to break even at 4k with a few driver optimizations. Very tempting. I'm leaning towards a 3080ti just so I won't be missing anything but a gentle breeze could steer me towards the 6800xt. Really nice card.

6800xt looks to be a sweet ocer from what ive read as well. The stock cooler is solid. Its going to give aibs a run for their money as far as not needing to buy a pre clocked unit vs doing the work yourself and saving some loot. Good times!

Recommended over the 3070 by Hardware Unboxed

But that thread is for YOUR review, this is generic ?
OP

Kenrou said:
But that thread is for YOUR review, this is generic ?
Click to expand...

Put more facts here if you want. I'm just trying to keep thread titles matching the content. I don't mind if other reviews are linked in our review thread (IIRC, we didn't with Ampere). This way all the reviews are under one roof... review roof, not rumors.
Last edited: Nov 19, 2020

This is the internet so aren't they the same thing? 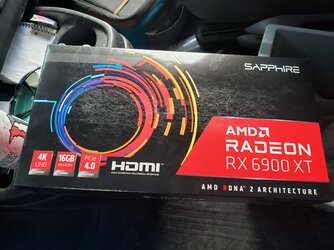 Why do I feel like I just bought a 3lb hammer for driving in a finishing nail. Plenty of RTX 3090s and some 3070s as well kicking around though well out of my prefered price range though after diving 2 hours I might have if they didn't still have this one. This one wasn't listed on the website the Saphire Nitro sold before I got here. Oh well this one will do.
B

Why do I feel like I just bought a 3lb hammer for driving in a finishing nail. Plenty of RTX 3090s and some 3070s as well kicking around though well out of my prefered price range though after diving 2 hours I might have if they didn't still have this one. This one wasn't listed on the website the Saphire Nitro sold before I got here. Oh well this one will do.
Click to expand...

The 6900xt was a stupid card, didn’t fit anywhere. Yet the price of Nvidia cards has made that card viable and it looks good now when you consider many 3080’s are going for $1000 or more.

Since this is the Big Navi rumors thread, there's a rumor I just got a Powercolor Red Dragon RX 6800 XT into the cart at newegg & was able to click purchase!
You must log in or register to reply here.