and speaking of failed, bright ideas

here we see the really, cool new rig I put together, fast, sleek and modern, kind of like making charlies angels drive a pinto. As you might be able to tell, I seem to be having a minor issue with passing IBT.
any ideas?
In this thread we will be teaching an old dog old tricks, that is if we can get it stable enough to do something of value.
when/if we reach the clocking stage the two items I would like to survive are the evga 500b psu and the 9550 gpu, the rest is headed to either the garbage pile or out the door.

Second, some of the 9550's could be soft-modded to a 9600 or better. That could be lots of fun to do with some old hardware! Tech powerful has all the things you need provided you have a working floppy drive & a good disk.

You could stress this in lots of ways. Cinebench will take a good amount of time to complete. It will heat up pretty good.

To test your Memory tweaking and overclocking, you'd run Super PiMod 32m a couple of times. If your memory isn't stable, you'll find out through PiMod. It looks like a decent OC on the memory. 202mhz? Drop the mem divider and push for more bus.

Clock the HT multi down (if you can) for better stability lower the bit width) and feed the Chipset some voltage.

You may need to re-cap a board of that era. Check the capacitors around the power section. Heck, they're cheap enough maybe just replace them anyway,
You can even bump them up a few 1000 farads for giggles if the board has OC options - the screen shot is blurry, but that kinda looks like ECS - there is a very good chance there is a non-OEM BIOS you can cross flash, or heck... those older award bioses were a dime a dozen so the bios editing tools you can expose some fun stuff =)

Always try Control+F1 on random screens of bios in that era... some OEM's didn't take that out.

Good Luck though, and even if the board ends up borked (again, recap! OR make sure the power supply is good) don't throw away the proc... dual-core 939 is hard to find these days.
Still, I bet the board can be salvaged. OR possibly the SDRAM + that chipset don't like each other. Heck try just swapping the slots the RAM is in, swap slot 1 dimm with 2, and vice versa.

I miss that era of boards

EDIT ADD: Does that memory say Xerox? Also I can't see for sure but possibly try 2T Command rate on the memory. 1T is awesome but some chipsets it causes hilarity - and I know yea A64 memory controller is integrated to CPU. The hilarity is that, some chipsets at 1T (others only at high overclock) the CPU and memory work awesome! But when anything else in the system makes memory request through the chipset, the proc says "F-U" and little things like... the southbridge get told to take a hike.

Nothing like the processor flipping the I/O controller the bird. lol
Last edited: Apr 27, 2016

just food for thought, have you thought about a dfi ultra d, expert or venus board for your 939 socket stuff , you cant get better

dual-core 939 is hard to find these days.
Click to expand...

I stand corrected. ebay is showing me $35 buy it now for 939 dual core. I guess they're old enough now the scalpers have given up.

It's an Athlon 64 X2. I'll dig it out and check the numbers again. I had to google it the last time , but I thought that was what came up.

reduced the resolution of the screenshots in post #1, can you read them better?

Temps look good. What you cooling it with?

Too bad you don't have a DFI LanParty 939 AGP board for your GPU, that would be nice with your setup.
Noted the CPU is a later stepping (JH-E6 chip), could be a good one in the right board.
Ultra D perhaps?

I know, you're just doing it for fun and that's OK - Rage on it and show us what your Pinto can do.
OP

so I need to slow the ram?
cooling is with an aftermarket air cooler.

resolution is better yes, i see its a 3800+ not 3600+ as i first thought, im afraid youre pretty limited with this board, unavailability to adjust chipset voltage

ram at 202 is 404mhz, which is pretty good, if its stable then fine, if not drop it a bit and see if the fsb can go up to get you more, imo, you really need a good 939 board to get the best out of it like i mentioned earlier, if you could get hold of an ultra D, venus or expert 939 im sure youd see a marked difference in performances all round

this link might help to have a read on this board

I've got an old ECS K8T890-A socket 939 motherboard on the parts shelf... I don't remember running it much at all back in the day (It was a rather cheap board).... I ran mostly boards with the NF4 chipset. I think maybe I'll try and see if I can get that board up and running again?? I've still got some socket 939 parts that I could throw in it. 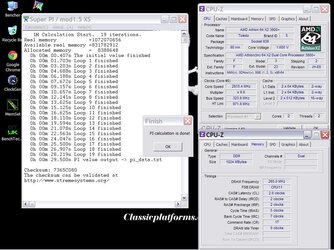 mr.scott is the amd go to man, also i dont know too much about psu readings but they look a bit suss to me, maybe some one that knows could chime in on the psu voltages in your screenie

Can't really go by what software says for PSU voltage. They're never right. DMM is the only true reading.
Good to see you around Shane.

Mr.Scott said:
Can't really go by what software says for PSU voltage. They're never right. DMM is the only true reading.
Good to see you around Shane.
Click to expand...

and you too scotty

i meant to ask whether it could be the software sensor readings mis reading things
You must log in or register to reply here.

[NEWS] How Wii Is Creaming the Competition
2 3 4