Arduino getting a bit of power after disconnecting supply

Alright, I pretty much just got into electronics, and one of my first projects was an Arduino-controlled LED light strip. I wrote some software to control the color and brightness from my computer via USB. Also I have take this article as my reference: http://www.apogeeweb.net/article/55.html

I simply connected a 12V power supply to the Arduino's VIN and GND pins, and also connected the 12V rail to the + connector on the RGB strip. I then drive the PWM signals to ground for R, G and B via MOSFETS. 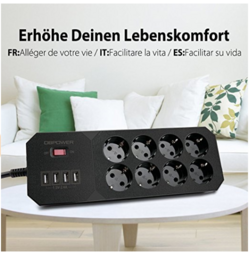 This system is working perfectly, but I have encountered a very strange issue: If I unplug the 12V PSU completely, the Arduino turns off - to be expected. But if I plug it into my extension cord, which has a power switch, and I turn off said power switch, I would expect the result to be same - a turned off power strip does disconnect the line, right? And yet, every few seconds the Arduino's power LED blinks.

It seems to me, that some part of the system introduces a little bit of voltage, just enough to charge up a capacitor somewhere. I have tried disconnecting the USB cable, thinking that the power might come from there, but that did not change anything (the computer that the cable was connected to was turned off anyway, but I thought that maybe some power was still coming through it's USB ports).

I'm not too worried about power consumption or anything, but that red light blinking every minute or so is pretty annoying.. What can I do?

Thanks in advance
You must log in or register to reply here.