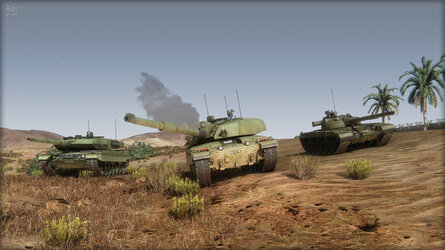 Shameless copy/paste from their forum where a guy gather all the info until now from developers.

Here's What We've Learned from the Previews
So in no particular order, here's the relevant info gleaned form the half dozen or so previews posted in the Preview thread:

From the Boss of Obsidian, Feargus Urquhart

""And the player's going to have to choose how they want to play, and how they want to improve their vehicles. Ideally, the players that are jumping into these tanks, and different types of anti-tank vehicles, they're going to feel a sense of ownership.""

You start with a "fresh vehicle" and add "different upgrades and customization parts".

Co-op 4 player V AI PVE mode where you compete with the other human players for "points and the like" (whatever that is). PVE will be story driven it seems.

Movement and shooting and view controls are very similar to WoT.

Spotted enemy vehicles have a red outline as per WoT.

Tanks have "larger" (ie non realistic) ammo loads - may be selectable though.

Default view is third person, moving to first person for gunnery, again like..WoT. What else could they do though.

"“We want the PvE mode to be a completely valid way of playing the game,” Obsidian designer Rich Taylor said. “It’s not like, oh, well, you play this first, and then you graduate to PvP. If you want to only play PvE, our goal is to have that be a very satisfying experience with full progression available in it.”"

Your crew will be "upgradeable" and will "influence your progress", whatever that means, and will be "characters" in their own right.

Mercenary mode, where you work for a private military contractor and unlock the vehicles they are equipped with.Not sure if this is the primary mode?

Your "base", "workshop" or "garage" will be customizable "with structures almost like an RTS" and will have "some effect" on your progression.

"In terms of progression, Obsidian assures that fans of their deep, gear-laden RPGs of past and present should have plenty to work toward."

Armored Warfare is being billed as “free to compete,” with microtransactions probably including the usual fare of XP boosts and cosmetic upgrades. Karabaich stressed the importance of keeping everyone on a level playing field within an actual match regardless of how much real cash they’ve spent on the game.""

No ponies or princesses.

That's about all I could get from these, please feel free to add anything I've missed or expand on the points above.

So it looks like it will be a WoT with modern tanks and some other fancy stuff.

Yeah, look a lot like WoT but with modern vehicles.
So when is the game be available for the public to download?
OP

No idea, but when I'll receive my download link I'll tell you.
OP

A new trailer from today.

But is it pay to win?

But of all the destruction in the video they didn't drive through a building?

Game looks awesome I look forward to trying it out!


SteveLord said:
But is it pay to win?
Click to expand...

Do you consider the competition pay to win? The phrase is thrown around so much lately I think the pay to win can be deciphered 100 different ways now.
OP

LOL that ended it for me. Definitely not playing another game with arty.
OP

today we’re going to share a little bit about how you’ll acquire new armored vehicles and how you’ll progress in Armored Warfare.

In Armored Warfare, you won’t represent a nation. Instead, you’ll take on the role of an independent private military contractor. You’ll be able to acquire technology from a variety of sources, who won’t be beholden to a particular nation, ideology, or even side of a conflict.

Acting as Commander of your own private military companies, you must conduct business with influential Arms Dealers in order to succeed and prosper. These Dealers are the brokers between defense contractors who manufacture armored vehicles and you, the player, who wants access to the latest and greatest technology on the market.
Click to expand...

And at Gamescom they'll made an announcement about CBT.

While we’re there, we’ll be giving everyone a lot more information about Armored Warfare’s progression system as well as making a very important announcement about the Armored Warfare beta!
Click to expand...

Looks pretty decent. I hope there's a way to turn off those optional/bonus objectives, though (the destroy an enemy tank by collision damage ones). It's seriously damaging the immersion factor for me.

I also hope the free to play model doesn't damage it too much. I remember tribes ascend...
OP

A focus test was running last weekend for 500 peoples (mostly youtubers/bloggers/media guys) and today first movie appears with gameplay from this test.


At a first glance is all that WoT should be in 2015. From graphics/sounds to gameplay/mechanics.
I'm impressed but I'm waiting my invite to CBT to judge the game for myself.
All I can say for now is that AW looks Very promising for a game in Alpha stage.

Wow, this looks almost exactly like WoT down to the garage and placement of everything on the screen. I wonder how long until they are sued by Wargaming (WG) for copying them. It does look very good like an updated version of WoT but I wonder it WG will sue over the similarities? Remember WG has a ton of money from WoT, WoP etc.
OP

TBH I highly doubt that Obsidian didn't take all the cautionary measures for not to be sued by WG.
And yes, from the beginning they said that AW will be very similar with WoT but with some improvements here and there and some new ideas.
I'm eager to try AW. If it delivers what they promise it will be a must have for me.
OP

B
RTX 3000 Series artifacts, black squares that flicker in desktop and 2D mode

D
Anyone thinking of switching companies?