I had to fill in some things like How many workers, etc, etc.
NON OF THEM COMPLY, I'M ONLY LOOKING FOR SOME ANSWERS AND FOUND AT THIS SITES FORUM THAT ONE/MORE OF YOU COULD ANSWER IT.
http://www.overclockers.com/forums/...s-Motherboard-Capacitor-ID-Help-Needed-Please

I was taken out the graphic-card and the next capacitor behind the PCIE connection broke off:
It has a brown cup and with the writings:

I already asked a firm that selles thoose capacitors, but couldn't recognice it.
Does anyone can tell me How or What, or with which one to replace it?

I will ask ASUS too, but I don't know if they will give it to me. Guess, they want me to send it for repair instead.
It's some minutess work to get it done.

I didn't start the pc, because I don't know What will happen. I think it's for the SATA.

Many thanks in advance for all your efforts!
I WANTED TO UPLOAD A FILE, BUT IT DOESN'T WORK.

Hopefully I let you known enough, I'll be waiting for your reply.

Yes a picture would really help. Use the 3rd icon over from the right in the top of the reply box. The image has to be less than 2MB or you can link it from a hosting site.
OP
M 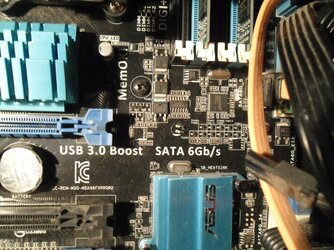 Well, inline before the PCIE port and above TA of SATA, you see 2 little wires, that's where the capacitor was installed.

Many thanks in advance!

I will.
I have the AMD Phenom II x6 1055T, I have the processor set to 265 (AMD Turbo activeted) and runs at 3722-4???, depens of use. On the M5A99FX PRO R.2.0. Kingston 1600Mhz Memory at 17??, choosen bij mainboard, and happy to have Kingston, they switch the memory for a good set, the first didn't work proper in Dual Channel, I got 1600 instead of 1333Mhz. Hyper a little above 2400. Now I need to cool it beter. Working on it. I will fill in the ?? next time. I have to say, the mainboard is very good and the processors can handle a lot more than they use too. If not already is, the firms of the mainboard need to have the fan controles be produced in a matter, that every fan can be set separately.

Actiually I was only looking for the capacitor, but now I'm at it and might be one of you could use it for whatever, I will let you know How & What I did to keep the system cool. And all thanks for helping with that capacitor, THANKS!

Thanks Scotty, I didn't know how to read them but that'll come in handy

There is a guide at Digikey and Mouser to help read those when you're in trouble.

Lower ESR is better.
Slightly higher voltage is acceptable when you can't get a direct replacement.
OP
M

MANY THANKS FOR ALL YOUR REPLIES AND EFFORTS!

The capacitor is 6mm in diameter and 8mm high. 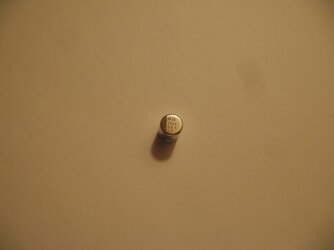 Can the capacitor be soldered to the mainboard?
I need to do it with care anyway, but will it be possible?
Last edited: Oct 20, 2016

Yes the cap can be soldered to the board. You'll need to remove the old pins that are still in the board first though.
Pretty sure that cap you linked Scotty is a surface mount not a through hole
I think this is the replacement you would want http://www.digikey.com/product-detail/en/nichicon/RL80J561MDNASQKX/493-4021-1-ND/2347909

Johan45 said:
Yes the cap can be soldered to the board. You'll need to remove the old pins that are still in the board first though.
Pretty sure that cap you linked Scotty is a surface mount not a through hole
I think this is the replacement you would want http://www.digikey.com/product-detail/en/nichicon/RL80J561MDNASQKX/493-4021-1-ND/2347909
Click to expand...

The cap that was originally on the board is supposed to be a surface mount. At least, that's what other pics of the board showed. Doesn't matter though, you can use any type that fits the application.
Shawn's link is fine. Make sure you get the polarity right when you install it.
OP
M

Kindly I ask your attention.

MANY THANKS FOR ALL YOUR HELP, THE MAINBOARD IS FUNCTIONING AGAIN!

Might be handy, to have an extra tab or something for 'How I OverClocked My System'.

Well, I think that it will not be special or whatever, but here is how I overclocked the system:

AMD Phenom II x6 1055T (6x 2800MHz, AMD Turbo 3x 3200MHz)
ASUS M5A99FX PRO R2.0 (BIOS LATEST UPDATE 2501)
KINGSTON 2x 4GB 1600MHz (Dual Channel tested by KINGSTON)
ATI Radeon HD 5750 (No OC)
Corsair 750Watt with fan, nearly passive.
When installing a PSU where the fan only starts to spin when the load is heavy, remember the fan of the PSU does exaust too, so it does cool the system too. I forgot about it, but I will put two connectors on the outsite of the PSU, one the fan and one the PSU Control. Now, here is the needed trick to have it work properly. What will be needed is some 12 (0-2-14) Volt trimmer/simular to it. The part that is being needed, has to have a power consumption of it's own, to feed the fan and two connections for the PSU and fan commander. It doesn't matter which one will give the most voltage (the PSU or fan commander), the part will feed the fan the highest Voltage input. And when the power is off and the PSU still keeps feeding the fan, it will keep feeding the fan as long as the PSU needs when the system has being shutdown.
The problem is, that I couldn't find that part. Still looking for it, might be that I need to build one of my own.

The processor works with 6 cores at 3700+/4000+
The more above the 3722MHz will happen, when the load is heavier. That's what I conclude when I use HWMonitor from AMD.
For testing I used the game FarCry2. When playing the game, the processor worked above 4000MHz.
First I set 6 cores, than 3 cores and they showed to need 100/95/100%, and 4 cores and still it all needs above 90%.
To have the memory working Dual Channel, I had to switch the memories with KINGSTON. The are tested to work Dual Channel/2x Dual Channel. Mine where 1333Mhz and I got 1600MHz.

There should be programs, or integrated into the BIOS/OS's, so it could be possible to set some cores for which use, and to have the option for use at the startup.
Lets say somebody wants to do low system use stuff, only one/two core would be enough. Lets say two.
When gaming (depending of the game) 3/4 cores or whatever.
It should be done when the OS is active too. Lets say somebody wants to play a game and desides to stop playing and goes on the net or whatever. So, there has to be an option to do so, without shutting down the system. And other wise.
I used the Power Saving Option, but it realy doesn't work that good at all.

When somebody does know to OC this system better, don't mind to let me know!
An upgrade is to expensive, the hardware is to slow and to old. I will need a better cooling system anyway. Still looking!
MANY THANKS IN ADVANCE OF YOU LET ME KNOW THE OC!

Have a happy hobby/workweek & weekend!

There's a link in my sig about overclocking PII/thuban

Only about 2 weeks late brah.
D

OP, if you are still looking for someone to repair the board, PM me.

That cap is most likely not TH. These types of caps can be a bit of a pain to solder back on. 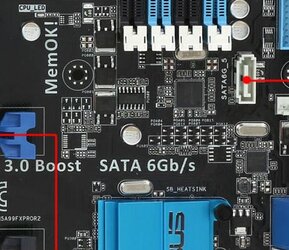 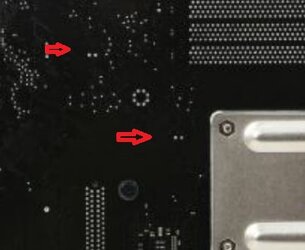 Kindly I ask your attention.

FIRST:
MANY THANKS FOR ALL YOUR EFFORTS, HELP & OFFER!

Mr.Scott, many thanks!
Johan45, I used the link and many thanks!
I soldered it on the board, it wasn't easy I have to say. Heating one and taken it out, letting the board cooling down and again, same with soldering it on the board. What I find on the picture of Johan45 is, that the capacitor is soldered different than I did. When you look at the picture what I posted of the mainboard, you will see that the capacitor designation is at the bottum (according to the little cap designation on the mainboard). This how I soldered the capacitor and it all works well I have to say, till now anyway.
Dolk, many thanks for your offer!
Yes, it was quite a job, a little patience does it.
WhiteHawkEQ, many thanks too!

Hopefully I let you all enough & have fun on the Overclockers website.

PS:
A happy hobby time, workweek & weekend!
Last edited: Nov 2, 2016
You must log in or register to reply here.