EarthDog said:
Well, a quick look at the cards... The ROG Strix has three fan cooler while the 'dual' has two fans. I am not sure offhand if the heatsinks are different but I would also imagine (you would have to look it up and confirm) that the Strix card has a better VRM... but again, not sure, look at some reviews to confirm. BUt that is what is obvious to me without looking it up.

Performance wise, not really... some are quieter than others etc, but, you will have to read reviews and see if that is something you really care about.
Click to expand...

I guess I am going to have to pull a Devil Wears Prada moment.. They all look pretty much the same to me.. hahha Ok i see one big difference is that boost clock speed is different. Is that really going to effect anything for me? 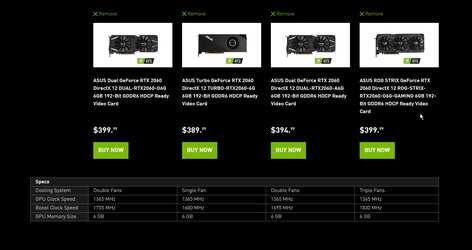 oh and earthdog... my decade badge??? I think I asked in another thread last year but no one caught it then either... so sad....

As I said already... heatsinks, clockspeeds, and possibly the VRM is better on the Strix.

After lunch I will get your decennial badge.

Also check the length of the cards to make sure what you get will fit in your case.

The boost clock will make a slight difference in GPU performance gaming/folding etc. Also as mentioned the 3 fan strix is quieter. If it was me (and I would be gaming) I would pay $30 for the strix over a reference design. On the other hand I wouldn't pay over $400 for any 2060, because at that point you might as well just spend $500 on a 2070.
Last edited: Feb 26, 2019
R

If you want to build a good PC in $1500 with more than 16Gb ram then you'll have to make a compromise on either graphics card or processor as DDR4 memories are expensive.
OP

Alright guys, it has been seven months since I started this thread, but I have finally bought a new machine, it is being built right now. I should have it on Friday or Saturday. I was busy during the first part of the year, then contacted someone to buy the components from but that took two months to settle, way too long... but there is light at the end of the tunnel now.

I went with the following:

For all of this it was about $1700. Does not include Win 10 or Office 2019 which I will be OEM keys for and hopefully that will only be another $100 or so. I spent about $250 on two 6GB HDDs so all in all it will just be over $2000. A bit more than I wanted to spend, but I think I am going to have a kick *** system. Not that I really needed it, but it should last for another 5-7 years I hope. Decided to forgo doing OC with this chip too as I have been told it runs at 55C already, I don't want to deal with the extra cooling issues because my office gets bloody hot in the summer. I think the 3.6Ghz with the 16 threads of the Intel chip are going to be more than enough to do whatever I need.

Cheers and thanks to all who made suggestions!
Last edited: Sep 9, 2019
You must log in or register to reply here.