This might have already been asked but could not find it in search.
I just bought some G-Skill TridentX DDR3-2400 (The Samsung Version) from Funsoul

Thanks Again
I put them in the Sabertooth R2.0 first. I have never had a problem running DDR3-2133 in the board. The BIOS showed the board topping out at DDR3-2133. When I installed the TridentX, the BIOS now showed DDR3-2400 as an option. I picked it at set the base 4 timings as shown on memory stick. Within 5 minutes I would get a BSOD that my Video, NTFS, Ect, Ect Driver has failed. I just took it as the Saberkitty was not made for that fast of memory. I swapped out the R2.0 for the CHVF-Z as it shows in the BIOS DDR3-2400 as an option. I had the same problems with the CHVF-Z as I did with the R2.0.
I have a memory fan running over the memory
I'm using a 2yr old Corsair H100i AIO. I'm wanting to say that this is the problem. With 2 Delta's on it (using the fan connectors on the CPU block) I had to drop my speed to 1600 just to be able to complete my BIOS setup. Once I got it up and in windows I increase the speed to 4000 instant BSOD. I finally got it in performance mode but that only kept it 30c

It has nothing to do with the board, either of them. AMD IMC's are not like Intel's at all. They don't usually like the high speeds. Sweet spot for most is around 1866, and the subtimings that are used on Intel usually do not work in AMD. Due to the fact that most ram is set up for Intel, just setting the stock timings for the big 4 may not work out of the box for AMD.

They will work. You just probably won't get to that rated speed. Not on AMD anyway.
Get them into the 1800-2000 range and tighten the timings as much as they'll take. AMD prefers it that way.
OP

Thanks for your help

Tip:
I've found with some sticks having the same symptoms you are describing I can go in the BIOS and preload the 4GB or PCB settings (Can't recall ATM which one it is), then do a reboot and tweak as I want for getting more from them. The Sabertooth doesn't have an option to do that so it's only useable with the CHV-Z.

I'm not clear as to how it works but it's something in the BIOS, I can hit a wall and after doing this I can then tweak to go higher.
It works with my PC 2400 Trident X sticks no prob at least.

Timings even with this in use are critical so you'll have to mess around and see what works best.
Biggest thing I know of is the chip itself is a big factor, if it's IMC isn't that strong then nothing you do will get you where you want to be.
W

AMD IMC works better with lower capacity memory. You can bench PSC / 2GB modules @2800+ on AMD FX but Samsung / 4GB will run lower. Other thing is that performance is not scalling above ~2133 just because IMC is bottlenecking bandwidth. Best is to set ~2000 and as tight timings as you can. Then set as high CPU-NB as you can.

Add more voltage and you can hit 2400
OP

cdawall said:
Add more voltage and you can hit 2400
Click to expand...

Nope I meant 2400 you can hit that on amd with some work.
OP 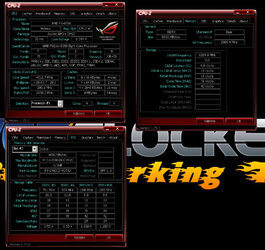 In most cases 2400+ on FX is unstable. I mean you can run benchmarks but if you run long stability tests or play games then it will crash. There are of course exceptions and better chips around but in most cases memory controller just can't handle that.
Other thing is that these chips don't need faster memory but faster memory controller. Only raising CPU-NB frequency is really helping above ~2000 while CPU-NB is limited to about ~2900-3000 on FX.