I'm currently building a system which has an Asus Z170-WS motherboard and I'm using the Noctua NH-U14S air cooler.

Unfortunately the cooler and fans obscures the first PCIE slot, making it impossible to add my graphics card in there. The motherboard has four PCIE slots which are all apparently rated at x16, as well as a x4 slot. Going top to bottom on the board we have:

The motherboard manual shows a chart which lists each slot number and whether it's for a single VGA, SLI, 2-Way SLI or 4-way SLI. Here's a pic: 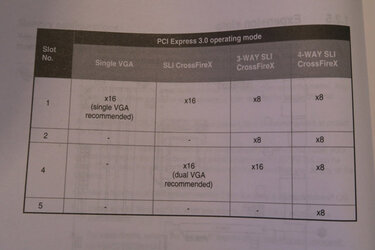 Since it's impossible for me to add the graphics card to slot 1, would I be able to put the card in another slot (I assume slot 4, since that's the next one labelled at x16) and have it run at full speed? Or is this simply impossible when not using slot 1?

I've googled around but not found any answers. Thanks!

Awesome, thanks for your very speedy reply!

You're welcome!
If you need to know anything else about the board, please let me know, I have a fair amount of experience with it from writing the review on our front page
OP
M

ATMINSIDE said:
You're welcome!
If you need to know anything else about the board, please let me know, I have a fair amount of experience with it from writing the review on our front page
Click to expand...

Thanks! It's a bit specific (Intel 750 on this board) but I've been having a lot of troubles getting it up and running, I put a thread Here if there's any chance you have any ideas - I'm all out of them! Thanks again
You must log in or register to reply here.

B
Installing an RTX 3080 in a second PCIe slot: Does it affect the performance?