Back from the dead

Yo foldaholics! It's been a decade since my last wu. In fact I was running super clocked dothans when I was forced into retirement. But alas I have returned. I left in the top 20 and return at 500. Got a huge mountain to climb which is awesome to see. that means many of you have been kickin major tail in my long hiatus

(not even sure that emoj works anymore lol). Anyhow Sadly I don't have the time to research projects like I used to so i have a couple of questions.
Does GFLOPs still reign king in the world of folding? If so I would venture to guess that multi cores with HT balanced with minimal TDP is the holy grail to maximized production. I see that GPU folding is in full affect and it would appear that the points system is a bit lopsided in their favor atm. However it would also seem that looking at the project as a whole, one would surmise that projects tailored for GPUs is also limited. I love the points but I love the project even more. SO feel free to chime in with your thoughts on this.

To give a touch of insight Im thinking of running 6 core xeons (in dual proc setup) much like my old oc'd SMP amds of yesteryear. initial costs is relatively low as well as price per watt being pretty high. This is of course not taking into account the ability to overclock comparable I7's. So your thoughts on this would be greatly appreciated as well.

GPU folding is the way to go. It is almost pointless to run CPU now.

So much has changed, grab as much of a GPU as you can afford and get your fold-on!

Get a cheap CPU and as much GPU as you can afford <-- the way to max FAH points.

On the other hand, get a nice CPU and max Rosetta points (they don't use GPUs).

Either way, welcome back !
N

CPu is not entirely pointless if you have the kit already and the electric costs don't cause too much pain to your wallet. No one has really looked at dual cpu folding for a while beucause the mantra is cpu folding sucks.

Well its not that bad IF you have recent hardware, my pair of ivy bridge 12c/24t xeons at 2.4ghz can pump out 300k per day for less than 300watts from the wall, contributing 25 valuable WU to the project daily. I haven't seen anyone post any numbers for more recent cpu hardware in either 1/2 or 4p setups. It would be interesting to point the current a7 cpu core at some current hardware and see what it gets.

Nathan_P said:
No one has really looked at dual cpu folding for a while because the mantra is cpu folding sucks.
Click to expand...

I've been CPU folding since I sold my gtx970 and got my 2P Surpermicro rig. It can do 250k ppd, which was more than I was getting in a year with 12 machines running, back in the early 2000s.

But, in comparison with today's GPUs folding, the CPUs gets left in the dust.

I sold off some gear and got paypal $$, just considering my choices for some dyn-o-mite GPU value.

Yep things are changing fast in the world of folding. Just imagine when I started in 2004 the Northwood Pentium 4 was a big deal and I started using Celerons 2ghz and 20 of them Borged got me 2,000 ppd and then the quad cores were the greatest thing going. Now the GPUs dominate because of their massively parallel computing power -- all in just 13 years. 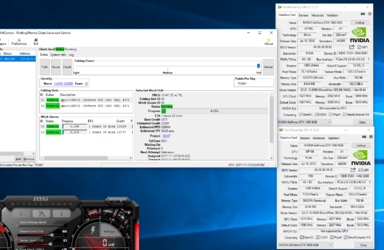 Welcome back walaka7. Glad to see you return to the fold. With the wealth of knowledge these guys have you'll be climbing the ranks in no time

superducky said:
At that point, you're just another ~200 away from picking up a 1080ti and bagging 1mil a day though...
Click to expand...

Thank you all for replies! This gives me some ideas on a roadmap for Xmas time. My desktop is getting replaced (core duo I got for free with a used $20 e8500). Cool thing is I was gifted an I3 6100 and a I57600k. So now I have to figure out if I'm going skylake or kaby lake. I guess Ill put the xeon project on hold for now. I'm fairly certain that Ill go with a 1080ti. I have a daughter that is on 5 different soccer teams so my time is extremely limited. I really do appreciate answering my renewbish question. Team 32 will see some benefits by the beginning of new year.

Black Friday produced some interesting deals. No 1080ti :/. But soon a production increase will follow....

True, I am able to get them for about 600 from direct suppliers via work...
OP
W


And getting $50 in rebates from PSU and vid card
So for the cost of the vid card I wanted, I built a whole system.

Bad news is:
heatsink had defective fan so I'm running a i3-6100 with a stock cooler
even worse news is:
I'm folding with this rig now, but not getting any credit for the wus turned in by the GPU only
I have 6 clients running. I have 2 quad cores at work (the shop server and my laptop). At home I have my worn out core duo and gtx-550 plus this system.
On the stats website, it only shows I'm running 5 clients. Plus in looking at production, obviously its way off. I'm showing anywhere from 350k-430k production on the new GPU. logs indicate the wus are completing without error and getting turned in. Furthermore I know the there are 2 folding servers not reporting credit that they are working on. But the GPU is not running wus from either of those.
I'm glad the the work is getting done and going into research, but this is not much help to the team. Ill probably reinstall the client when I get home tonight. Not sure what else to do.

Being recently setup for FAH, the first thing to check would be to verify the configuration has correct user name, team and passkey.

Older GPU usually fold better on older drivers, if that is an option.
You must log in or register to reply here.

Members we wish would come back.

We have a new billionaire!