My cooling solution isn't ideal - especially given my system specs. I have many fans, but my motherboard only supports 2 controlled ones. Before investing and and installing a PWM / fan controller, I wanted to post to see what others may suggest be the best route for my unique build. I first considered the NZXT Sentry 3, but given that I have a large case with 11 platter & 3 SSD disks on top of other components; thought I might should get something with more than one temperature sensor like Thermaltake COMMANDER F6 or even go for digital control with something like a Nzxt GRID+V2. Three of my fans are also 200mm so also didn't know how much power I may need / use per channel.

Below are the specs for my system which stays on 24/7 plus current temps . It includes a Cooler Master Hyper 212 on my CPU which I'm considering putting new fans on in a push/pull as I read this helps a lot and would like to try to get a bit more speed out of it if safely possible.

Any suggestions? I'm trying to order by 6:00pm CST so I can get next day from Amazon if possible. Thanks!!

How is the Hyper 212 oriented in the case? It should be blowing to the back of the case. Also that rear fan should be blowing out, not in. Your motherboard idling at 52C tells me the case has poor circulation.
IMO you should add another 200mm front intake fan too.

Rule of thumb on case fan direction is front, bottom and side blow in. Top and rear blow out. Of course there are always exceptions.
I have the NZXT Sentry 3 in one of my cases. It is running 3 120mm radiator fans and 4 120mm case fans. I have the temperature sensor in the VRM heatsink of the motherboard, which should be producing the most heat under load.
OP
B

Thanks for the reply...

I honestly don't remember how it's oriented, but will check. I don't think I have room for another 200mm up front, but will look for that; too. Lots of heat in there with 14 drives! Any suggestions for the PWM Controller? Thanks again!

Here's a pic of the black version of your case from the Amazon link. It shows a 2nd front fan mounted over the lower fan. You could cut out the louvers in the side of the front door and along the top edge to allow for less restrictive airflow.

Personally, I'd use my 4.5" hole saw to create a blow hole on top & in the front door, covering them with a couple basic fan guards. That would be louder, but would allow those big fans to really push some CFMs. 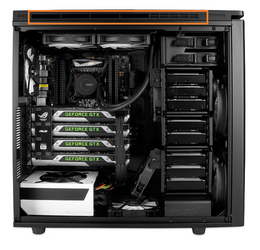 Thanks for the airflow idea. I went ahead and purchased / installed a GRID 2, added a fan to my CPU for Push/Pull, ensured that fans were blowing in the correct direction (rear top one was not), and cleaned dust from fans, filters, and the case where I safely could. Unfortauntely, the Cooler Master Hyper 212 I had purchased a while back only had one fan therefore a single bracket so I used one of the two brackets on each fan, added some padding, then threw a single zip tie around it to make it secure - worked great and is solid. Picture of system with reconfigured airflow below.

Temps are much better now - especially for the platter disks. Prior to doing this, I only had one less fan; but the average temp for a platter disk was ~47 at idle. Now they average ~35! Only thing is I wish I had better software for monitoring / controlling temps. Just made a different post about it here if you happen to have any suggestions...

Thanks again for all of your help! 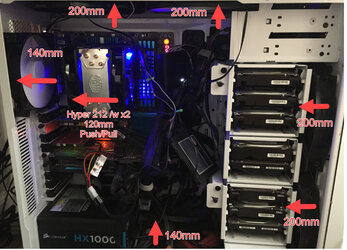