Best X99 board for the money?

Ive just about had it with my gigabyte board
It rarely posts, bootloops, black screen with no errors/no beeping
Tried q-flash plus, all different bios
Its never worked properly, so I dont even think its worth rmaing (it was a free review board anyway from eggxpert so I didnt lose any money on it)
It worked for about 2 weeks before this then I went in the bios and lowered the cpu vcore by 0.02v and it doesnt post any more even after a cmos reset
The few times I got it post just resulted in win 10 bsod's (acpi bios error, and a different random error each time)

Anyway I think its time I bought a good board now, one that actuallly posts
I was thinking something like this
http://www.newegg.com/Product/Product.aspx?Item=N82E16813157543

Or could spend a more and get this (which would go for the gold/black color scheme I was going for with the gigabyte board)
http://www.newegg.com/Product/Product.aspx?Item=N82E16813157534

Anyone have any other suggestions?

Either of those are solid boards, the OCF will push anything.
OP

Would it be worth waiting for the new boards?
http://www.tomshardware.com/news/asrock-taichi-fatal1ty-x99-motherboards,31956.html

It depends if you need any of the features they bring or not...
OP

Now I really dont care about type c and usb 3.1 but another key difference is the 3.1 board comes with the "x socket" aka oc socket with more pins.
Even my crappy gigabyte board has that socket, but the old oc formula doesnt. From what I heard this oc socket/extra pins only benefit when using extreme cooling like ln2, is this true?
I really didnt notice any change in oc performance when I had the switch flipped on.

Stereo555 has the X99 OC Formula Extended board. He's not happy with it. I'll shoot him a pm and point him to this thread.

I just got an Asus X99-A/USB3.1 (and 5930k) at Fry's last week and don't like it at all. It takes 30 seconds just to post with nothing but the internal SSDs plugged in. I also don't much like that SATA7-10 are logically BEFORE SATA 1-6, so the EFI system partition drive has to be plugged in to port 7, not port 1. Every third reboot or so it claims "overclock failed" (despite no overclock at all) and hangs there telling me to "hit F1 to enter setup" (which just points to bad design, since "enter setup" is F2 or delete normally, and F1 doesn't do anything at all unless you hit this "error" state), and then setup takes 15 seconds to show up and then 30 seconds to reboot again. I'd say avoid that one when looking for 'best for the money'

EDIT: Replaced the Asus X99-A with a Gigabyte X99 Ultra Gaming today, and it is vastly better. Not nearly as many options in the firmware, but actually boots in just a few seconds like boards are supposed to do, and has much nicer on-board features.
Last edited: Jul 13, 2016
OP

Anyone have any other suggestions or comments? Looking to buy the board soon, there is not alot of oc formula reviews unfortunately, alot of extreme4/6 and fatality reviews though.

If you are going subambient, I would say get the OCF, otherwise, an extreme 6 is plenty for ambient overclocking. If you don't need the 3.1 connectivity, get the one without it.

Joe88 said:
Its never worked properly, so I dont even think its worth rmaing (it was a free review board anyway from eggxpert so I didnt lose any money on it)
Click to expand...

Of course you should RMA it. It'll only cost a few dollars for shipping and a few minutes to pack it up, and at worst you could sell it for $100 on eBay.

I've been running the same mobo for 8 months or so with zero issues. It was an open box from Microcenter that only cost me $70 after rebate so someone returned it with some kind of issue. I bought some open box RAM (EVGA 4x4GB DDR4-2666) to go with it which also works perfectly. The CPU was bought used on this forum. You just never know with these things, but I don't know why you wouldn't RMA it since its not a big effort.
OP

I will eventually but I just dont want to rma to use it again was the main point.

I don't know why but it seems they can't put out a bug free bios. The problems I was having are pretty wide spread across all the gigabyte x99 boards looking through all the gigabyte support forums on their offcial boards and tweaktown forums. Even the z170 boards are having problems, bootlooping, booting to black screen with no post or error beeps. Also its rather silly not to have a switch to switch to a secondary bios chip, instead theres some chip detecting if the board fails to boot and flashes the backup bios to the main bios chip, this technology rarely worked however.

It just seems like the quality of gigabyte boards went downhill, my old P45-UD3P is still working fine and never had a problem with it. Sadly this didnt even last 7 months (technically it would be even earlier since there has always been weird bugs, glitches, bootlooping, ect going on since I got it)
Last edited: Jul 12, 2016
W

yeah but that was pretty much useless, took 7 days to get a response and more or less equated to did you turn it off an on?
W

Sorry to hear that, I'm going through problems with my creative sound blaster Audigy 2 ZS sound card not working well with sleep mode on my new Gigabyte board.
W

Joe88 said:
Now I really dont care about type c and usb 3.1 but another key difference is the 3.1 board comes with the "x socket" aka oc socket with more pins.
Even my crappy gigabyte board has that socket, but the old oc formula doesnt. From what I heard this oc socket/extra pins only benefit when using extreme cooling like ln2, is this true?
Click to expand...

OC socket helps only in cache frequency. Standard socket let to set max ~3500-3700MHz. OC socket let you set above that but mainly for benchmarks as it won't be really stable above 4000MHz.
Cache frequency affects memory performance more than memory clock itself. There is of course some balance but in short it let to achieve higher max bandwidth ... when memory runs at higher frequency.
Out of benchmarks you won't really see the difference.

From ASRock only 3.1 versions have OC socket. I have X99M Killer 3.1 and it works great. Actually I have Rampage V Extreme to my brother as ASRock was better for me.
I don't know what about regular ASUS boards but I was testing couple of MSI and all were working good. At work I have 3 small servers set on MSI X99 Raider which are working 24/7 for long months. X99 Raider is one of the cheapest X99 boards on the market but it doesn't have OC socket.
I don't like anything new from Gigabyte. In last years they keep failing design of motherboards and later they release new PCB revision rather than fix issues with first revisions.
Generally almost all X99 motherboards will be good as most have similar features. The difference make only additional controllers, board layout and OC socket.

It takes my 5820K as high as it can go under ambient cooling.

Almost all X99 boards are overclocking CPU the same. The main difference is in memory overclocking and additional features. All X99 motherboards supposed to be high end. 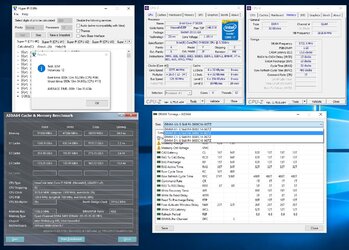 I don't even have quad channel kit for tests right now. These both kits went to my brother's PC and I bet he left them at auto

They just don't scale at all above that, never mind the voltage...

I could not tell if it is the board or the sticks though !

Sorry for your pain - I'm running BIOS F2b with no issues on my UD3P. I previously built a system with a UD4P with no issues so I have no complaints with Gigabyte X99 boards. Both systems ran i7 5820Ks @ 4.3 GHz.
OP

DaveB said:
Sorry for your pain - I'm running BIOS F2b with no issues on my UD3P. I previously built a system with a UD4P with no issues so I have no complaints with Gigabyte X99 boards. Both systems ran i7 5820Ks @ 4.3 GHz.
Click to expand...

I was running the F2c bios originally, because of oc settings being reset when you come out of sleep mode. However there was an annoying bug where if you entered sleep mode twice in a row without a restart, the board would just reset it self and post, this got pretty annoying real but I just accepted it.
Then the when I tried to flash the newer bios to get rid of the sleep bug, the board bricked its self and the bootlooping started occuring. The bios backup function never engaged, q-flash plus was useless.

I did eventually get it to work because I shorted out the SI and SCLK pins on the main bios chip to quick start the bios backup function. So I was still stuck on the F2c bios, and couldnt update to anything higher as it would brick the board again. Then the bootlooping started happeneing again for no reason. It would bootloop for about 30-50 times before posting, and I just accepted this...

Then the bootlooping yet agin but this time it would never post, I managed to get into the bios using the bios chip short method, and tried flashing the newest F22 bios. This somehow worked and the board bascilly functioned as it should have to begin with. No bugs no glitches everything was working great. This was shortlived as it only lasted 2 weeks then after lowering the vcore by 0.02 and it never posted again and board was hard bricked, the q-flash plus function doesnt even work anymore.

So that was the story more or less I went through, and all the trouble this board has given me over the past 7 months. And a side note as far as oc goes, I couldnt get past on 4.3ghz on the board, its a j batch chip so it should do better then that. Guess I'll see what the asrock board can do.
You must log in or register to reply here.

T
How much testing to consider memory 'stable'?