Hey guys new to the site well not really was a member since long ago but did'nt post much and forgot my old account/e-mail Anyways. Been building computers for quite some time 20+ years ,lol yes im that old anyways enough of the old guy B-S.

So this is the 3rd build I have done with the Godlike WB from bitspower. I Have now completed 3 builds with this block and every time it's the same old story getting the debug code of 04 on the south bridge, so with the first build this took me a couple of days to figure out the problem with this block. there are 4 screws on the block 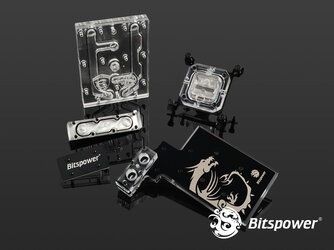 there are 4 screws on the lower block (Msi Dragon) anyways on bottom left screw/nut it comes into contact with a solder point on the mobo first one I thought, OK, maybe a fluke was able to fix it with some make shift shielding. mobo #2 same exact thing, sent bitspower several e-mails explaining the situation, of course no response. # 3 board here we go again same old crap with the block the design flaw has not been fixed yet with the screw/nut on the block.

My question is has anyone experienced the same issue that i have had with this block or maybe I'm doing something wrong with this particular block?

I won't even get started on the led lighting for this block that has zero explanation where to place on the blocks, just took time to figure out placement of them to look correct.. just have to mod it a bit to get that look you like

Yes I have tested each board on a test bench with just the cpu block on, never ran into a posting problem yet the boards have been solid, the block however has some issue's

Maybe i'm over looking something with this full cover WB

Thanks for letting the old guy ramble on!!
Coleman W.

Are you thinking its a grounding issue and what is the error message for that code on the MB?

back to the forums btw.
OP
E

Yes, not sure if the code is relative to the grounding issue but every godlike has thrown the same code out. and as soon as I put the shielding on problem solved. but with paying $199.bucks for the block, you would think this would not be a problem or be solved
You must log in or register to reply here.