To start, heres the gear ->

At this time, I'm seriously debating on getting another 1070 or not. I'd like this setup to last a really long time, and I dont really wanna be swapping out parts... like ever. Right now a 1070 is MORE than plenty for my uses, but Im not sure how long that will last at 2k. I still have to receive some parts, so I have some time to think.
OP
B

Some of the "goodies" going together. Big thanks to Witchdoctor for taking great care of his stuff and offering it a great bargain. 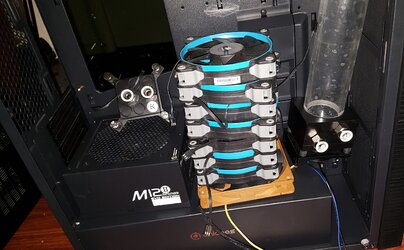 Actually took me a few months to decide on a case. I wanted something open, but not too "cheesy". I was ok spending a bit of cash, but not 400$ for those boutique cases. Enter -> AI Crystal.

Obviously, I haven't built in it yet, but from what I can see, it has a LOT (read : A METRIC @#$%-TON) more interior space than my R5, despite having similar case dimensions. For air cooling, the R5 is really tough to beat, but once you start mounting rads, it's quite cumbersome honestly. Back to the AI, this case is absolutely no nonsense. No expansion bays up top (that I dont use...), no massive HDD arrays (which I USED to use, but no longer need), hidden mounts for SSD's, cable management appears to be formatted very nicely.

I do have some niggles about it. The back side (where the wires show) is tempered glass as well, and you really dont get much room for wire management. I will have to be quite fastidious about where Im placing wires, but I feel the secret is minimizing the amount of wires used anyway. This case would be near useless on a non-modular power supply. Even a semi-modular would be difficult I would think. Next up is that damn PSU/HDD shroud... I dont know what genius said "oh lets cover the psu and hard drives in the same shroud" but blah. I'll be doing some surgery I guess, so its not too bad. This shroud is nice, but doesn't allow bottom mounted fans nor rads. I will most likely be modding the bottom to include a 140mm intake fan. The filters are also mounted in a silly fashion, Im not thrilled with them. I will probably mod them to velcro, as the crappy magnets aren't doing a very good job.
Last edited: Nov 26, 2016

2k? 2560x1440 you mean? 2k is literally 2048x1080. If you don't want to swap out for a couple years at that res, you should be fine with one. I'd bet towards the end of that 2-3 year tenure in your system, it would get long in the tooth though. On the other hand SLI can sometimes be problematic in many ways from improper scaling, to heat, etc. Choose your poison.
OP
B

2k? 2560x1440 you mean? 2k is literally 2048x1080 IIRC. If you don't want to swap out for a couple years at that res, you should be fine with one. I'd bet towards the end of that 2-3 year tenure in your system, it would get long in the tooth. On the other hand SLI can sometimes be problematic in many ways from improper scaling, to heat, etc.
Click to expand...

I am not wanting for power the moment, and I haven't even overclocked anything yet. I'm thinking you're right. My next computer will be a clean slate build.

Had the wife cut this out for me, its the Reinhardt lion from overwatch game, but I think its pretty damn cool. This is just a piece of paper for dimensions and size; I will cut out a vinyl template and use chemical etching solution to actually frost the glass. When the light hits it, its gonna look incredible. 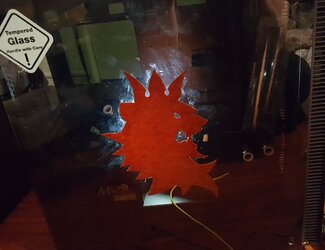 Can't wait to see how this turns out

So, went a different route... mirror! I'll clean it up tomorrow when its fully cured. 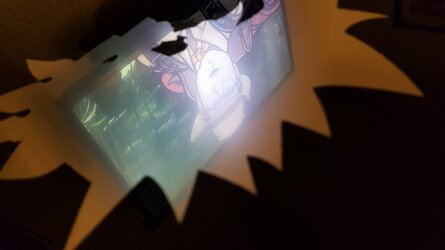 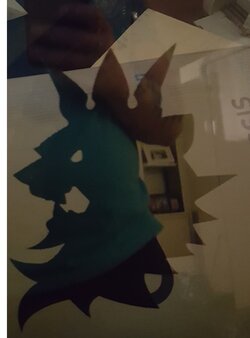 Did some distressing on the image, Im digging the effect. Cant wait to see it with back lighting. 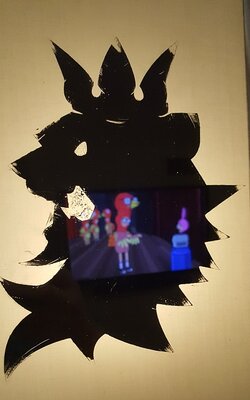 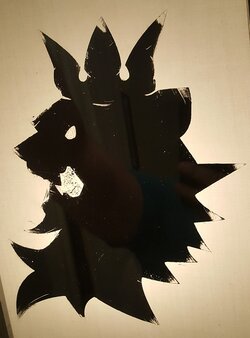 Sleeved the wires, and "brushed" the reservoir. Should look nice with some back lighting 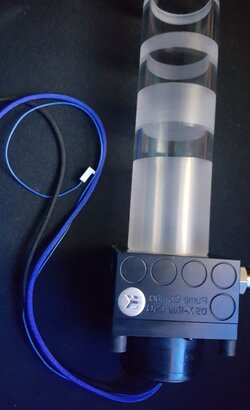 Looking really good I like the side panel so far.
OP
B

I decided on a "bahamut"-ish style for the front panel. Rough cut to verify dimensions. 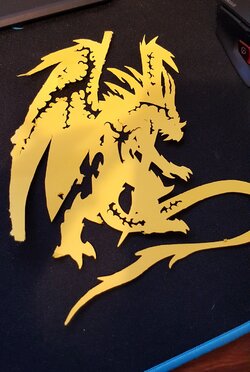 And here we are. Cut from texalium, put on the back side. I am curious how the aluminum will scatter the light (maybe give it a soft glow, I dunno). 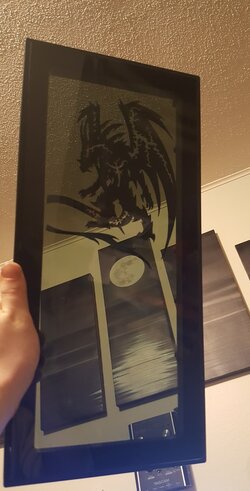 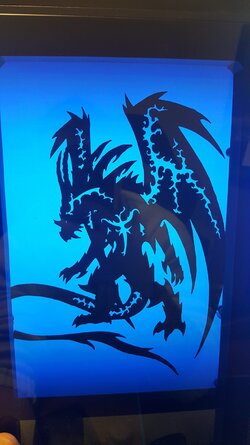 Started shaving the I/O panel. The epoxy will be cured tomorrow, so then I can sand it and give it a proper finish. Should come out really nice. Also, as to not waste usb ports (I dont ever use front usb ports, as they are too easily damaged), I will be relocating the usb ports to the bottom of the case on the back side; a quasi pcie type thing. 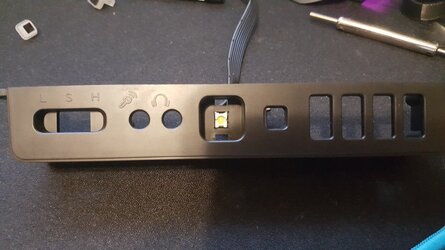 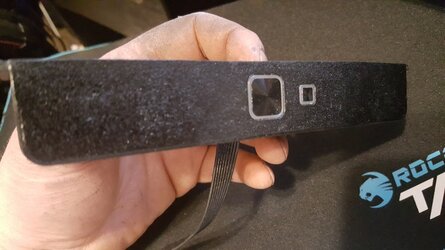