EarthDog said:
Im working with the Elite now... but haven't dug in yet. So far so good though with a 3700x.
Click to expand...

DaveB/Blaylock, I was right! 3700x chip for those Giga mobos! Reference - https://www.overclockers.com/forums...ou-get-today?p=8120870&viewfull=1#post8120870
ED - if you're doing a review on those mobos, drop me a line when you post it; most definitely interested in your thoughts on the Elite.

ED covered the mobo part. Yes, the Elite will be able to handle 2 pcie nvme drives.

Bustos said:
DaveB/Blaylock, I was right! 3700x chip for those Giga mobos! Reference - https://www.overclockers.com/forums...ou-get-today?p=8120870&viewfull=1#post8120870
ED - if you're doing a review on those mobos, drop me a line when you post it; most definitely interested in your thoughts on the Elite.

ED covered the mobo part. Yes, the Elite will be able to handle 2 pcie nvme drives.
Click to expand...

I bought a threadripper board which will handle 3x M.2 @ PCIe x4 but that's going to be different than any of the R7/5/3 boards. I think that the new Gen 3 Zen2 chips only support 24 PCIe lanes with 4 being reserved leaving 20 lanes exposed. 1 GPU and an x4 M.2 would eat that up right?

Also, I see that there is a U.2 standard which seems to be M.2 in a 2.5" format to allow for a greater number of memory chips?

U.2 has it's own ref clock pinouts, which m.2 doesn't, removing that requirement from the board makes it theoretically twice as fast. Intel's NVMe SSD 750 pci-e card HD had one other option, the SFF-8639 (small form factor) which is now called u.2.

"With prices dropping, does anyone have, or considered, using two NVMEs or two SSDs? Or one NVME and one SSD? "

I plan on using 2 nvme's in raid1 (mirror) via one pci-e 3x4 card, as boot and vm's on a nas. There are 2 std m.2 slots on the nas board along with 4 std hd slots. I will probably put a wireless AP in the other pci-e slot and IF I ever go 10GbE, I'll replace the pci-e nvme raid1 card with the pci-e 10GbE card and then use the 2 m.2 std slots instead. Probably won't make that big of a difference in speed but I've been dying to run nvme's anyway. I'll also put my 2 wd reds in raid 1 as well. Backups will consist of snapshots to the raid1 reds.
Last edited: Jul 17, 2019

Thanks for the info on U.2. My MB manual references an add-on card for U.2 which disables one of my M.2 slots. I've only seen a little information on the U.2

I'm not sure that putting two x4 M.2 drives into a single expansion card will net any benefit. Maybe it will but it seems like the card will be limited to the same x4 as any single M.2. What am I not seeing?

It depends on what slot you plug the AIC into. If you plug it into an x8 slot, you have plenty of bandwidth for two drives.

Gen 3 Zen2 chips only support 24 PCIe lanes with 4 being reserved leaving 20 lanes exposed. 1 GPU and an x4 M.2 would eat that up right?
Click to expand... 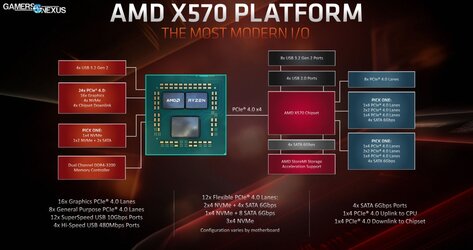 So the chip has 28 lanes with 4 being reserved for chipset downlink. The middle claims another 36 lanes vis a 4 lane bus but it varies by motherboard which tells me that a chipset is doing some voodoo magic. Finally, on the right it boasts up to 16 additional lanes with maybe 8 of those as uplink and downlinks. The middle set of 32 and the right set of 16 all pass through the same 4 lanes to the CPU?

I think that some of these numbers are repeats upon themselves when talking about uplinks and downlinks. This is causing my head to hurt. Make it stop.

So the stuff that comes from the CPU is clear to me. Everything going to the right seems to be connected via 4 lanes. The rest seems like it would get bottlenecked there.

That is just the communication line to the CPU. Intel has DMI, which is PCIe 3.0. BUt there is lane sharing going on, yes. When you use a SATA based M.2 or sometimes PCIe M.2, SATA ports will be disabled.

"I'm not sure that putting two x4 M.2 drives into a single expansion card will net any benefit. Maybe it will but it seems like the card will be limited to the same x4 as any single M.2. What am I not seeing? "

The qnap nas dual nvme pci-e card (there is a quad card AND one with dual nvme along side a 10GbE port) I want to get for the 970's I was thinking raid1 would be good in a nas for the specific purpose of redundancy. The quad card is suited for x8 lanes which my box isn't. Technically you could simply add more storage but I believe the cards are specifically for raid configs in qnap nas boxes (db caching as well-albeit I will not use for cache). The card does not support anything but the nas or linux, no windows boxes, and supposedly vm's and containers run in a memory like process to begin with and the pci-e lanes are recommended for thus as well. Why the dual raid1. If I'm missing something someone please chime in. I am a total newb with networking, raid, and nas boxes.
Last edited: Jul 19, 2019
OP

Again, thank you for your responses and sharing your storage set ups. Learned a few things along the way.

Looks like I need to review my storage options a bit more. The more I think about it, the more I believe I’ll need more than 500gb for the storage drive. Getting one 250gb and one 1TB pcie nvme drives may be beyond the budget I’ve set for it unless I go with a low end brand. May step down to SATA SSDs instead, like the 860 Evos. ~$200 at current prices depending on M.2 vs 2.5” forms.

From what I can tell, the M.2 versions of SATA SSDs run at the same speeds as the 2.5” versions. Is this generally true?

From what I can tell, the M.2 versions of SATA SSDs run at the same speeds as the 2.5” versions. Is this generally true?
Click to expand...

Yep. Check out the specs... they are limited by the SATA protocol.

Honestly even SATA to NVMe isn't as noticable as you might think. Maybe for very large files it is, but for the majority of tasks for your hard drive they are fairly close.

Yeah. So I have my new Samsung 970 Evo Plus NVME installed and my old PNY SSD that was my main drive installed on my current rig. I did a quick test of the two drives and the NVME is WAY...… faster. In bench marks. I'm not sure that I feel the difference when loading my Total War game which still seems to take forever to load. I never put a stopwatch to it but when I'm ready to play.... I mean I'm ready now!

My main storage for video, documents, music is still my old slow "green" 1.5 TB spinning drive. I do not have any trouble loading or playing video from it.
OP

I’ve watched a few YouTube videos on game loading times for NVMe vs SATA SSDs vs HDDs. NVMe beats SATA SSDs every time by a few seconds on average. IIRC, highest difference between the two was 6 seconds. I can live with that and have my two separate drives.

What I haven’t seen yet are Gen 3 vs Gen 4 NVMe game loading comparisons.
You must log in or register to reply here.