From Newegg:
G.Skill TridentZ RGB F4-3600C16D-16GTZR 2x8GB 3600 DDR4 RAM (had a different kit but one stick was defective, replaced with this kit because Samsung B-die)

So that's the parts list so far. Everything should arrive on Thursday. I'm excited to complete the build and experiment with the new platform! I'll be posting pics along the way, of course.

Edit: If anyone can help with a name for this project, based on the parts list or just any idea that pops into your head, would be appreciated. The thread is open to suggestions!
Last edited: Mar 12, 2017

That's actually a cool name. Your avatar brings some ideas to mind as well...

Both Amazon and Newegg are trying to **** me off, dragging their feet on some of my items. The GPU, pump/reservoir combo, fans, and case may not arrive on Thursday. And that's sad, because the CPU block is going to arrive on time in the US all the way from Slovenia (it's actually going to arrive a day earlier than the web store predicted).

Edit: Yes, you do see the Thermaltake case in the list twice. I'd rather order it twice and get one of them on time than wait the extra day (I'm an impatient mofo). I'll just return the one that comes in late.
Last edited: Mar 1, 2017
OP

Okay. It now appears that everything from Amazon, EKWB, and Newegg, is going to arrive tomorrow. Whew! I'll be picking up everything from the MicroCenter list tomorrow after work. I'm hoping I'll be able to reserve the mainboard on their web site in the morning, but we'll have to wait and see.
OP

Any advice on whether to use Copper+Acetal or Nickel+Acetal for my EK-Supremacy EVO block? I have access to both.

MNMadman said:
Any advice on whether to use Copper+Acetal or Nickel+Acetal for my EK-Supremacy EVO block? I have access to both.
Click to expand...

I personally like Copper and Acetal since Nickel has a chance of flaking off but most of the time it's fine from what I've seen.
OP 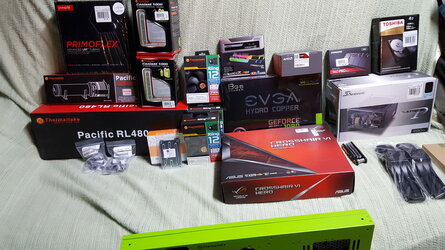 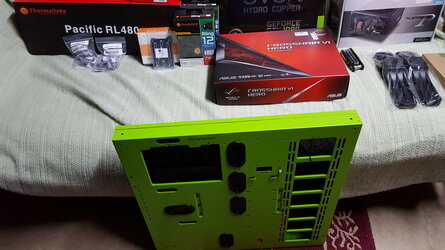 The beast has evolved into a predator that walks on two legs... 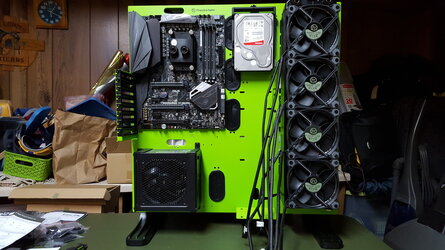 Will be finishing it tomorrow.

And yes, I am aware that the radiator airflow direction is reversed compared to "traditional" mountings in the P5 case. I'm doing that to take advantage of the dust filter and because others have tested and temps are lower when pulling air out of the case. I find it acceptable to see the slightly uglier rear side of the fans for the increased cooling performance and less dust.
Last edited: Mar 4, 2017

Looking good madman. And I agree with the function over form call most times.
OP

All hardware installed. Loop complete. Crossed the tubes on the CPU block because I was stupid and didn't notice that I was installing the block upside down. Not bothered enough to put it the right way. 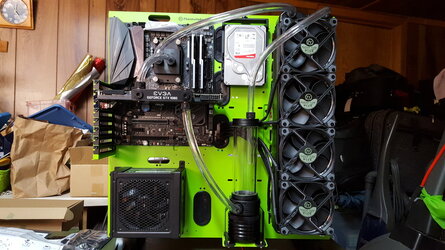 This case has been a dream to build in. Might have to switch to using fancy test benches like this for every build.

The most difficult part was getting that tiny screw for securing the M.2 SSD to the board to actually screw in.

Question: Is Thermal Grizzly still one of the top TIMs? That's what came with my CPU block, so I used it. The last I heard it was good, but that was a couple of years ago or so.
Last edited: Mar 4, 2017

Grizzly is a very good TIM and should work well for your application. Personally I would switch your block over. I know it's a PITA but you will get better results with the cool water being forced directly onto your block base rather than just pulling it across, if that makes any sense.
OP

Blaylock said:
Grizzly is a very good TIM and should work well for your application. Personally I would switch your block over. I know it's a PITA but you will get better results with the cool water being forced directly onto your block base rather than just pulling it across, if that makes any sense.
Click to expand...

I should have worded my statement a bit better. I'm still using the correct inlet port on the CPU block. It's just that the inlet port would be on the left if I had mounted the block correctly, and the tubes would not have needed to be crossed.

A couple of hours into leak testing. I've already shut it down several times to help with getting air bubbles out, and the last time I also tightened all the fittings a bit more. No sign of any leaks. 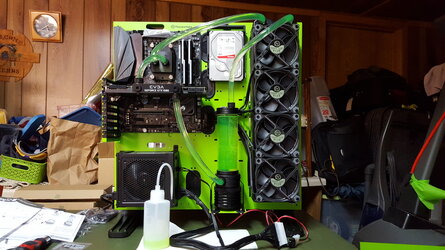 I'm going to go get something to eat and when I'm done it'll be time to wire it up and fire it up. I don't do the whole "24-hour testing" thing. This is actually the longest leak testing I've ever done. But don't tell anyone, okay?


p.s. I don't do 24 hour leak tests either. Shhhh it'll be our little secret.

24hrs are recommended but everyone can do as they may. Sometimes leaks are very slow and can take hours to show up. I had one of those once.

As for the tube crossing, I see what you're saying. It would give it a more cleaner route but I think it's fine. I'm sure you'll find another time of adding or changing where you could correct that.

Nonetheless, your build looks good and coming along nicely.
H

Good stuff man, were you able to boot the stuff up and run systems on there? Apparently its best to leave the memory speed at 2133mhz for now, OCing it might cause all sorts of problems.
OP

Finally got the chance to wire everything up. Did my best cable management ever. Disconnected RED Glare and power-lifted it off my desk. Lugged the new system into place and connected up the peripherals. Switched the power supply on. RGB LEDs light up and start shifting colors. The CPU LED lights up green. I smile, as both are good signs. I hit the Start button on the board...

...and nothing happens. No fans, no pump, no beep (I hooked up the speaker), no POST codes. Nothing.

The RGB LEDs continue cycling colors. The CPU LED is still lit up green, mocking me.

And now I have what could possibly be the biggest and most expensive paperweight ever on my desk.

Just connect the bare essentials and start from there.
H

Did you update your bios to the newest version? There is a heck lot of problems with the memory slot on the ax370 motherboards (least for the vi hero and aorus k5 gaming) if the memory isn't on the QVL for the board.
OP

GTXJackBauer said:
Just connect the bare essentials and start from there.
Click to expand...

I know. Just wasn't looking forward to ripping it apart and going through the troubleshooting process. It could be the board, the CPU -- hell, it could even be the rubber insert between the backplate and the mainboard. Somebody else on another forum had booting problems until they removed the center portion of the rubber insert. And I did it the way EKWB tells you to -- leaving the center portion intact. I didn't see that guy's post until after I had this problem, of course.
You must log in or register to reply here.

I
Water Cooling a Workstation PC