Hello everyone. I have been working on this beast for the last few days and thought people might want to see this. This will be my new primary PC for my office and will be finishing it over the next week or so. I am have some cool things planned for it, including some 3D printed mods for the TT Core P5 open air case. Here is the part: (I still need to think up a good name.... "OverKill" would be fitting, but I am open to suggestions.)

This will also be my first custom water cooling loop, so I am open to any suggestions or thoughts if I am screwing anything up. Thanks!

I am going to try my luck at bending PETG for all the hard tubing. The rest of the fittings are EK-HDC 16mm G1/4 - nickel. I got the PETG from EK as well, figuring that would keep me from having any issue with tube dimension and fittings.

I am debating on adding a 240mm radiator along with the 480mm. (Decided to see what temps I get from the single 480mm first)

Here are a few pics of what I have together so far. I am waiting of EK to send me a few more parts and still have a few items coming from Performance PC.

The last picture is a 3D printed 120mm fan shroud. It is an experiment... hopefully it turns out and ends up in the build. I am also going to make some custom brackets for lighting and other fans. 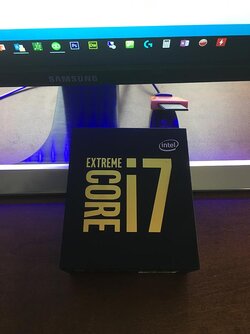 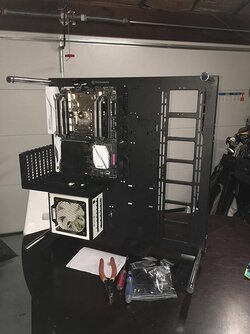 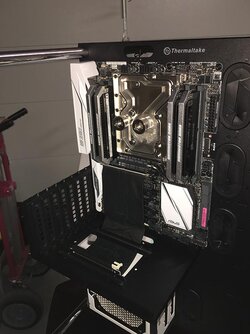 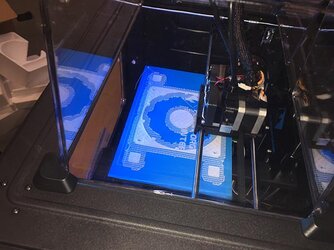 I think you should grab the 240, the 480 would probably handle the CPU/board and one of the 1080s, but that second one might be just a tiny bit too much for it.

I have one of these cases, very pretty.
you know the mounting plate on the back of the case?
remove it till you are done routing all the cables, yea, it's fun you get to route the cables and mount the motherboard a few times.
if you have issues using the Tt pcie riser cables, like I did, look into this thread>>>> http://www.overclockers.com/forums/showthread.php/772586-fun-with-pcie-riser-cables-and-sli!!!!!!
OP
A

caddi daddi said:
I have one of these cases, very pretty.
you know the mounting plate on the back of the case?
remove it till you are done routing all the cables, yea, it's fun you get to route the cables and mount the motherboard a few times.
if you have issues using the Tt pcie riser cables, like I did, look into this thread>>>> http://www.overclockers.com/forums/showthread.php/772586-fun-with-pcie-riser-cables-and-sli!!!!!!
Click to expand...

Hmmm... I was thinking about how I might have a problem like that when reading reviews on different pcie riser cables. Beside signal issues, I still need to work out how, or if, I use the other pci slots. X99 deluxe comes with a thunderbolt card that I would like to use. I may have to switch back to the cards direct to the board. I'm hoping to give it a shot. Thank for the info. It sounds like I am in for some good times trying to get this working...

Overall your list looks good. With such a high end system, I might have changed the fans to the White PWM version of the Gentletyphoons.

Other than that, should be a nice powerful rig.

on mine the other pcie slots are useless, the second card and the riser cables assure I'm plugging nothing else into them.
another pit fall is the third hdd mounting on the very end, in the back.
I run 3 4 tb hdds back there and had to find a tiny fan to get some air moving to the one on the end, and it still runs very hot.
OP
A

GTXJackBauer said:
Is the OS SSD a M.2 PCIe 3.0 or just a regular SATA drive?

Overall your list looks good. With such a high end system, I might have changed the fans to the White PWM version of the Gentletyphoons.

Other than that, should be a nice powerful rig.
Click to expand...

Thanks. I had the fans before I started planning this system. I am going to put some black and white 3D printed shrouds on them so they won't be very visible.

My OS drive is the PCIe 3.0 x4 version. I made that mistake of getting the SATA version the first time I bought an M.2 drive for my gaming rig. I didn't know then there was even different types. I do love not having to run cables and have the SSD right in the mobo. It is kind of silly the way Asus changed the M.2 slot on the new X99 Deluxe II to straight up and down. I haven't gotten to setting that up yet, but I have a felling it is going to look weird.
OP
A

Was able to get a little more done last night. Put the gpu waterblocks and SLI terminal, mounted the radiator and fans, and started setting up resevior. Found out that 16mm ek fittings don't fit on the frozenQ reservoir because they are too fat. Ordered a few extender fittings to bridge that gap and should have them today. Hoping to finish the build by the weekend. I hate having these two new 1080's sitting there waiting. 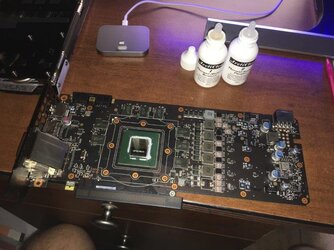 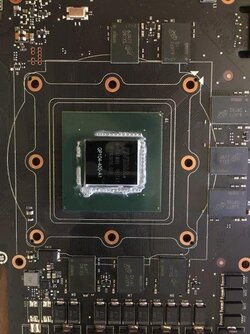 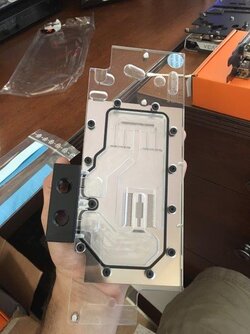 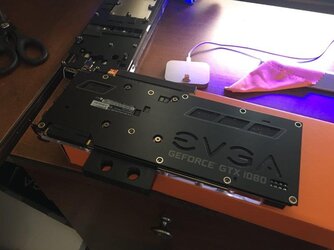 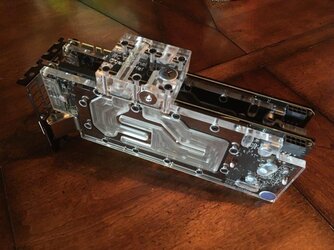 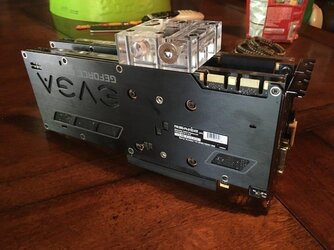 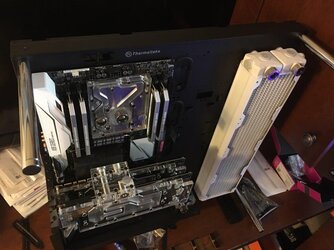 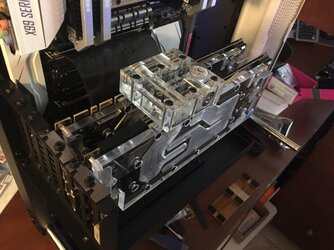 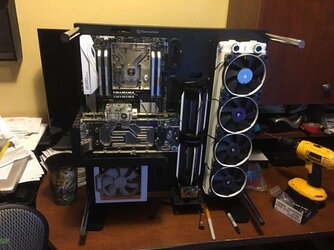 Geeze. I woulda cleaned up that old paste off the little bits around the GPU. That's just me. I see you smeared pasted all over the GPU install. You don't put a bit etc on the GPU and let it squish out? Just not what I have seen over the last 32 years of PC building.

Nice looking build for sure, nice pics! I'm sure it will be killer.

Subbed for this one!
OP
A

From the factory one of the two cards was flooded with paste and the other hardly had any. I guess evga doesn't have tight controls on the amount of thermal paste they use. It looked like a full freakin tube slopped on the gpu when I took the heat sink off. I did end up cleaning it all up with a q-tip before I installed the new blocks. It was kind of a pain getting it off the transistors around the edges. Not that it matters for much, besides me knowing it was cleaned. I won't be looking at the chip again for a while, hopefully...
OP
A

Hi, can you tell me your thoughts on if you think I will have issues with my pcie riser cable setup? I have managed to get the riser cables routed so that there is at least 2-3 inches between them. Were the problems you had because they were right on top of each other, or did you get problems with them just being anywhere close to each other? I am hoping that I don't have issues and it will suck if I have to make a change after I fill the loop. I would appreciate any thoughts you have on this setup. This is how I have it all routed right now: 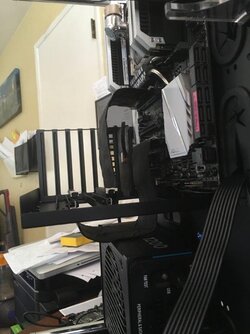 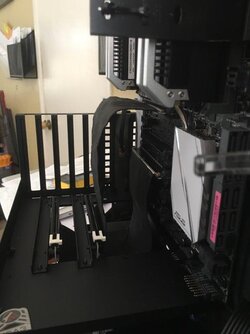 A few more pics from today. Wish I had more time to get his all done. Still have a lot of details to wrap up before filling the loop.

I am going to re-make a couple of my tube sections. I started off with 500mm pieces and that was not long enough for single sections. I have some 90 fittings between two smaller sections, but I think I am going to use the new longer PETG tubes and get rid of those fittings. I also am not happy with my bending of the twisty section going into the CPU. I learned a lot in the last day and should be able to make them much cleaner looking.

I changed the power supply from the Seasonic 1050W to a 1200 watt Corsair. I liked the Seasonic better for looks, but needed a little more juice for everything I have in this rig. I might print out a new psu bracket in white to make up for the darker color of this power supply. I also need to get some psu cable combs. 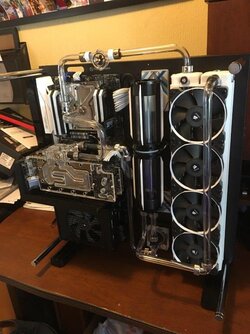 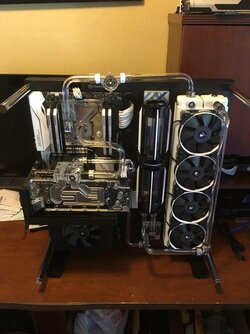 Was going to say the same Dlaw. Looks great though. That res looks amazing in this build.
D

When stressing the system I know that I am pulling more power than 750W. I know that because I put most of the parts for this new pc in one of my other machines with 750W psu and shut down the computer twice under full load. I agree that 1050W was probably enough, but I like the idea of keeping the total load closer to 50% where the psu is at peak efficiency. I had not bought the white Seasonic yet, the one in the pictures is an old 750W. I add also think the corsair link software is cool.

adenineX said:
I had not bought the white Seasonic yet, the one in the pictures is an old 750W. I add also think the corsair link software is cool.
Click to expand...

You're better off with the Seasonic. Number 1 in my book. 2nd comes in Corsair. Forget about the Corsair software. Its garbage and crap. It will just give you more problems. Played with Corsair Link for the first 2-3 years since its release and gave up after that with empty promises from Corsair. Its still the elephant in the room for them. Huge mistake to base all their products or at least their flagship with features from Corsair Link.

Regardless, I'm on a second AX1200i after the 1st one blew out my new X99, GTX 480, Corsair Link node. Everything has been taken care of since and the 2nd PSU is coming along just fine. I just don't use Corsair Link Software. I use another 3rd party hardware/software to monitor my system and a kill-a-watt meter to get my readings.
D

adenineX said:
When stressing the system I know that I am pulling more power than 750W. I know that because I put most of the parts for this new pc in one of my other machines with 750W psu and shut down the computer twice under full load. I agree that 1050W was probably enough, but I like the idea of keeping the total load closer to 50% where the psu is at peak efficiency. I had not bought the white Seasonic yet, the one in the pictures is an old 750W. I add also think the corsair link software is cool.
Click to expand...

Are you sure it wasn't a defective PSU? The reason I ask, is you may have a bad part that caused the machine to shut down, and if the PSU is older and not normally stressed like that, you might not know it's bad until pushed. I was just wondering if you investigated that further, and not just assumed it was because the wattage draw was to great.

Just to give you an idea, I made this list on PCPartPicker, where you can see that your wattage draw for the core system should be around 630w at stock, plus an overclock and the fans/waterpump/etc. So, a logical max is 750/800w all said and done. It may have been just barely too much to run on the 750w, but it's surely in that area. Or it could have been a defective part, but I'd make sure which it is before proceeding much further. It would be pretty crappy to have this awesome machine assembled and ready to start playing with, only to have to tear it back down and replace something.
You must log in or register to reply here.