My attempt to make a bing high amp LT1083 based voltage regulator.

I first attempted this 8 years ago when I created this post. The project stalled after my first trial with two regulators (me thinking one was bad) likely damaged. That is what happens when you jump head first into a realm of ignorance. I'm pretty sure I had the pins wrong, so I don't know if they survived. When I have a minute, I will test and see if they are dead.

8 years later, I'm ready to get these together. I've added some stuff to what I bought below (all still in bags) and have way better tools and supplies than I did with my first attempts. However, I still have more projects than time, so hopefully I can give these more attention than I have.

I've noticed that there have been some changes in the diagram from my original in 2010. I need to make sure I still have whats needed.

One disappointing aspect of all of this is the now prevalent source of non-LT 1083s lol. It looks like its cheaper to buy about a couple assembled rectified controllers based on reproduced 1083s for what I paid for 4 LT1083CP pieces salvaged from a Motorola radio. However, I do not need the bridge or the capacitance of those commonly available. I still need what bing's design provides and still intend to use it in the same application.

My goals are slightly different. Before, I was looking for a solution to start a 230CFM 12V Delta fan and run it at its minimum speed allowed. That fan was rated at 3A, but I never tested it. I might dig it out and play with it, but I do not really want to hear that fan again... Now I will be powering multiple lower amperage fans. With 7.5A to play with, I could get any number of fans ranging from 200mA ~ 1A in multiple arrays. I can also isolate each circuit, if I still have four good regulators. These are going in a custom rack cabinet that has a 12V common rail I use to power whatever, from a 20A 12V transformer I acquired years ago.

If I get froggy, a micro controller might be introduced to provide active monitoring and control.

The pictures I had hosted in this thread have vanished. I will look for them and re-post so some of the replies make more sense.
Last edited: Apr 13, 2018
OP

About those resistors, I see you're selecting 1 or 2 watt sized, if you haven't push the purchase button yet, you can choose smaller sized one like 1/4 watt since they don't carry big current in that circuit. That will be space saver when building the circuit.

For example, this pic of mine HERE at other fan controller thread, those two types above left are 1/4 and 1/2 watt sized resistor.

Personally, I envy you with those 4 of rare & expensive great regulator ICs, even used, with those heatsinks attached, they're ready for the circuit.

PS : I will definitely follow this thread closely, but since I'm busy lately, will try hard to post a respond to this thread if I had the chance.
Last edited: Jun 14, 2010
OP

Well that was the size resistor I could find that met the requriments.. The 8 different catagories of resisitors Mouser list is rather confusing.. They were also the cheapest, in that catagory(power resistors).
OP

Made my order today. Changed 1W resistors to 1/4W and ordered some other switches and LEDs I had in mind. Hopefully it will be here by Tuesday!

Anything that bing has his hand in turns out to be fun.

Only down side for me was it was a huge learning curve. And unfortunately Learning = Money. In the end I spent about 100 dollars to build a $20 dollar component.

If I was smart I would make about 10 more to get my money back.

Good luck, and if you haven't started yet. Look at the thread in my link (Homeade Fan Controller)

Edit: unless you have a really steady hand and are proficient in soldering, you may end up needing more than 1 of each component. A bread-board (proto-type board) is a really good thing to have when building this circuit.
OP

Brutal-Force said:
Anything that bing has his hand in turns out to be fun.

Only down side for me was it was a huge learning curve. And unfortunately Learning = Money. In the end I spent about 100 dollars to build a $20 dollar component.

If I was smart I would make about 10 more to get my money back.

Good luck, and if you haven't started yet. Look at the thread in my link (Homeade Fan Controller)

Edit: unless you have a really steady hand and are proficient in soldering, you may end up needing more than 1 of each component. A bread-board (proto-type board) is a really good thing to have when building this circuit.
Click to expand...

Thanks for the tips.. I've actually read your thread and the others that related to bing's design. You're right about bing, hes a great electrical engineer!

I've been soldering and building for many years, but if you notice I ordered 10 of everything, even though I only have four LTs(for now ). Even experenced people screw up somtimes

Since you guys have been so helpfull to me for the last ten years, I'm going to share what I've only shared with bing. My LTs came from a gentalmen in CA that is eBaying them for about 10-$20 for four, with the sinks. I paid $12 shipped for mine Heres a link to his eBay store:

I allready warned him that I was going to let the cat out of the bag.. Apparently hes salavaging them from some type of "equipment". I'm going to ask here in a minute what exactly his "equipment source" is.

Thanks guys for the nice words, actually I'm no EE, its just my hobby for quite sometimes now, and also luckily I got lots of EE friends around me.

Quadman, nice, can't wait to see the next steps.

Btw, thanks for that info too, grabbed 4 of them as well since they're quite cheap compared to new one. This high powered and low dropout linear based regulator is considered as a rare items nowdays, especially almost power supply is now switching type.
Linear power supply although not efficient, but when it comes to performance such as line regulation, reliability and noise, they're the best, swicther type just can't beat them in these categories.

Here are mine, still have 3 new unused two LT1083CP and the right one LT1083CK with TO3 casing style which is obsolete now, but still very good casing in dissipating the heat. From the date code it was made in 1994 week 43, quite old eh ?

Thanks for the eye candy bing!

All the goodies, laid out on some static paper a telecommunications buddie gave me a few years back.

The extras are: white 15 degree 15,000mcd 5mm LEDs with corresponding resistors, some switches for the case build we are doing(another thread, another day) and one of the military style "chop your finger off" switch covers. Mouser messed up and sent me and extra capacitor! Woo Hoo! Free $0.05!

After some thought, I think I'm going to do a literal build of bing's diagram. Just so people can see the layout of the diagram, physically. Since I have about 3000ft of this paper, I'm going to go a step further and draw the diagram, then lay the components out and simply run jumper wires/bend leads to follow. Maybe that will help out some of you guys that are scared of this project.

For the final product, I plan on using a pre printed PCB that the Shack sells. It has two common rails, and is about 2" x 2", so should work out great. Plus its actually cheaper at the Shack! I'll "steal" a picture of it later.

Great to hear all the components are arrived, eagerly to see your build !

PS : Suggesting you to resize the pic cause I think they're too large, prolly 1/2 or even 1/3 of like above one is still good enough.
OP

bing said:
Great to hear all the components are arrived, eagerly to see your build !

PS : Suggesting you to resize the pic cause I think they're too large, prolly 1/2 or even 1/3 of like above one is still good enough.
Click to expand...

Sorry about the pics; I thought the forum resized them? But I will ASAP

Quadman, after looking at the heatsinks, if your LT1083 is getting hot at your application, probably with longer bolt, using two of the heatsinks on single LT1083 is possible and to dissipate the heat better

Here mine arrived recently from Bob, paid $16, tad expensive since they're shipped across Pacific, at $4/piece even used, still considered cheap imo, these ICs are almost indestructible if used properly. 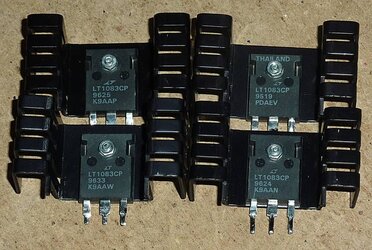 Nice! Bob keeps listing them, so they are not in short supply, whatever his source is.

I have some socket A sinks and some K6-2 sinks on the standby if these are not adequate(plus I have access to a drill press and tap sets). I haven't had the time to mess with it yet, so I'm not sure how those little guys are going to do. Thats why I asked your opinion. Hopefully this weekend, I'll get a prototype built

If all eles fails, I've got this guy kicking around since about 1998.. Never have been able to find a use for it; the PA-RISC it came off of was useless

You can see how its double fluted in this pic.

Even though its aluminum, I bet this wieghts over 700g, if not a kilo. It even has a support brace for the motherboard back plate that bolted to the case
Last edited: Jul 7, 2010
OP

Don't give up on me guys I went back to work full time, so now I'm piled up on everything. My buddy needs his done, so hopefully within the next couple of weeks, I'll get these guys rolling.
OP

I found this "project" hiding in all my crap, after having the need for speed rise again. Time to finish it....
You must log in or register to reply here.