Overclockers is supported by our readers. When you click a link to make a purchase, we may earn a commission. Learn More.
OP
1

Just placed the two two orders of parts and supplies

Newegg:
XFX RX480 8gb (refference model, I will install it in my current setup and be certain it works before ripping the air cooler off to install a waterblock)
HyperX Fury 16gb (2x8gb) (to match the current 2x8gb in place and fill up the slots on the motherboard)
CableMod extension kit in blue to color match the visible wires
5.25" - 3.5" adapter to mount a 3.5" fan controller and give a space to mount switches for lights, radio, and power button
120mm fan filters
SATA extension connectors (since I couldn't find a single SATA cable that would be long enough for how I want to route cables to hide them)
Misc mounting screws

eBay:
5.25" sized "front panel" that has card readers, headphone/mic jacks, and USB 2.0 and 3.0 ports
3.5" 4 knob fan speed controller
3 pin fan splitters to run multiple fans off one speed channel
3 pin fan extension cables
Blue braided SATA cables with 90 ends
8 dual ball bearing fans
USB 3.0 extension cable (to route back and up to front panel display)
Individual blue braided wires & misc header plugs/pins in a kit, to make my own motherboard leads for the audio, USB 2.0, and power button headers
Black carpet (same stuff used to wrap speaker boxes) to wrap the inside of the desk, hoping it'll give a clean uniform look; I'd rather cloth wrap it than paint it...

All that had been sitting in my shopping carts for a little while now in case I changed my mind on something, and all the choices seemed pretty solid so I went ahead and placed the orders. I'm still deciding on water cooling components, so I'll order all those when I make the final decisions!

So here's the current progress on the rough draft of the new setup. Same 48" width, but a deeper, gives me 12" of leg "scoot-up" room before it'll drop down and get thicker compared to the 8" the first design had. Completely removed the PSU from view. Not a big deal, not much to look at with that anyhow As mentioned, still playing with ideas on where to mount the pump, res, SSD, etc. 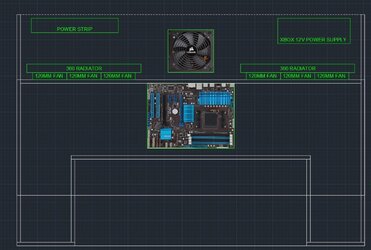 The glass is dead center. It'll go from full side to side being 48" wide, but being only 18" deep, it's going to have wood paneling in front of and behind it on the desk top.

The front section is where I will be putting the passive intake holes. Will most likely put ones the left and right sides facing forward, possible another two on the wall just in front of the mobo (knee area).

The back will be wide open in the rear to allow for maximum air flow and heat dissipation. Unless I add some sort of openings on the sides or bottom, I'll have to be sure to not back the desk fully against the wall or it'll restrict that heat escaping, but that's something I have yet to work out as well. I really don't want the heat exhaust to be straight up out of the desk top in the back...

And here's a little bit of nostalgia I stumbled on today. I work in a auto salvage yard and we get some strange things left in cars sometimes (they're all wrecked cars, people don't always completely empty their cars after an accident, so you can only imagine...). So someone found an old PC tower in the trunk of a car, and being known as the resident IT guy there, they bring it up to me... It's an old white box reminiscent of the 90's, didn't even see a brand name on it so it may have been custom built. I pop the side panel off and found a Radeon X800XL AGP card installed! Nothing else exciting inside, a whopping 512MB of RAM and an old AMD CPU (don't even remember what model, I didn't even bother keeping it lol. But I just found it interesting to find an AGP graphics card equipped PC at all. I remember putting off moving to PCI-E and struggling to keep up with my old P4 3.0 Northwood core socket 478 on an Asus board and trying to find the best AGP card I could to throw on it. Hell, the only reason I moved on from AGP is because I started overclocking that little P4, killed it by overvolting and if anyone is familiar with the Northwood cores and they're SNDS, then you know how that went... Replaced the P4 with another, dropped the voltage to be safe and started cranking FSB and ended up killing the mobo lol, then transitioned to a new AMD system, tried Intel again when the i7's released and built a rig around an i7 920, that MSI X99 board dropped 2 RAM slots out of the blue one day, and that's when I built the current AMD 8350 system.

Wow that turned into a history story... Anyhow, the main point of all that lol, the old AGP card I found 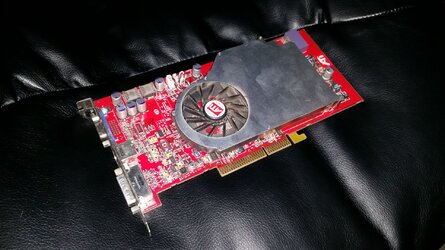 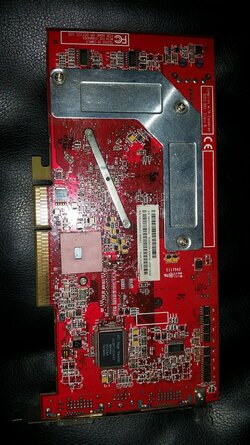 That current design looks to me like it won't pass much air over the board, more-so by it. Out of curiosity, why don't you want to mount the radiators on the sides of the desk? That would allow 3 fans for intake and 3 for exhaust, which would probably be more efficient.
OP
1

Well there's another computer desk (the wife's) that sits directly to the right, so that'll block that side's airflow. And I'm OCD to that rules out just putting anything on the left if I can't put anything on the right... That's also why I mentioned possibly putting two of the passive intake vents on the wall in front of the mobo in the knee area in the center, to allow some fresh air in right at the mobo to at least keep air coming in for the other chips on it.

I could even go as far as to put an 80mm dead center above the IO shield to push air in, at least to get air circulating inside the desk. My original design did have one back there to scavenge heat from the CPU air cooler

I agree with Dlaw. With the rads where they are and the openings at the front sides your dead spots will be in the middle. Right where the PC is. Even if you add intake fans, although it would reduce it.

I would suggest putting the intakes directly in front of the MoBo.
OP
1

Do you think it would benefit me the most to have all 4 intakes there directly in front of the mobo? More so than having two there and two out on the sides?

If I do move away from having the intakes on very front of the desk (to the left and right of where the knee area is I'm referring to), I could actually move the radio unit to one and then the fan controls and switches to the other side, which may actually be more convenient, bringing them further forward instead of having them up on top of the desk towards the back... Maybe less distracting too; the 7" screen of the radio and lights on the fan controller might become annoying when trying to focus on the screen between them lol

I would say that would depend on your layout. Water pump and HDD's can get pretty warm. You'll want airflow over everything if possible.
S

What if you made the desk airtight for your rads section, and maybe your mobo area? Submerge the board in mineral oil, with a water cooling system alongside it. The mineral oil would disperse the heat from the radiators, and would significantly lower the audio levels of any fans inside the oil used to circulate it?

It will make it rather heavy though...

It would look cool anyways.
OP
1


So here's the current layout.

3 intake vents along the front side of the knee area, two more on the left and right of the knee area. Originally was going to use a pump/res combo, but now I think I want to separate them to spread everything out a little inside.

Again, not all written in stone

I also think I'm going to move the the XBox 360 12v power supply to hang under the desk, as I plan to do some wire routing under the desk anyhow to keep things clean, so I could easily put it on a shelf under the rear most of the desk. 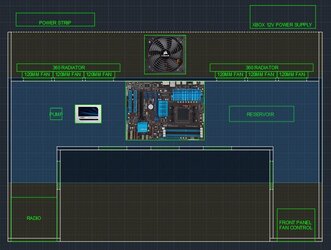 What's the leg layout going to be? If they don't interfere, one thing you could do is mount the radiators on the floor of the desk to the left and right of the components.
OP
1

Sort of like the build Linus did huh? lol, I thought of that as well sir, but then I'll need MORE fans; fans to pull heat from the radiators and then fans to pull air from the desk

If you have any experience with a 3D modeling software, it might help a lot of people here get a better sense of what you're planning for. It also gives a real space view of how much space is required to accomplish your design. If you don't have any experience, Sketchup is fairly easy to use when compared to other software.
D

The fans on one of the radiators would pull air from the desk. Since you want it to be basically sealed, if one side is intake and the other is exhaust, it would force the air to move across the desk.
OP
1

That is very true and a GREAT idea, although then my OCD would kick in while looking down thru the glass and seeing the front side (suction side) of the fans on one side of the desk and the back side (outlet side) on the other...
D

Could always put the fans under the radiators.
OP
1

That is also a good idea. I was doing it with the fans visible since it would be much easier to just hole saw openings for the fans. Do you think there would there be enough airflow over the radiators if I did just that, a few 120mm sized fan circular hole for air to pass to the radiator, or should I open it up to a more rectangular hole with a jigsaw for more radiator to show?
D

I think the circular holes would be fine, I've seen expensive cases with that kind of design and they don't have problems cooling.
OP
1

Ah that's good I may just do that. Wouldn't need the vent holes made on the front of the desk then. Great idea, thank you!
D

No problem.
You must log in or register to reply here.

T
What is the best fan controller software for PC?