Can Overclocking prevent PSU from working?

Hi
Have a strange sporadic power related issue after reinstalling a faulty water cooler. First a very brief background.
Had a total WC failure whereby a coolant hose came loose and drained entirely on to the base of my case and floor. My machine ran for several hours before shutting down by itself. AFAIK no coolant splashed on to my mobo (Asus X99 A-2)

After reinstalling the new WC replacement at first was getting no power even after testing my PSU by applying a 24 pin jumper. So assumed my PSU was at fault. Someone suggested I remove the CMOS battery. I did so, carefully wiping with a lint free cloth and a tiny bit of isopropyl alcohol. Replaced battery, switched my PSU on, and it worked again!

So now a few hours and several reboots later, even ran a stress test with RealBench, which it didn't quite pass, got a Windows blue screen after 10 minutes but I don't think that in itself indicates anything serious. I get a blue screen about once every 2 weeks on my Windows laptop!

So being more confident now I went into BIOS and used the Asus 'EzTuning' option to set a "Performance Mode" overclock.
Tried to reboot and..NOTHING.

What kind of freaks me out though is I was getting NO power to my mobo as well....no glowing LED's!

So again I removed power cord entirely, removed and reinserted the CMOS battery and I was able to get my PSU working again.
I assume doing so also resets all BIOS settings?

Anyways I am left confused as to why I am having these power issues.
Why would removing, replacing the CMOS battery have any impact on the PSU? Especially if my main 24pin power cord is disconnected from the mobo?

And should any sort of overclocking impact my PSU in this way?
Can anyone explain what is happening? This is my first build, only a few months old. 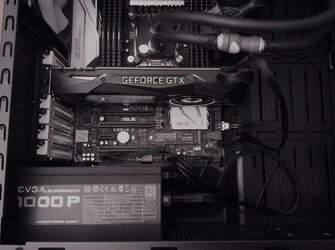 It's likely an issue with the Motherboard and not the PSU. I'm mobile at the moment so I can't elaborate yet. If no one else jumps in before I get home I can try and help a little more.
OP
E

Thanks. I need to diagnose to let the WC supplier know in order to be reimbursed for any damages. This happened again after just booting from a USB key. After I shut down, NOTHING. No power to my mobo. And removing, replacing the CMOS battery has no effect. This is driving me nuts. Is it possibly just that I need a new 3V Lithium CMOS battery? And if its more, what should my next steps be in order of priority?
Replacing my mobo and possibly my cpu will set me back over $2000!
Last edited: Feb 11, 2017

I suspect the motherboard.
lets putz with the psu a bit first please.

you know how to jumper the psu to turn it on so, lets disconnect the psu from the motherboard and plug one fan into it and run it a while say 30 minutes and see if it's ok.
please report back and do not plug it back into the motherboard.

while that's running, pull every thing out of the motherboard, gpu, cpu, memory, everything and take wifeys hair drier and see if we can dry out what may be an wayward water drop in all those slots and places.
when I spew water everywhere I put all the stuff outside in the sun for a few days and if the little woman is out in the oven at 125 f. for a while.
OP
E

Thanks for the feedback and the vote of confidence!!
I just pulled out ALL the power cords from the back of the PSU except for the 24 pin main mobo connections and attached the 24 pin jumper (see attached pics)
Previously I had not done this(pulled out all cords)

Made sure eco mode was off and switch on PSU. PSU is definitely working, I can hear and feel internal fan.

Reconnected everything and, feel like I am going crazy, everything works again as normal! Supplier probably thinks I am as well...'Yes it works' 'No it doesn't', 'Yes it does'

In your experience could this sporadic power issue be possibly due to a wayward drop of coolant getting into one of my power connections?

I am certainly NOT confident that all is well.

What would you suggest as further troubleshooting steps? I have already asked the supplier to recommend a qualified technician in my area to do a more thorough check...honestly can't spend another weekend troubleshooting a problem due to a component failure 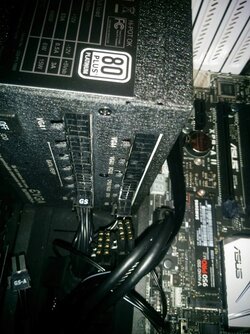 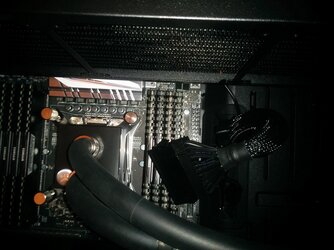 So.....how much coolant was actually laying in the bottom of the case where the PSU sits?
PSU is probably wet inside.

Mr.Scott said:
So.....how much coolant was actually laying in the bottom of the case where the PSU sits?
PSU is probably wet inside.
Click to expand...

Excellent idea! I'm surprised I didn't think of it myself.

that's why I wanted him to run it for half an hour or so to see if it would shutdown.
if you don't want to tear it all out and dry it, put it in a warm, dry room, take the case sides off and point a box fan at it over two or three days.
OP
E

caddi daddi said:
that's why I wanted him to run it for half an hour or so to see if it would shutdown.
if you don't want to tear it all out and dry it, put it in a warm, dry room, take the case sides off and point a box fan at it over two or three days.
Click to expand...

After removing ALL power cables from PSU and mobo, airing them out and reconnecting I seem to be ok once more.

Keeping fingers crossed. Most likely as suggested a few drops of coolant became lodged in either power connectors and or bottom of PSU (though that wasn't obvious when I first opened the case) causing my VERY frustrating power problems,

I suppose I can view this as a learning experience in preparation for my eventual WC upgrade.

Thanks for all the feedback!

You are welcome.
You must log in or register to reply here.

Display cuts randomly and PC crashes but stays powered on

First for me: PSU and Battery Back Up underpowered.
2