Can someone help me with my Windows 10 install?

So, I've been doing OS installs for well over a decade on a very wide range of systems, but this has me stumped. I did a fresh install of Windows 10 version 1511 on my sig rig right after it released, and made an array of images for it including a vanilla install image, two with only the drivers installed (one with and one without the GPU driver), one with all of my apps installed and so on. However, I'm having problems with a fresh install of version 1607 "Anniversary".

The first issue is that Nvidia control panel only shows me the options for Stereoscopic 3D. This confuses me, because I had all of the options literally 5 reboots ago. It even let me setup SLI (which was a pain, because for some reason the first 3 times I installed the driver it didn't want to let me SLI). Google only returned issues due to Optimus on laptops, which is clearly not the case in my situation. 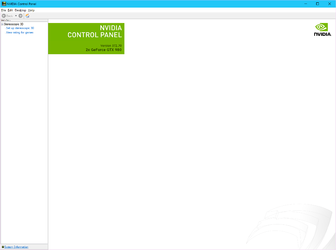 I suspect that my second issue ties into the first: I keep getting errors in a few games that my GPU and/or drivers are incompatible with the game for various reasons. For instance, I have a game called Move or Die that works perfectly well in 1511, but usually won't even launch in 1607, and hasn't worked yet on this particular install. I keep getting this error:

I've tried a fresh install numerous times, with 3 different flash drives using the media creation tool on 3 or 4 different computers. The only way I can have the 1607 update is if I have it install over 1511 it seems, and that leaves me with similar (though not as persistent) problems. I've been running the system at default for a couple of weeks trying to get this sorted out. The media was created at stock clocks, my drives all read healthy and I've tried every driver that I've ran thus far. I don't know what else to look at.

Well, it seems obvious that changes made by Microsoft in the Anniversary update have broken something with regard to the Nvidia driver or how Windows 10 interacts with the driver. This has resulted in some of the capabilities of the video cards not being recognized, ones you need to play that game. What happens if you take one card out and dispense with SLI temporarily as a troubleshooting measure?
OP
D

Physically taking the card out would be very difficult due to the SLI terminal bridge I used between my GPU waterblocks. I do need to do a 6 month flush on the system probably next weekend, though, so I might try that temporarily to see.

I suggested that because SLI and Crossfire can be problematic technologies.
OP
D

Well, I gave up on the fresh install again, and went back to an image I made of 1511 upgraded to 1607. I have full functionality in Nvidia Control Panel using the 368.22 drivers, and everything seems to work. I guess as long as there's no more shenanigans, this should be fine. I would rather it be a fresh install, but I'm tired of messing with it.

I'm pretty sure the hardware side of things is not the issue at this point, but I'll still pull the cards when I do my flush next weekend and replug everything. We'll see after that, I guess.

Those drivers are kind of old (released nearly 4 months ago). Perhaps that was part of it?
OP
D

Maybe the current drivers are borked for my cards? I don't know, but I don't have any games that need newer drivers, so these ones will work I think.

The funny part is I tried these drivers on a fresh install, and they acted the same as the current ones. I don't know.

As far as I can tell, the Anniversary "Update"'s only purpose was to lock more stuff down and break as many things as possible. M$ has made a career of breaking things lately, W7 Updater, and the list of things W10's Anniversary Mistake wrecks is breathtaking. While using W10 (temporarily) I set my connection to "metered", which has kept me free of a lot of problems.

So how does that work Alaric? Setting the connection to metered, I mean.

Start>Settings>Network & Internet>Advanced Options>Metered Connection to 'off'. It keeps large updates and involuntary downloads from M$ from happening. It is supposed to be for people who have data limits and/or data surcharges, but it comes in handy for anyone who wants more control over what does and doesn't get downloaded automatically. It keeps the Anniversary Update and subsequent new builds from being installed automatically without the need to turn off updates completely.
OP
D

Alaric said:
Start>Settings>Network & Internet>Advanced Options>Metered Connection to 'off'. It keeps large updates and involuntary downloads from M$ from happening. It is supposed to be for people who have data limits and/or data surcharges, but it comes in handy for anyone who wants more control over what does and doesn't get downloaded automatically. It keeps the Anniversary Update and subsequent new builds from being installed automatically without the need to turn off updates completely.
Click to expand...

Won't that keep the updates released after the AU from being installed as well, though?

I hadn't thought of that. Then again, that would be in the plus column for me. I did a recent reinstall and your question made me check installed updates, just to see what's what. Zero updates installed. Since I'm not keeping this install that isn't an issue for me, but apparently my settings do shut it all off.
OP
D

As of last night, all seemed well. I didn't have a chance to check everything out, but what I did check worked as it should. I do wish I could get a fresh install to take without issues, but that doesn't seem to want to happen. At least we can play our games and watch videos.

Another curious thing: for some reason Chrome has issues syncing audio and video on YouTube, and Vudu stutters. Neither happen in Edge, so maybe reinstalling it will fix the problem. I'll probably try that tonight.
You must log in or register to reply here.