Before I go on to describe the problem here's my PC setup:

Right, I recently purchased this cooler for my Q6600 g0 CPU:

The reason for this was because I felt it was time to extract the most out of my old CPU instead of lashing out on a new one. After several frustrating hours of trying to fit the humungous HSF in my case, I was delighted with the results it produced - reducing idle temps from 45C to ~25C.

Then, after a few days of research on forums etc, I decided it was time to give overclocking a bash. Before I go any further I must admit I have never overclocked any PC component in my life, so I am an utter n00b to this...

I downloaded Core Temp, CPU-Z and Prime95 as the benchmarking tools for the overclock, then off I went to BIOS to start fiddling around.
After hours of messing about with FSB frequencies and multiplier numbers I finally got the old Q6600 up to 3.01 Ghz at a very reasonable 36C on idle and 50C under load (7x multiplier, 430mhz fsb).

I started noticing that Windows just didn't feel right. Little things here and there didn't act like they did before the overclock. Even when running 3DMark when the sample game section played, the video was stuttering every second or two. Also when maximising and minimizing Windows, they were oddly "laggy". Wasn't smooth at all. Same thing happened when pressing the little "+" icon in Mozilla Firefox to create a new tab - the new tab that slid out onto the toolbar did it's movement in a very juddery manner. Same thing when I closed a tab, or even closed a window. That was the first time I noticed the system clearly wasn't stable (duh). Also the mouse cursor at times lagged when these things took place.

Is there something I'm missing here guys? Seriously I'm extremely let down at my first experience with overclocking. After reading around forums I expected to be able to get to the 3.2ghz marker before the system started losing stability. But even now I have it set at 2.8ghz (7x multiplier, 400mhz FSB) and it's still not entirely stable in the ways I've described above (not half as bad but still slightly noticable here and there). I thought at first all the things I described above were caused by the beta nvidia graphics drivers for Battlefield 3. I discovered they weren't after I reverted back to the stable release drivers and the problems still took place.

The problems went away instantly after I reverted back to the stock 2.4ghz clock by resetting my BIOS. Which proves it is indeed the overclock that has caused the problems. Is it due to the multiplier being lowered that has caused these issues? Or even the increase in FSB? Also I have tried changing the PCI-E frequency in BIOS to AUTO and 100mhz, both of which made no difference.

Is there anything I can do?

Any help would be HUGELY appreciated!

You should have left images full size and uploaded to the forum as they would then be viewable in full size by clicking at the "resized image" statement.

It also looks like the ram timings are too tight for the ram running at DDR960 true working ram speed.
OP
M

RGone said:
You should have left images full size and uploaded to the forum as they would then be viewable in full size by clicking at the "resized image" statement.

It also looks like the ram timings are too tight for the ram running at DDR960 true working ram speed.
Click to expand...

Thanks for the reply, but what do you mean by the ram timings are too tight? What do I need to do to sort this?

Sorry for sounding like a complete n00b but I have absolutely no idea what any of that means lol. I've been googling "RAM timings with cpu overclock" but found nothing that helps me understand what to do in BIOS or anything. Any links or tips you can give me? 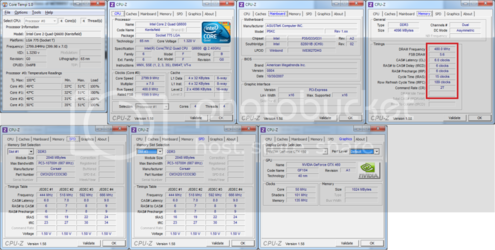 Your ram timings are highlighted in red, and the 6-6-6-15 that they are set at could very well be too "tight". Now you should try to "loosen" the timings in your bios setting them to something like 7-7-7-20, 8-8-8-15.... You'll have to play around with it. But in the bios it should be labeled as DRAM Timings or something similar. Your ram timing will also depend on what they come stock, there should be a label on the ram that tells their rating which will their speed and default timings on them. Check that label and then set the timings to that if they are already not there
OP
M

Is there a guide somewhere that you could link me to so I can play about with the ram timings? I have no idea what I'm doing and don't want to risk damaging my ram in some way?
R

Problem that jumps out, is that the FSB-to-RAM ratio isn't at 1:1.

Some 775 systems may not be possible to get stable at anything other than 1:1.

But, the slowness is more likely the PCI-E. Please set the PCI-E clock manually to 100 Mhz.

Lots of overclocking guides at the first of the forums
R

Your board appears to be older than mine!
Sorry, I don't believe DDR3 is even supported.

/facepalm
Last edited: Oct 3, 2011
You must log in or register to reply here.

Bluetooth headset, Mic or Sound works but not at the same time