Got Asus Maximus VIII Impact MiniITX, but the manual does not explain clearly what's the plus pins on the front panel connectors row. The illustration of the pins is kind of like this:

And my Cooler Master Elite 110 has an arrow on each plug, with a + and - for PLED. Read that "PIN 1" on the illustration above stands for plus, but where exactly on this row should I put the plus (arrow) pins?

This is my first build, and the fan of the PSU will not even start, there is just one blink of a blue light at the front panel, and the start button and the jack connections for mic and headset are lit up, but nothing happens, no sound, even though I have installed the system speaker which should beep to indicate what's wrong. Hope it's only the plus pins above that have been misplaced, and not that I have fried components with static or broken anything when pressing relatively hard to connect them.

Are you using the front panel connector included with the motherboard?
OP
A

No, the manual didn't mention that... But found the connector now. Will take a look at it. The manual is not exactly noob friendly

But is it normal that not even the PSU fan starts if some of these pins are wrong?

Yeah the ASUS Q connector should be in the mobo box. Will make that easier
If you don't have the power eset correct then yes
OP
A

Ok, good to hear, crossing my fingers that I didn't break expensive components, that only the pins are not placed correctly. Trying to be very Zen now

As for the Power SW and Reset SW, they don't have a polarity.

Just found a pic of MB: 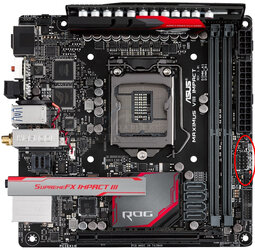 Turned on power, the psu fan stopped after 1.5 seconds and the whole system made a strange continous deep noise, like "rrrrrrrhhhhhmmmm", never heard that from a computer before. From the H80i water cooler perhaps?

Got no beeps from the case/system speaker. Can't see any LED lights because the mITX is so small that almost the whole mobo is covered, by the radiator for instance. Could see that the pump unit of the 80hi was lit up.

What PSU is it?
OP
A

Had to bend the psu cables like in a hairpin u-turn a few times to make them fit inside the mITX. Did that cause damage?

The pins of my cpu socket and the 6700k seems fine, but noticed that the pre-applied thermal paste on the H80i had not covered the whole cpu, and it was not even. Thought I had really thightened the pump unit, but perhaps not? Anyway, is the 6700k damaged by getting 3 faulty start-ups with this strange mechanical almost "wrench wrecking" rrrrrrhhhhhmmmm noise?

The PSU has "Zero RPM Fan Mode" so it shutting off the fan under low load is normal.
If you plugged the cables in where they are labeled then they are in the correct spots.
It's highly unlikely you damaged the cables or the CPU.

Did you clean and then reapply thermal paste when you unmounted the AIO?
The radiator is positioned above the CPU block, correct?

Where is the cable going to the monitor plugged in?
OP
A

The whole mITX is new, so just followed the H80i manual and put the pump unit over the cpu, with the radiator above the cpu block, but noticed that each standoff screw of the backplate of the H80i is like 1-3 mm "lose" in a way. Each standoff is screwed thight but still I can pull/push each standoff straight up and down 1-3 mm, like the backplate, on the other side of the mobo, is "lose" vertically (straight up and down 1-3 mm). Is it supposed to be like that?

HDMI monitor cable is plugged to the GPU card.

Have spent 3 days on learning from scratch how to build this $3000 mITX, trying to be as careful as possible, but the case is really small and the Asus Impact VIII does not fit well with it, because the radiator and its fan covers most of the connectors, so have made some mistakes:

Like accidentally touching the RAM with a screwdriver, touching the backside of the GPU with my hand and the screwdriver, losing screws down on the mobo, the cpu fell out of the Asus installation tool and dropped 2-3 cm down on the socket, and when using the lever to fasten the cpu tightly to the mobo, the lever made this cracking noise halfway, even though the arrow of the cpu was correctly alligned and the plastic cover over the cpu socket had been removed. Now the mobo is resting a bit unalligned on the standoffs after I unscrewed it to check why the cooler backplate seems lose, so wonder if some pins underneath the mobo got bent when resting this way...

Took the whole system apart. RAM was a half mm unplugged on one side. Fixed the "lose" backplate. CPU pins seems fine. Now the Asus logo was shown on the monitor, but no fans were running, and I heard one beep. Turned off the pc before reading the error message on the monitor screen, in fear of frying the CPU. So got one step further, with at least an error message on the screen, and the sound from the machine was a little more benign now, but no side fans, no front fan, and no psu fan.

Got two 80 mm Noctua NH-A8 connected to a splitter attached to one cha-fan header, since the mini Impact mobo has only two fan connections (in addition to an external fan card I have not used). Are two 80 mm fans too much for one fan connection on the mobo?

Have you tried without the splitter?
OP
A

The splitter is under the radiator, so got to take out psu and radiator to get to it, and then install the external fan card. But will do that if it's a likely cause. Is it safe to let the system run without fans until I can read the error message on the monitor screen?
OP
A

Ok, now got the cooler fans running and the two 80 mm fans going, but no psu fan, hmm. And got the Asus logo up on the monitor screen. But how to fix psu fan?

Ah, just read that the SF600 has a fanless mode, so guess it will not start until it's needed, right?

Again, as I stated, the PSU fan has a "Zero RPM Fan Mode" meaning it will shut off the fan in low load situations.

Edit: Saw your post update after I was typing.
OP
A

Updating Windows 10 now on the new mITX, so thanks for help and advice the last days!

Glad to hear it!

Good job, the next one will be a lot easier now that have one under your belt

Now I just have to solve "Nvidia installer failed", which appears before the options to install the 1070 drivers, a message I have never seen the last 10 years, hmmm. Will at least learn even more about computers by troubleshooting it. And really comforting to know that you friendly folks are out there

J
On board audio and front panel won't work