Either is not too high on my system, I haven't installed any fans yet, but I will next week. My friend is trying to convince me to add case padding for noise reduction in my case, the noise level isn't too bad, but I'd propaebly sleep better with less noise from my computer.
So if I do decide to add case padding how will this affect the heat? Will there be a big rise? My friend told me that I need to have both intake and output fan in my case if I wan't to use that noise reduction method.
I really don't know whitch way to swing..

err..
the pad are somewhat insulating.. but you case shouldn't be absorbing heat anyways! so basicly it shouldn't affect anything.
case padding is good for vibrations mostly.. eliminating noises caused by vibrations.
really depends on the fans you use (low rpm vs high rpm)
i would recommend putting two output fans and one intake
for best air flow, or just one output if thats all u have.
a lot of people think putting cool air into ur case is better, but what about the hot air on top where ur cpu is? thats the most important and sensitive part of ur computer, so having an exhaust fan next to ur cpu (which MANY computer manfac. like dell, compaq, hp, ect do) is a smart idea.
OP

I have aopen HQ45 pro -case. It's supposed to have two fan spots on front and one back, but I can't find one on the front for the death of me. I think they are just lying about the front fan spot.

uh.. right there?
unless u lost the plastic holder..
OP

I don't think I ever got a plastic holder with mine. I got the case from some village shop in finland for an outrageous overprice, but the seller did say it has two fan spots. That lieing thieving roaring b****rd.

thats to bad..
if you're a handyman, u can drill holes for ur fan and screw'em in the place where they should be.
if not, you can consider getting a slot fan 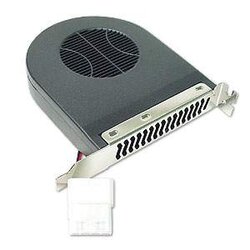 I'm not exactly a handy man, but my friend is.. sort of. I guess I could ask him to make a fitting hole to the side panel make that input and the on on the back output. Would this work?

yea that would be fine.
make sure u keep in mind that hot air goes up
put the back output high and the intake low basicly
good luck
OP

Thanks a lot for all your help. I don't know when will I actually get around to making a place for that intake fan, because i wan't to paint my case first and I don't have a good place where to paint it.
But no worries, this is by no means a very high priority right now, my heat levels are not that high anyway.

glad i could help
i hope it works out
BTW, paint it after u cut up/drill ur case, it'll look better that way
OP

Ok, thanks! I thought you should cut after, but that does make sence. I wonder if it's the same when installing a window, might not be so easy to paint a case if you already have a window on the side. =)

yea, kinda hard
cut the hole for the window, then paint it, then mount the window
lol
OP

sounds pretty tough, I'm glad I'm not planning to put a window in.. yet. maybe in a future rig, not this one.

i don't know about finland, but where i live, a windowed, colored cases with mounting spaces come pretty cheap.. $30-50 bucks for the regular ones, 100 bucks if u want something fancy.
ever consider buying a new case with all the work already done in it?
OP

Where's the fun in that? J/K

Yeah I have thought about it, but the cases are a bit more expensive here than that.. For example:

ofcourse there are some cheaper models too with the window and all but it's still over 100 € at least!

That aopen case I got, i needed it really fast so that's why I got it at the village shop for 90 € 'bout two years ago.

This is not a too cheap country.

*does a currency convertion*
wow.. thats pretty expensive..
local stores usually rip u off..
my case which i got a year ago for 100 bucks with shipping from ebay was for 250 at a local computer store, same box, same everything.
try looking online?
i think theres a ebay for finland..
OP

yeah, there is a sort of finnish net auction. I don't know about ebay but it's something.
Same case with a cooler front panel I was bidding for got sold at 53 €'s for someone else, I guess they just wanted it more.
It would be great to get a new case, then I could freely destro.. um mod my current case with no worries.

LOL!
in that case, u won't need a drill, a axe would work just fine
OP

Hmm.. sounds interesting, I bet my roommate has an axe. He's a homicidal maniac, y'know.. j/k

I'd really like to try and do something with my case, but I haven't modded anything in my life and it's going to be my first paint job aswell, just when I figure out a place where to paint it.

This thread may be of some interest to you.Check it out for some
ideas on your case. THE FANMAN

THREAD LINK
You must log in or register to reply here.