I'm kind of new to case flow. In the past I just ran open case. But I'm already seeing somewhat of a benefit from caseflow on my new build, mostly in terms of stabilizing overall internal case temps, and on some things like motherboard chips, SSD, RAM, very good temp improvements. SSD being the most important out of that set of course. What I'm hoping to do, if someone with more expertise in the matter may assist, is to allow my video card to also benefit from case flow, if possible.

So I finally slapped my old GTX 1060 3GB into my new build. The new build is thermally excellent now even when pumping 230 watts through the CPU. The caseflow keeps it from turning into an oven. All the temps would be dandy. However, I'm finding that when maxing out the GPU around 113 watts or so, the only way to keep it at a "reasonable" sub 80 degree temperature is to run its fans at or near maximum, which I'd prefer not to do, since they both get rather noisy (enough to overpower my undervolted Deltas lol) and because it's probably doing a number on the bearings. On the other hand, the slower they run, the hotter the card gets, which may or may not be equally bad for the bearings. I'd prefer those stock fans to last as long as possible so I don't have to rip it apart and implement a new cooling solution anytime soon.

Even with case flow as it is now, the hot spot of the GPU can sit around 90 degrees, and that's with my room temp "only" being 78.5 (it will get to 83 possibly maximum in the summer) AND only running less than 40 watts through the CPU. If I'm maxing out the GPU in a game AND multitasking, that radiator intake will be bringing in warmer air. The caseflow as it stands right now, does a great job of preventing the air inside from warming up much. However, it didn't have the wind-tunnel effect on the GPU I was hoping for. At best, compared to the side panel off, it maybe shaves off 0.8 degrees.

Here is a diagram showing off my amazing paintbrush skillz0rz. Note: RPMS are not maximum, they are what the fans are running at. 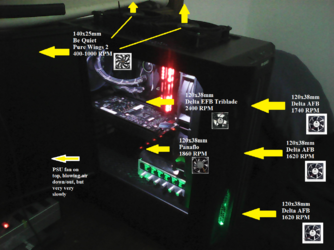 This next picture shows additional annotations with some comments/ideas. I happen to have two nice 80x38mm deltas of different models from an old build I never use anymore. 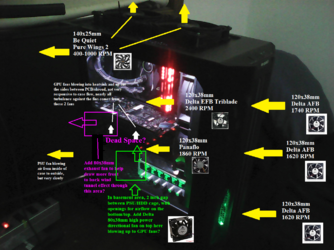 Essentially I believe that the dead space under the video card is receiving virtually zero front-to-back wind-tunnel effect, as most of the airflow is both being drawn up, and mostly already blowing up over the top of the card anyway. The problem is, the style of cooling on this video card has one of its fans blowing up against the airflow of the panaflo pull fan in the middle, which means only a little bit of its airflow is going under the card. There is intake from the bottom front fan, but it will be hampered/heated up by a hard drive cage that hardly breathes + 2 hard drives. What I propose to do is use a high power undervolted 80x38mm delta where this fan controller is right now, on top of the 2 inch gap between the PSU/HDD cage (with airflow holes on the bottom of the case underneath that gap area as well) to draw air from under the case and blow it directly into the fans of the GPU from below.

This should also bring more air pressure into the area below the video card, and some cooler air from under the case hopefully.

Unfortunately, the cooling design of the video card doesn't seem to be highly compatible with front-to-back wind tunneling in terms of gaining much benefit, aside from avoiding becoming an oven. If anything, I think a bottom to top wind tunnel would be optimal for it, which I can achieve at least partially. However, I believe with a combination of both a little bit of bottom to top direct airflow from the directional high power 80x38mm delta, and a stronger front/back wind tunnel effect by adding the exhaust underneath the card as well, perhaps I might be able to shave off at least a couple degrees if not more. Also, even if I can't lower the temps much, sometimes, these cooling enhancements prevent temps from creeping up even several degrees higher, which in itself is priceless.

I have no idea why you need more airflow in that case with all those deltas already.... not to mention, what would you get out of it? More noise and your GPU runs a couple degrees cooler? I mean there's literally nothing tangible (to me) about adding more fans for this former mid-range card. Anyhoo, I'd try just one of those on the rear if you have space so that more of the fresh air from the front goes into that area below the GPU.

Is your PSU upside down? So it's actually taking in 'fresh' air from the case? I typically run mine with the fan down so it takes cool air in from the outside (bottom) and still exhausts warmed air outside of the case.
OP

So basically with just 1 exhaust in the back, that case was frying if running prime95 for a long time. The 2 on top massively stabilized things. I set the 140's to run super slow unless the CPU temp ramps up a lot. Oddly the deltas aren't enough to actually drive air through the case fast enough to deal with 230 watts of radiator heat

But I run them at limited RPM, and they do have quite a bit of resistance to deal with (fortunately the radiator IS recessed almost 4 mm from where they screw in, so that helps a LOT).

So you're generally correct. The case flow is already great... FOR EVERYTHING ELSE. But for the video card.... meh... I feel like it's suffering from dead zone syndrome. And btw, this former mid range card and cards like it are going for way too much on the market right now. My new CPU can easily saturate it, and when it's saturated, it get HOOTTTT.

DO RECALL... the temps I'm experiencing now, are NOTHING like what I could be experiencing when the humidity goes up, my room heats up, and a couple months of dust settle into the case. I'm not the "do a total dust-down and detail clean every time I see 3 specs of dust" like Jayz2centz is. I run these systems HARD and put them away wet ^_^ Or humid and dusty I should say. That's why I ALWAYS like to overprovision on everything power/heat related. My former systems lasted YEARS without dusting because of my approach, in high heat/humidity. Now, these days, it's easier for me to dust more often, but I just forget sometimes. I tend to be 1-tracked in my activities. When I'm not actively doing builds, I tend to forget my computer even exist and just use it, focusing 100% on other crap instead. Last thing I want is to HAVE TO think about it.

If you search my OCF history you'll notice multi-year gaps between my activity. Yep. Computer stuff often just drops from my mind. I wish it didn't have to, but unfortunately I'm too preoccupied with the bullshit necessary to avoid diving head first into the gutter, just like so many others are! I'm just not good at juggling!

About the PSU, yes I'm running it upside down. I honestly did it for the looks. I like seeing the fan, even though it's a bit obfuscated by the basement grill. I'm tempted to just cut the basement roof around the PSU so I can see it in all its glory. I also tend to think the PSU helping exhaust from that dead zone might help. On the other hand, maybe it's fighting against the GPU fan that's closest to the rear for air? I have no idea. I certainly like the idea of the PSU taking in cooler air, and I believe that would also make it run more efficiently. If it's not helping with my caseflow ambitions, then I might consider flipping it upside down, or right side up as it were. I'm a caseflow n00bz0r.

You're already over provisioned.

Im sure you can measure it running more efficiently a couple C cooler, but otherwise....... I just do it for safety... so nothing falls inside (that happened once).

But yeah... there's no need... even when the temps go up and the card is 'saturated' by your CPU.

But since you insist, try a single one on the rear below the GPU and see how that helps. Otherwise, I'd just leave it alone with all you've got.

What I noticed is you have more air intake than what you have as exhaust. You have positive air pressure, thus is why your case is "frying". All the hot air is trapped meaning you don't have enough exhaust. Those delta fans are pulling air in faster than the bequiet fans can push out.

You need negative air pressure to remove the hot air out of the case. If you can, replace the bequiet fans for others than can keep up with the deltas CFM wise.

Another thing to note is you won't be running P95 for 24/7 use, so of course your case will overheat.
OP

The case doesn't overheat anymore with prime 95. It only did that with 1 exhaust fan. With all 3, it can't even heat up anymore. Instead, my room does LOL

I could pump 230 watts through that radiator all week long and that case would not become an oven unless my room temp went up 20-30 degrees. I already solved that problem as soon as it came up.

Max0r said:
It's just this one feels like it could be less obvious and I might be doing counterproductive things in my proposed strategy
Click to expand...

I mean, there's little point, IMO, to do so in the first place. You'll literally gain nothing but noise and perhaps a gpu that may run a couple of C cooler.

That said, it's adding a fan. Four screws. You aren't replacing a water loop... so give it a try!

I used to run a setup like that with my Meshify C. I had 5x 120x38s. Now I have sealed the top and the basement off, and am just running 3 front intakes, no exhaust.. works great.
You must log in or register to reply here.

One side of the fan is covered