Mushkin has been busy this year putting together a new line of solid state drives and high-end DDR4 memory kits. That's not all, they have plans to launch M.2 and PCIe storage devices in the next few months to really round out their family of products.

Looking forward to that Scorpion XC, that's a killer $/GB for PCIe!

I wonder if the M.2 cards support PCIe. From The Book of Knowledge I read

The M.2 specification provides four PCI Express lanes and one SATA 3.0 (6 Gbit/s) port, exposed through the same connector, allowing use of both PCI Express and SATA storage devices in form of M.2 cards
Click to expand...

but I didn't read on to see if that is required or just possible.

The reason I ask is that I recently bought a half TB SSD and was astounded by the size: 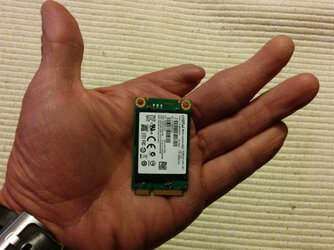 My first thought was that this has to be the way of the future for laptops (and servers?) where space is at a premium. However if PCIe cards are available in a similar form factor and price, they might fill that niche.

i don't need blazing speed from a single drive. Give me a RAID and some nice slow-ish enterprise SSDs with their 1 data error in 10^17 bit reads.

That said, I recently purchased a mSATA M550, for my laptop (my desktop gets the good, albeit slow, stuff), and when I saw how small the thing was, and though just how fast and large the storage was, my mind was blown. I know many people here are older than I am, but I build my first computer about 13 years ago and my first hard drives were a quad of 80GB PATA HDDs. Those four drives in a RAID0 (because I was young and stupid) might have had a top speed of 200MBps -- MAYBE -- and they held about as much data as the tiny thing in my palm.
You must log in or register to reply here.