I know I read somewhere that there will be some water loss in a loop, even closed loops due to there not being a perfect seal and vapor will be lost over time, or something like that, but what is an acceptable amount? I did a major overhaul of the loop in my sig cause I got a hair... (you get the idea) and decided to put a 3rd gpu in this loop. Well I noticed as the ambient has increased so it's harder to keep my water temps where they were with only two cards, and this has increased the amount of water loss in the system. Now its not much, and if I've done the math correctly (always a fear I have, since I paid so much attention in school) I believe I've lost 0.0848 liters (or 2.8682 ounces) over the past 2 months-ish. This might not sound like much, but here's where the question comes into play, how much water loss is acceptable? Now I might not have lost this much, cause there was undoubtedly some air still trapped in the rads maybe even the blocks that worked it's way out over time, but water loos in a closed system is still inevitable.

This is where it started just about 2 1/2 months ago: 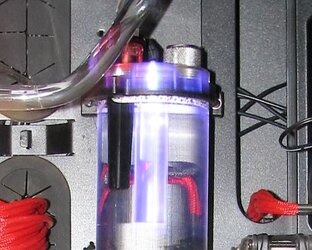 A recent pic, horrible detail, this phone sucks, but you get the gist. 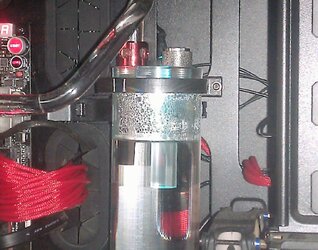 Just food for thought. I mean granted at worst I'm losing 0.00113 liters (or 0.03824 ounces) a day (I find hard to believe) in a loop that hold just under 1 gallon, so theoretically I could run the system for a long time before there was any damage to the components. I mean there is no sign of water leakage, so it's not a leak, but at those numbers even if it were a leak it would probably evaporate before it touched anything important. I would hazard to guess most of the volume drop in my res I noticed was due to air being trapped in the loop and finally making it's way out Since temps have increased here in Texas and thus increased water temps it's a concern that water evaporation is a possibility more than it is in the winter time when it's much easier to keep things cool.
B

You probably had a bubble in your loop somewhere that found its way out.
OP

I wasn't asking for my case, the pictures was just for reference purposes. I was asking this cause it might be helpful to others to give them an idea of what to look for. I've read about people who didn't notice they had a leak, and when they did it did damage, had they kept an eye on the res level their system bight of been saved, of course flow meters and temps sensors in your water also help, imo. But for the purpose of my query, what is an acceptable loss of water in your loop (and none is not possible).

When I first put my loop together and filled it, I placed a piece of tape on the res and marked the water level, after 3 weeks it dropped significantly, this I know was from air being released from it's prison somewhere else in the loop. After roughly another 2 months it dropped some, not as much as it had originally, which after watching some air bubbles go into the res I attributed it to more air in the loop being released.so when you first put a loop together there will be (what appears to be water loss) a changing of the level of water in your res, but after a certain amount time nearly all the air should be in the res and none should remain in the loop anywhere (this is theoretical of course). After said time, how much is accepted as water vapor escaping the system and how much does it need to be before you should find the leak?

You can tell water vapor exists in a lop, just loop at the top of the res above the waterline. Would be nice if it didn't escape and it all stayed in the loop, but we don't live in a perfect world, well I don't at least.

there will always be some small loss out of the system.
the level will fall over time due to air that works it's way out over time.
and what nobody accounts for is that stuff expands and contracts as it heats and cools.
if you don't see it dripping or spots inside the rig, it just might be normal........

Type of tubing has something to do with amount of evaporation also. I normally use Tygon 3603.
I lose about an ounce a month. I consider that normal for me. Been that way for a decade on many different systems.
OP

Mr.Scott said:
Type of tubing has something to do with amount of evaporation also. I normally use Tygon 3603.
I lose about an ounce a month. I consider that normal for me. Been that way for a decade on many different systems.
Click to expand...

Thank you Mr. Scott, this is what I was going for. Some sort of indication of what is normal, I would of thought an ounce to be on the high side, but that sounds about right, from the testing I have been doing. I was just looking for other peoples input on the subject of water loss in cooling loops. I sometimes don't ask things the right way.

As for the tubing, I noticed when I used soft tubing there was a lot of changing in the water level and my pumps speed up or slow down due to their ability to expand much more than the hardline tubing I have now, which still allows for some change in the water level as the pump speeds up or down, but not nearly as much. The soft tubing got worried a lil for how much it expanded when the pumps were at full power, but they were secured pretty well so it was more concern of the tubing bursting, but that might only happen under rare circumstances if at all possible with the pressures you normally deal with in a custom loop. That's another discussion if it's worth having, lol.

It is possible to have a line burst, but usually that's because of defective tubing. I've sprung pin hole leaks before from defective tubing, even Tygon. On inspection, you could actually see where the wall was thinned right out to nothing.
OP

Mr.Scott said:
It is possible to have a line burst, but usually that's because of defective tubing. I've sprung pin hole leaks before from defective tubing, even Tygon. On inspection, you could actually see where the wall was thinned right out to nothing.
Click to expand...

Really, I would of thought the production was well enough done that there wouldn't be issues like that, but I guess anything can happen. I'd never of thought a line could burst, the pressures we deal with (I'm guessing here) are so low that it would be impossible, other than a system getting clogged to the point where flow was so low and it heated the water to extreme temps it made the tubing fail, but that's where flow meters are useful.

Again thank you for your insight to my original question, you also again proved why it's important to inspect everything before you install it, run the loop without power to your components and do a thorough leak test. There can be nothing worse than skipping these important steps and finding out you ruined your equipment, other than throwing the winning lottery tickets away.

Looks normal to me. I actually had to fill my reservoir up a few months ago. I suspect its the bubbles that accumulated in the reservoir and I'm sure the loss of water which comes with in its territory but no leaks here. I do monthly checks inside the case and run my fingers on every point to feel any dampness.

Remember, our tight seals are tight enough but not sealed tight like a NASA chamber.

I agree on the added water temp sensor and flow meters, they play a great roll. It helped me identify my loops deterioration which ended up being a clog inside the CPU block channels. (It was leftover tubing when I was cutting away. That little devil slipped in there somehow.

)
You must log in or register to reply here.

How to clean your loop without taking it apart?