I just built a computer for my girlfriend. It has an i5 2500, GTX 660, single stick 8gb hyperx fury 1600mhz, 600w psu Thermaltake PurePower 600NP (more on this later), a d link wifi card, 120gb ssd, 500gb hdd, and an optical drive. It is currently in some sort of boot loop. Lights and fans turn on, turn off, lights and fans turn on, turn off, endlessly. No image on the display either. Too keep the details short, she is 830 miles away so me attempting to repair it is not exactly easy and wouldnt be able to happen for at least 2.5 months.

When I had the computer, it was working perfectly fine. I ran some benchmarks and overclocked the GPU modestly making sure everything ran fine still. So now leads to what I think the problem could be. I already had her remove the CMOS battery and short out the Clear CMOS pins to no avail. This was enough of a job for her so...

With the power supply, that is the oldest thing in the system. It has two 6 pin pcie power connectors which only one of them are currently being used to power the gpu. The only place I see that I could have done anything wrong is that I used a 4 to 8 pin CPU power connector adapter. I was told that this could put more stress on the power supply, but since it was a 600W and this system couldn't have been pulling more than 450W at max, I didnt see it as being a problem.

What would you guys recommend me try? I was thinking I would have her try to move the ram to a different slot, remove the graphics card, or replace the power supply. I believe that the power supply would be the most likely cause for the problem. The system does have a speaker plugged in, and I know it does work because it would always endlessly buzz if I didnt have a case fan plugged into the header. It now makes no noise at all even with it removed.

I also did some research about other people's problems with this board and many people had the BIOS corrupt on them, but after a few times of the boot loop, it would pull up a screen that said the BIOS needed to be repaired and would do so. PLEASE let me know what you think my next step should be!!!!!

The power supply is a Thermaltake PurePower 600NP. The board is a Gigabyte B75M-D3H. I have not made any changes to voltages or frequencies besides for the GPU since this is a non overclocking CPU on a non overclocking board.
Last edited: Feb 13, 2016
W

When you reset the Bios did you have the power cord unplugged? Try holding the reset switch and the power switch in at the same time and boot.
OP

Yes, it was unplugged.

have her try the ram in another slot.
sounds like a motherboard, no beeps, it's not posting.........
OP

Moving the ram did nothing. You guys thinking PSU or MOBO? I dont know what the hell could be wrong with the motherboard..!
D

Certainly could be the board. Seems like if it was the PSU, you'd at least POST, or nothing would happen.

I think the bios is corrupted because of that message you get and because of the behavior you describe. Many gigabyte boards have a dual bios for insurance when this kind of thing happens. Does this board possess that feature? If so, you switch to the default bios for the time being.

Can she even get into bios to reflash it if you were to guide her through the process?
OP

I do not get that message. I am saying that other people have had this same boot loop type problem and for them that screen showed up. For me nothing shows up at all. I could tell her how to flash the bios yes, but I myself haven't even done that before. It is Dual Bios. And no, we cannot get into the bios.

What would even cause a board to randomly stop working like that?
OP

Also for the power supply I was thinking that maybe it was giving power, but was no longer able to give ENOUGH power.

same thing happened to me but it was a failed bios update
see here http://forums.tweaktown.com/gigabyte/62427-x99-ud3p-bricked-after-trying-flash-new-bios.html

since that boards lacks q-flash plus you will have to try shorting out the pins on the main bios chip (probably not something your girlfriend should do) to kick in the backup bios chip
http://forums.tweaktown.com/gigabyt...dual-bios-motherboard-if-flashing-failed.html
D

Joe88 said:
same thing happened to me but it was a failed bios update
see here http://forums.tweaktown.com/gigabyte/62427-x99-ud3p-bricked-after-trying-flash-new-bios.html

since that boards lacks q-flash plus you will have to try shorting out the pins on the main bios chip (probably not something your girlfriend should do) to kick in the backup bios chip
http://forums.tweaktown.com/gigabyt...dual-bios-motherboard-if-flashing-failed.html
Click to expand...

Your system was in a reboot loop just like this? Do you recommend that we try doing something like this?

Did i mention that this computer was working perfectly fine when I had it and worked fine for her for two days? 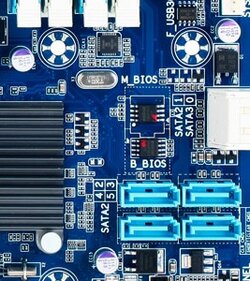 This is a picture of the bios chips. How will I know which pins to short? I believe it is the left side top two?
Last edited: Feb 13, 2016

The pins are usually near the round flat battery. The battery keeps the programmable part of the bios information from disappearing. You can also just remove the battery for 30 minutes or so.
W

BlueNostromo said:
Yes, it was unplugged.

Try holding the power reset for a minute to force the backup bios.

here is a close up if we go to page 7, when can see pin 7 is "#HOLD", and we want to short it out with pin 4 "GND"
now pin 1 is marked on the board with an arrow point with 1 next to it, also you can identify the first pin by the small dob of paint along with a small round indentation
so basically: Neither taking the battery out for a half hour or holding in the reset button did anything.

Didnt you say that we could short the #5 and #6 pins? SCLK and SI pins?

1. Short and hold pins 4+7
2. Power up the board and keep holding 4+7 shorted
3. The board will shut down, then repost (Keep holding 4+7 still)
4. On second or third reboot the board will successfully post from the backup BIOS (Once it does, remove the short)
5. Immediately hit the DEL key to Enter the BIOS as soon as you see the initial post screen.


If we were to try it with the pin #'s 5 and 6, would we use this same method? That would be much easier because we were planning on using a small paper clip top short them
Last edited: Feb 14, 2016

the SI and SCLK method isnt that reliable and could take a lot of tries to get working, it is a lot safer in the fact you can just use a screwdriver and short the pins
I had to use it simply because my bios chip lacks the HOLD feature
OP

Okay. So the method I have there is what I should do? What happens if we accidentally short out different pins? Even if we short out and destroy the main bios chip, wont it still work off the back up? I know that isn't ideal, but my question stands.

As long as you dont short anything with pin 8 (which supplies the chip with 3.3v) it should be fine
now I believe you cant actually use the b_bios as your main bios chip, in the event of a hardware failure of the m_bios, the b_bios kicks in and writes its bios data to the m_bios chip and tries to boot
I'm not to sure about it so don't hold me to that, the board lacks a switch to switch between bios chips so it always boots m_bios

Yeah, Joe88 I think you got it correct.
You must log in or register to reply here.

Monday at 7:01 AM
Overclockers.com