Hi guys and girls, this is my first post, so please forgive me if this should be posted to some more technical thread topic or if it's been answered elsewhere.

So, here's my inquiry - I have one spare fan header on my motherboard. I want to hook up my corsair H50 paired with a Kraken G12 to cool my MSI RX 570 8gb OC edition. Before all else, if this doesn't work out I will resort to a PWM hub, however I'm comfortable with electric wiring and would love to get this running before a PWM hub or adapters would arrive in the mail - I should say I'm totally into rigging this thing up with a little ingenuity. I've included pictures of my available components to help further a discussion. So, I'll ask my questions alongside photographs, here.

Can I cut the connector end of this GPU fan cable - 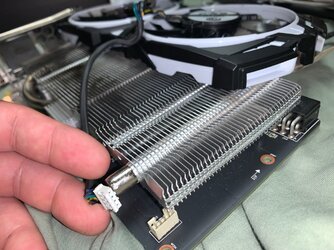 to replace this fan cable connector on this NZXT Kraken G12 (which will go directly into the graphics card's fan header in the image before) to save needing a PWM hub as NZXT instructs connecting their fan directly to the Motherboard. 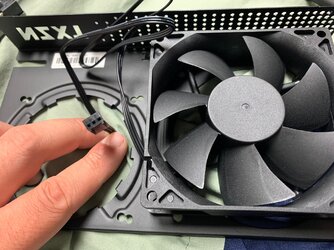 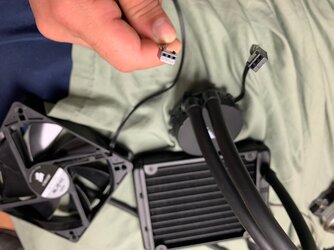 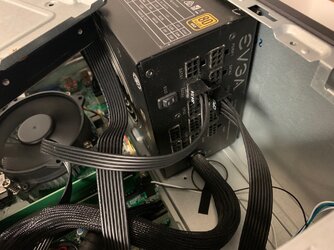 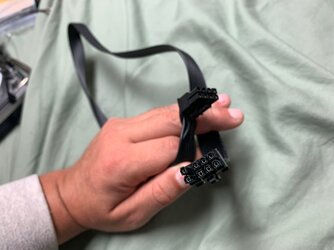 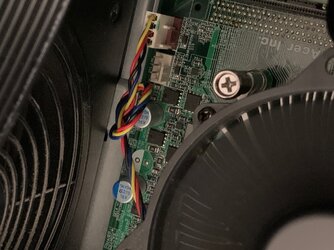 Any help would be so greatly appreciated
Thanks guys
Last edited: Oct 9, 2019
W

I would not cut wires more chance of bad connections or shorts. I would use software fan controller for the graphics card like MSI afterburner, so it will change with graphics processor temperature.

Cutting wires is fine as you know what you're doing. Solder and heatsrink etc. But it wouldn't be my first choice either.

First connecting the Kraken to the graphics card. This has been done and usually results in fan curve problems related to the way the GPU sends the PWM signal and the RPM of the stock fans. I would not recommend it. YMMV though since it's a different card, and you're welcome to try it, it's just a matter of determining which wires are 12v, ground, rpm, and pwm and matching them together. But if you try it and you don't like it, now you're stuck re-attaching the 4 pin connectors to your fans. Just think NZXT could probably easily install a GPU fan connector on the fan that comes with the Kraken, but they don't do it.

Second, powering (probably both fans, realistically) from the PSU is doable. You just need to match up the 12v and ground from the fans to the PSU cables. I'll leave it to you to determine which cables to match up, just google "pinout" for the cables you decide to use. However I would use a molex or sata power cable rather than a GPU cable for this. You mentioned the main reason is not wanting to wait for parts. I get that but maybe just let your GPU run on air until the proper parts arrive. Are you in the US? How long does it usually take for you to get parts?

I would suggest the Aquacomputer quadro (https://www.amazon.com/Aquacomputer...=2025&creative=165953&creativeASIN=B07FQH3NC6) very reasonable and provides a ton of functionality. Software is great, doesn't eat system resources. Doesn't even have to be running once you apply your curves. Or if you don't want to go that route you can easily get molex or sata to 3 pin adapters, but you lose PWM functionality.

The third option would be to use PWM spliters. This allows up to 3 fans to run off of one mobo header. This is assuming you have case fans plugged into more than one header, and a total of at least four headers on the motherboard. Then one would be for CPU, one for the pump, one for both the liquid cooler and kraken fans via a PWM splitter, and one for any case fans. You don't want to combine the fans with the pump or the GPU fans with the CPU header if you can avoid it. If you had to you could combine case and CPU fans, but it would be annoying because of how often the CPU temperature fluctuates to hear all of those fans ramp up and down. If I only had 3 headers I would actually leave the case fans running off the PSU and the others on the board with PWM (assuming your motherboard supports PWM). If you didn't want them at full blast, you could do the 7v mod with a molex connector (again some more googling, but you use the 5v as a ground and the fan only sees 7v instead of 12v. For most fans enough juice to spin but keeps the noise down. If you just try to run them on 5v they don't like to start.
OP
P


wingman99 said:
I would not cut wires more chance of bad connections or shorts. I would use software fan controller for the graphics card like MSI afterburner, so it will change with graphics processor temperature.
Click to expand...

It’s definitely iffy to cut connections
You must log in or register to reply here.