when i built this latest desktop i had 2 simple goals in mind; to have the power of an overclocked gtx 480 and the pure silence of a small laptop. i have finally achieved this goal with the new all in one maintenance-free liquid coolers for cpu and gpu. the end result is a maintenance-free rig with virtually a silent system during idle and normal tasks while the loudest component being the raid 1 hard drives when they read and write.

the reason i chose the 700D is because it has no perforated meshes and holes everywhere that allows the fan noises to escape and sucks in dust within hours. the case has a single large intake located on the bottom along with a very large air filter. i have quite a few pet birds and the pet dander from them gets sucked into any fan intake system. i have to clean the central air filter in the house constantly because of them. i wanted the case to be clean at all times with no worrying about dust and dander screwing with the overclocks.

the GTX 480 is a double-edged sword. it shoots itself in the foot because it has one major flaw with it's stock cooling system. it is not a true external exhaust, despite looking like that. it actually leaks a ton of scorching hot air from it's pertruding heat pipes. if you do not have a case with a ton of airflow and a large side fan blowing on it the gpu starts to cook itself because the fan starts to suck in it's own heat. in my example, the 700D case does not provide enough airflow to cool this card properly. this is the primary reason why this gpu is so loud and the complaints around the internet are valid. it always has to run max fan to stay alive and the noise simply approaches "retarted" levels even during a normal gaming session.

the H50 cooler uses it's stock fan in a push configuration behind the radiator. the radiator is mounted to another case fan, but i gutted this fan as it's only pupose was to act as an anchor for the setup. i did not want to go with a push / pull because that adds noise. this allows me to push air onto the radiator as it drops temps by a few celcius rather than the defaul pull configuration. all fans in the case, inlcuding the OMNI unit are stock because i found them to be quietest than aftermarket "silent" fans. they do not have the high airflow like the scythe S-flex fans i tried but silence was more important that a little more overclock. also, all the fans are regulated by the system. all case fans are set to run at 50% whenever temps reach low enough, like at idle, and ramp up to 100% when temps reach my desired mark. the 3 case fans are controlled by the motherboard's bios. the H50 uses pwm fan control via cpu fan connector. the OMNI also uses a pwm fan that is controlled by the pump with temp sensor. all fans run silent during idle and normal tasks and ramp up respectively under load. this allows me to bypass manual fan controls leaving the cooling system to be fully automated.

with the introduction of this OMNI gpu water cooler it is almost a match made in heaven for the 700D case. along with the H50 cooler on the cpu, the system is using 100% true external exhuast methods while keeping the case at a constant mid 30's even under load while filtering all the air entering. it runs silent at idle at has low noise levels under load at stock clocks with respectable noise levels with a hefty overclock as well.

- 23 minute furmark = 77c stock clocks
- 18 minute furmark = 89c OC
note; with the stock gtx 480 cooler and stock clocks, furmark would bring it up to 105c. this is when i knew i had to find something to tame this beast or it will burn down my house.
-gaming gpu temps @ stock clocks = 67c
-gaming gpu temps @ OC = 80c
-gaming gpu temps with stock fan at sock clocks = around 95c+
note; gaming tempuratures are always about 10c lower than furmark's torture test.
note; if you are playing a game that the gpu easily maxes out and spits out frames at or above your monitor's refresh rate (60 hertz, so that would 60 fps or greater, for example) you can simply enable vsync to dramatically lessen the gpu load and heat. for the heat test purposes i left vsync off.
-42c gpu idle temp with OMNI
-49c gpu idle temp with stock cooler
-46c cpu idle @ 3.84ghz
-81c cpu temps @ 3.84ghz using prime95 running for hours
-note; ambient temps in my house are always around 74c in summer and a little cooler in winter. the cpu temps is further helped by the fact that the case temps are always cool because there is no component that uses internal exhaust to spit the heat back into the system. the cpu and gpu always have cool air going through their radiator. i can go higher on the cpu overclock with the addition of the OMNI that converted the entire system to a true external exhuast platform but i have not experimented with it yet.

-my ultimate overclock stress test consists of running furmark AND prime95 at the same time for 20-30 minutes. if the system passes i consider it to be 100% stable, barring any visual artifacts. because the two radiators are next to eachother and the H50's fan is a little bit below the gpu's radiator in a push configuration, it actually helps cool the gpu better than the gpu running furmark alone as it "steals" it's heat and puts itself in the line of fire. the tradeoff is higher cpu temps because of this but the system the test as noted below. 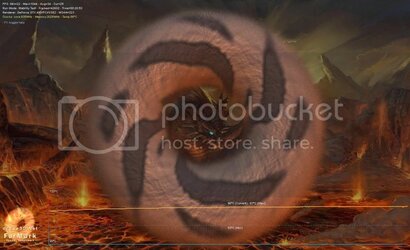 a 20 minute furmark stress test along with the prime 95 test running simultaneously actually cools the gpu below the 89c temp i experienced earlier and pegs it at 86c, and even with a higher ambient temp of 74c compared to the previous run of 73c. the cpu temps go up as the result of this and it hit 91c and the system passes the test. after about 30 minutes of shutting down furmark but continuing prime95, the cpu is back at around 81c now. 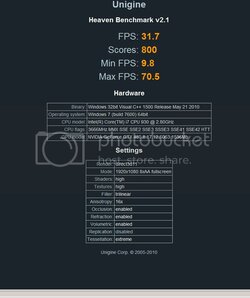 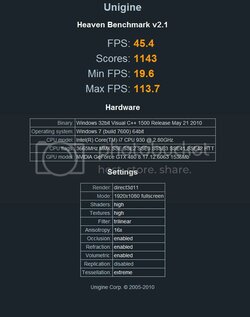 and now for some pictures; 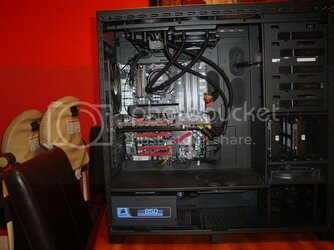 cool air only enters from below and is completely filtered. hot air exits from top rear case fan and through the 2 radiators on top. OMNI is to the left and H50 is next to it on the right. the 3rd slot is empty and can accept another OMNI if i ever go back to SLI. 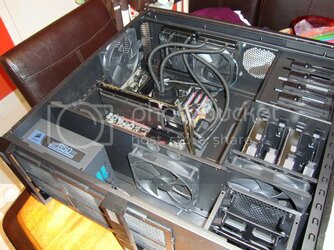 OMNI pump is attached to the radiator for hassle-free installation. unfortunately it looks like the early build units that are being made at Coolit's shop in canada do not have the nice logos on the plate and is just bare black. maybe the retail versions will have the logo, though. 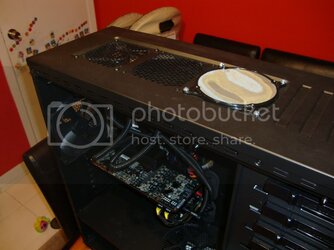 top empty fan slot has a dust filter because this slot actually acts as an intake due to the vacuum the exhaust fans create. 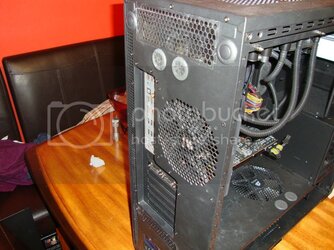 the rear mesh holes are covered with clear tape since these also act as intakes due to the vacuum of the exhaust fans. i sealed every possible spot that could act as an intake, even the bottom front removable fascia plate that allows access to the drive bays. 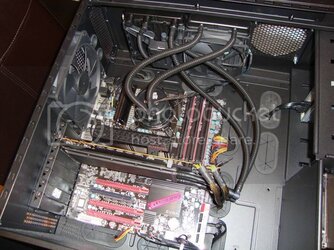 i ordered the evga single slot gpu plate to further eliminate any possible mesh holes acting as un-filtered intakes due to the vacuum. 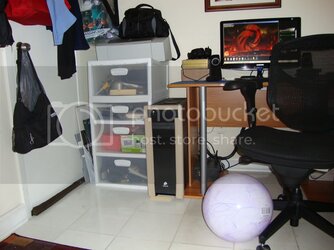 and that's where it belongs, right at that corner. i had to child proof the case with foam because it has 90 degree steel corners and would not want my kids falling and splitting their heads on it. i spent 12 hours looking for the highest possible gpu overclocks using furmark and gaming to determine visual artifacts and stability. the overclock must be 100% stable otherwise i consider it no good. an overclock that is stable in winter but not with the summer tempuratures is not consider an overclock. it must achieve factory stability under all conditions. the highest core speed i could get out of the gpu is 835 core. putting even more voltage to it passed 835 would not allow it to go any further so i am at the chip's limit.

90*C under load? Seems pretty high to me, but not bad for a sealed unit. Looks very neat with the H50 though.

Shouldn't this be under the WC forum?

I guess for the money the temps are good. At least it's quieter than it was.

High temps IMHO. But quieter.
You must log in or register to reply here.