… my new challenge is finding a Gigabyte RTX 3090 Bios for either the vision, eagle or gaming series that has a bios with resizable bar enabled and a power limit above 350W. It seems Gigabyte decided to lower the TDP after adding resizable bar for some reason.
Last edited: Apr 7, 2022

Temps are more than fine. It's just noise you're adding at this point.
OP
W

Today I moved Dominators to my small ITX box (RAM is quite tall and it barely fits) and temps in memtest are about 10C lower than on G.Skill 6400 kit. It just passed memtest @6600 1.55V and max temps were 67C. I'm checking how high I can set voltages before it starts showing errors. 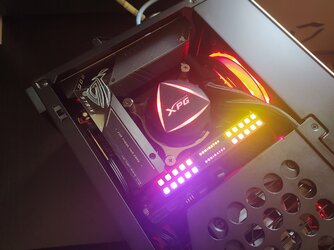 Seems like Gigabyte forgot about us... I'm considering replacing my Z690 Aorus Master but I was wondering which board would be a suitable replacement? I think I'm done with Gigabyte for the foreseeable future...

What's wrong with the Master that you're replacing it? Still can't reach the memory speeds? I see they haven't released a BIOS for it since March.

EarthDog said:
What's wrong with the Master that you're replacing it? Still can't reach the memory speeds? I see they haven't released a BIOS for it since March.

I wish it was just one thing;

1) 10GBe nic randomly disappears. Need to do a cmos clear to make it come back.
2) Some of the NVME slots don't operate at the given speed of the drive (even when following the manual guidance for selection)
3) Gigabyte support take no ownership and also removed their cross shipping options.
4) 6200 doesn't boot with 2 or 4 sticks at the speed capable
5) Some random post issues with the Corsair H170i LCD where if I turn the PC off to switch it back on I need nearly 15 attempts so it won't error the pump.

All in all I'm done with Gigabyte.

Well, maybe @Woomack can shed some light here, but I think it's going to be difficult on many boards to reach 6200 with 64GB/4 sticks. But if anyone knows which will do that, it's him.

As far as your other troubles, no clue... just sounds like bum hardware... which happens (I'm not a fan of swearing off brands for a bad apple). Get another board, RMA this one, sell the new one and move on.

As far as comparables (this is a thread about RAM, so I'll be quick...), the Hero and Strix-F are solid and should have plenty of NVMe options, so is the Taichi from ASRock, Unify board from MSI, all around that price point. If you want to grind out some details, I'll be happy to split the thread off.
OP
W

Every motherboard that I can recommend and for sure supports 6200-6800 memory kits is 2-slot. I know that almost all ASRock motherboards have problems with 6200+, most Gigabyte, and most ASUS. MSI surprisingly can't make 6800+ on their Unify-X but even cheaper motherboards run at 6400.
Gigabyte Tachyon supposed to be tested for 7000, like every motherboard is tested for 7000 before it goes to stores (not sure if it's true but I saw that info somewhere posted by someone who works with Gigabyte). My Tachyon was working at 7000 for the first week, later had problems with booting.

It's like I can recommend only "lesser evil" as every motherboard will lack the features or won't support 4 memory sticks or won't run at higher RAM clock. Gigabyte Master is one of the best equipped Z690 motherboards as there is nothing at a similar price with 10GbE LAN or 5x M.2 sockets on the PCB. I also find audio very good. It "only" has that RAM support problem.

I will only add that my Z690 Master runs in my gaming PC with the 6200 Dominator kit at 6000, just because after retraining (simply after I turn off and turn on the PC) it sometimes has stability problems. With V-Color 6200 kit was almost the same. It was working stable or couldn't boot at all.

Gigabyte didn't forget about us. The same as every single brand, they are probably working on Z790 and AM5 motherboards already. The same ASUS, MSI and others have no new BIOS releases since ~April. There are only some beta versions for OC of the "special" OC motherboards like Apex, Unify-X, Tachyon etc.

In short, I would RMA your motherboard and later sell it and replace with something else, but I would read some reviews or user comments to be sure that the features you want/need are working.
You must log in or register to reply here.