Well after tinkering around for way too long (getting the fittings right and I also had a leaky 90*) I am finally "finished" with my first watercooling build in quite some time. This is the first time I've used hardline and I initially had done everything by bending the tubing but I wasn't thrilled about how it came out. My thought is that having straight tubes gives everything a cleaner look. I ended up getting the majority of the parts for a reasonable price by trading hardware around for a couple of months as well, lol.

Over all I'm happy with the build, and for the price I paid for the Hydro X parts, I'm thrilled (I spent more on fittings). Temps are pretty good, I'm sure with better fans/blocks/rads things could be better, but I'm happy with it. This was more of a fun to do build vs anything serious so I didn't mind that the PC was down for over a month to do everything. The biggest snag I ran into was one of my 90* fittings leaked like mad and I had to have primochill replace it (great support btw). 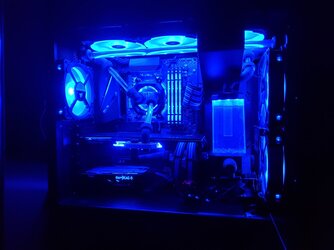 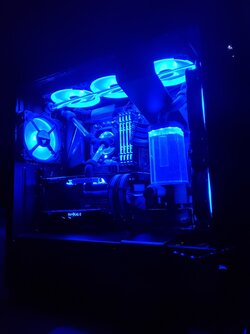 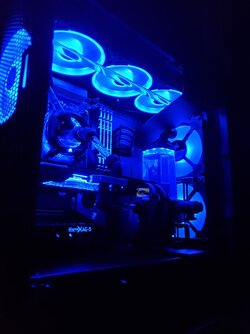 Noce job! You probably wont see any better temps tbh. Corsair has hardwarelabs build their rads for them. They are gtx and gts rebadges so top of the line. You may do better with proper rad fans but thats a big *** expense for a couple of degrees. From what ive seen corsairs blocks arent anything to scoff at either. Thats a solid loop and it looks sweet.
OP

Hah yeah it seems to be doing the job for me. I have some ML140s that I was initially running on the 280mm rad but swapping them to the LL140s didn't really change much. I actually run these fans at a low RPM most of the time and just have icue speed them up as the water warms up. Overall I'm really happy with the build.

That rear fan is bothering me
They just came out with an upgraded LL (branded QL) fan that shows rgb on the back of the fan also
https://www.corsair.com/us/en/Categ...-LED-Fans/iCUE-QL-RGB-PWM-Fan/p/CO-9050097-WW
OP

Joe88 said:
That rear fan is bothering me
They just came out with an upgraded LL (branded QL) fan that shows rgb on the back of the fan also
https://www.corsair.com/us/en/Categ...-LED-Fans/iCUE-QL-RGB-PWM-Fan/p/CO-9050097-WW
Click to expand...

Hah yeah I knew that would trigger someone. I may flip it and see how it works, not sure I want to spend $50 on a single fan when I got 4x of the 120s for $80, lol.
You must log in or register to reply here.