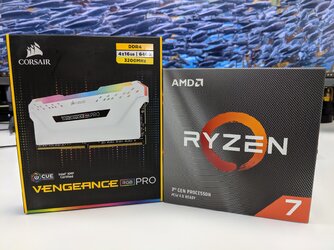 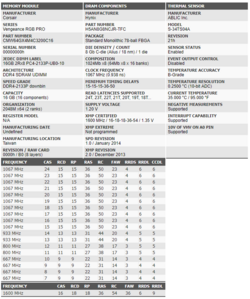 Recycling the images used before...

First system I tried it in was a Dell desktop at work. It had an i7-8700 (non-K) in it, with C246 chipset. There were no ram adjustments I could see in bios so it would only run at 2133, the highest SPD profile included. It worked ok but obviously wasn't going to show its full potential. I do wonder why don't ram manufacturers include higher SPD speeds. I don't care the timings might be JEDEC slack but at least we get the speed too.

Now at home I put it in my Ryzen 1700 + Asus X370 Prime Pro system. Remember all the ram problems we had when Ryzen originally launched? That is so far away now. I put the 4 modules in, turned on XMP, and it booted first time. These modules are dual rank, and I'm using two per channel. If there ever was a memory load, this is one.

Ok, is it stable? I haven't done in depth testing, but I gave it 6 minutes of Aida64 stress test with only ram selected, and 3 minutes of a custom Prime95 run. Not a huge amount by any means, but it should rule out any major instability.

Right now I'm trying to bench y-cruncher on it. At 3.9 GHz it gave slightly faster times for 1B than my previous run at... some slower ram speed. 10B is erroring out, but it is probably the CPU overclock as temps are rather marginal and I'm cranking up the voltage. Will probably have to drop that.
OP

Turns out it wasn't 100% stable after all. Running y-cruncher 10b kept giving errors even as I backed off the CPU overclock. The smoking gun was when I returned the CPU to stock and still errored. I backed off the ram to 3000 and re-applied the OC to 3.9, and it did a run without problem. That run took over 17 minutes, so you can't easily get away with bench stable.

CPU has now been swapped with the 3600 and the next phase of tinkering begins...
W

I will check some 16GB micron modules soon. Stuff that made 4000+ on Intel. With some luck, I will get 2x X570 mobos this week (constant delays with shipping as something supposed to arrive last week).
You must log in or register to reply here.

H
System does not POST with some memory sticks