CPU Temps, which one?

What are the correct CPU temps, RealTemp, HWInfo or HWMonitor. Which one is the most accurate? Why are they all different... 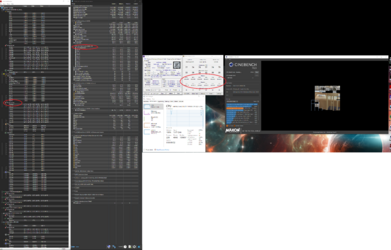 Disclaimer: I am not the most knowledgeable on the subject, but will speak of my experiences vs. your screenshot.

1) Some of the programs do not play well with one another. If, for example, you try to open EVGA's overclocking tool and CPU-Z, one of them will not open. Also, each program uses it's own proprietary information taken from the motherboard chipset and translated through its software, so it really boils down to interpretation/translation.
2) No one can say which is most "accurate". Part of the reason is because there are a lot of parameters going through this software. For example, the voltages you see in any of the software when compared with an actual multi-meter taken at the CPU may vary. If the software is calculating any of these values, there may be some variance. Combined with the fact that there are so many different CPU types both CPU brand, socket type and chipsets and years of differences between them, they vary wildly.
3) As for temperatures, these software's poll the chipset at intervals specified by the software and the user. CPU Temp, for example, can be set at 100ms poll rate meaning it could change every .1 seconds. While another might be set to read once a second or once every 10 seconds. because of this, comparing one software to another is pointless unless all things are equal (which they rarely are).
4) Information you obtain should be repeatable and relative. For example: Stick with one software, regardless of which one. Make your adjustments based off one just one of those software. Raise it up or down by 10 degrees based off the one software. If you want to verify that the software is relatively calibrated, then use a temperature probe and test it directly at the socket. This will give you a deviation from what the PC is saying vs. what you are seeing in real life.
5) Don't get hung up. If most of the software is within 10 degrees of one another, that should be enough. You can see if your throttling (exceeded tjmax) because your system will throttle and you will loose performance during tests. Don't push to the bleeding max and expect that you can get things dialed in to the nearest degree because you could have as much as 15 degrees deviation from core to core because of an uneven heatsink or CPU die which has absolutely nothing to do with the software.

I hope this helps,

FWIW, I primarly use HWinfo, because it has the most information in one place and Coretemp for a lightweight easy read on temps. 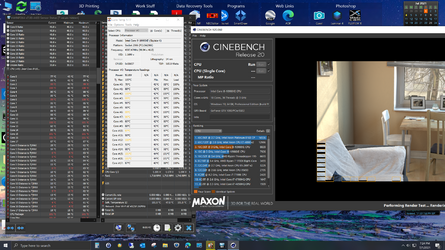 Are all the versions of the software fully updated? I would be inclined to trust the two that are most closely reporting similar temps. Full disclosure, I didn't take the time to read this, I just found it browsing some reddit pages that popped up after googling "real temp 10900k," but it might shed a little bit of light on your problem.

oops meant to include this https://www.techpowerup.com/realtemp/docs

Brutal-Force said:
If, for example, you try to open EVGA's overclocking tool and CPU-Z, one of them will not open.
Click to expand... 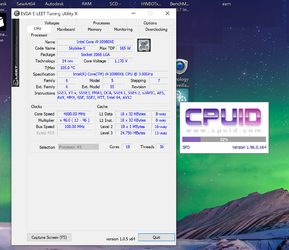 Interesting.
I'm thinking more of an OS issue. I'm on W7.
In any case, no more derail. I was just wondering is all.

Mr.Scott said:
Interesting.
I'm thinking more of an OS issue. I'm on W7.
In any case, no more derail. I was just wondering is all.
Click to expand...

For the record, Its not just CPUZ. Same problem with OCCT and with HWinfo. I am pretty sure its the EVGA utility as it is already quite buggy on the x299 platform.

Mr.Scott said:
Interesting.
I'm thinking more of an OS issue. I'm on W7.
In any case, no more derail. I was just wondering is all.
Click to expand...

No, only when I am benching for high scores. Typically my temps are between 43ish at idle and 90 under full load.

AVX offset is -2/-3 . I don't generally run my CPU much past idle unless I am doing a lot of 3D rendering with Fusion 360. During games I don't generally see past maybe 85-90 and I don't do a lot of that. My system is way overbuilt for what I actually do with it. I also don't run the AC in my house lower than 75 ambient and my current ambient room temp is 81 degrees. AVX is the devil. I wish I could just turn it off. If I trying running AVX workloads, I have to lower my overclock, or accept throttling.

Whenever I do benching I try and cool down my office so I can shave off a few degrees.

Generally I can keep my CPU temp below TjMaxx. Where I always struggle is keeping my VRM temps/power consumption under control.

I should also add, running a 4.6-4.7 is not something I would recommend that someone with a 10980xe do, if they are trying to be a) power efficient b) keep temps in wherever you run your PC, c) plan on keeping a CPU for 10 years d) run your PC at full load daily.

I don't generally run all cores at 4.6-4.7 as Cores 3, 4, 7, 8, 11 and 12, 16 and 17 run hot, while the others can generally run as much as 4.8 without breaking 100 at full load. To get my best scores, its a combination of tweaked cores ratios and voltages, almost all of them different. So if I ever say "I am running at 4.6 or 4.7" what I am really saying is what I bench at, and even then in short bursts. If I were to say what a daily overclock looks like, it would be with all cores tweaked somewhere from 4.0-4.8 with maybe an average of 4.5-4.7. AND one final note. Last month I moved into a tempered glass case and I would recommend anyone looking for a case to avoid this. I raised my base temps by roughly 6-7 degrees. Stick with mesh.

I don't want any newer overclockers to get the wrong message if they read my specs.

Want to know for sure? Figure out your CPUs throttling point and then go reach it. Whichever program reads that temp when the cpu throttles is the right one. Also, see what the mobo software monitoring says.

That said, I also use hwinfo (when I need a shed load of info) and when I simply want to see temps, Coretemp.
You must log in or register to reply here.