In Samsung's case, I'd say No because it seems they do publish their post-cache write results (see image and quote above). The other drives don't mention those, so, yes, while measurable, in the case of the other drives that don't mention it, it performs within the advertised specifications as they (unlike Samsung) don't appear to show those metrics. But again, I'm not a lawyer. I see what you're saying, but sadly, there's a lot of intentional ambiguity in marketing.

The only notification that the Samsung drives are different is the label on the drive. I don't think it's on the box. Not sure if the others even did that. Clearly, these drives don't perform (significantly) above their rated speeds. So, no, the original doesn't mean they are getting more than advertised, just that others are getting LESS with the new drive (because they actually advertised it).
W

c627627 said:
The person complaining about Crucial said "That means I generate up to 1.5TB of data to create a single episode." and talks about a significant decrease in performance. Either that's testable to be true or not...
Click to expand...

It's one person who reported a drop in performance without a comparison to the same SSD released before so it's not even a problem matching this thread. If the drive performs worse than advertised or there is any other issue, then there is something like RMA and it has nothing to do with components switch in different baches of the same product under the same PN.
As I said in the previous post, Crucial uses SATA or PCIe/QLC NAND SSD in their external/USB SSD. In the X8 there is P1 M.2 PCIe 3.0 x2 with QLC NAND which I tested in 1TB and 2TB version, and compared to the standard, retail P1 SSD. They were even using the same firmware and performed exactly the same. There could be still a faulty enclosure as there is a PCB with some components but this should be reported to Crucial support and I bet they would send a replacement within a week.
OP

I am reading what you are saying and it reads like the topic of your post is an individual drive failing to perform as expected and how Crucial would replace the individual malfunctioning drive. Whereas, the article reads:

"In the past 11 days, both Crucial and Western Digital have been caught swapping the TLC NAND... with inferior QLC NAND."

Still, the article doesn't say a word what Crucial products. There are no details or anything, they just mention the manufacturer. My last posts were about a single case of external SSD which also doesn't say what SSD.
OP

It takes one pink zebra to prove there are pink zebras in the world. Here's one P2 with illegally swapped NAND by Crucial:

"...the QLC version of the drive performs at roughly one-quarter the speed of the original when transferring files, read speeds are half as fast in real-world tests, and sustained write speeds have dropped to USB 2.0-like levels of a mere 40 MBps. That's slower than most hard drives. Unfortunately Crucial made the change without altering the product name or number or issuing an announcement." 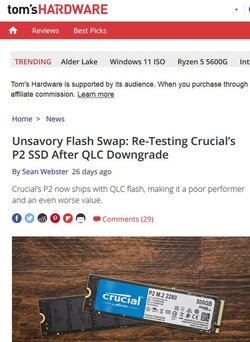 Really, couldn't you post it before when you started a thread like this? I mean, before you only linked something with Samsung SSD and no word about anything else...
Digging deeper I saw that Tom's claims lower performance but they proved it only in longer copy tests while all other tests are without a significant change. The maximum bandwidth in sequential bandwidth test in ATTO is exactly the same on old and new SSD ... so still meets the Crucial specs, regardless if anyone likes the difference in some longer copy tests or not. This is what I said before, they changed components but it still performs like in the very short specs on their website. They are not promising anything else. Don't like it then don't buy the product.

I have been the victim of "hardware changes" and mostly was not really bothered. But if I were to purchase an SSD that stated TLC nand and got QLC nand- I would not be happy or keeping said product.
W

At least in the case of Crucial P2, there was no official info about the used NAND. It was mentioned in some reviews and that's all.

Not quite as bad then. I usually try to identify what a piece actually is before I purchase. If they cant give me basic specs, then I most likely would just avoid that piece.
OP

Answering your question, I was stunned we did not have a thread on here about this already.
Usually in the past, people would be all over this linking to tests and talking about personal experiences.

There is a post on [H] forums which supports Woomack's view and provides clues as to why we haven't seen a class action suit yet:

It's bait and switch in every way except technically, unfortunately.
That's why they are pointing at the spec sheet and saying "See? We never claimed higher performance than this."

Totally sh**ty move on their part though. What's the point of using NVMe if the drives are gonna be so slow anyways?

I think the important part is for people to understand what the real world difference in performance is, and then which other drives are better, so we make an informed decision when purchasing components.

Also any reviewer who knows about this and does not EDIT the title of their review of a product which now has different components is not writing reviews for us but for companies who send them free components. So it's important to include all info in EDITED reviews and let us decide what to buy.
You must log in or register to reply here.