I have a Lenovo E585 with AMD RYZEN 5 2500U & RADEON VEGA 8, and the default dedicated VRAM is 256MB. I recorded a log of memory usage in game while lagging, and it showed that only about 5GB of RAM were being used (out of 8GB available).

I used stress-test softwares to see if that was due to the game not requiring more RAM and here is what I got : 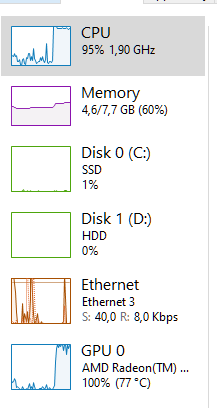 As you can see, my CPU and GPU are running at 100%, and I still have about 3GB of RAM unused. I don't know if this is normal, but it doesn't seem to me.

I wanted to increase the dedicated VRAM, but I don't have that option in the BIOS, and I don't have it either in AMD RADEON software (no 'Tuning' tab).

Can someone point me in the right direction to solve my problem ? Should I focus on dedicated VRAM ? Adding RAM (I don't think so since I already have unused RAM) ? Something else ?

First, what is the game? Second what stress software did you use for the screenshot? Maybe something like GPU-Z will give a better idea of what is going on. I believe the Vega 8 will use whatever ram it can, I don't believe it's limited to 256MB, rather that's the minimum and it can call for more from there. That said this is probably a pretty limited setup, so depending on the game there may not be much that tweaking settings can do.
OP
R

Hi, the game is Valorant, and their required specs are below what I have. I know that the Vega 8 should be using all available RAM, but as you can see, 3GB are left unused, which concerns me.

For the screenshot, I used FurMark to stress CPU and GPU at the same time. GPU-Z tells me that the GPU is using 4.5GB RAM out of 8GB. If I stress-test the CPU and GPU separately, I end up with 4.5GB RAM used each time.

FurMark doesn't necessarily simulate a game being played. It is likely that it simply doesn't use that much vram. You could try something like Unigen Heaven, or just play the game for a bit then tab out to check. I'm not sure how the iGPU in this laptop compares to the standard Vega8. For example the graphics clock for a 2500U is listed as 1100MHz while a 3200G is listed as 1250MHz. Additionally the specs for Valorant list 4GB system and 1GB VRAM, so a total of 5GB being used for that game seems appropriate.

Anyway looking at more data like GPU/CPU-z or HWINFO64 while gaming could be helpful. I still think it could be that you don't have the best experience with this APU gaming because it is a lower power part, but you could also be encountering some other limitation like a thermal issue. We'd need more data to determine. I don't think the size of the memory allocated to the iGPU is the problem though.

I was going to say... Valorant at 1080p/ultra doesn't use a ton of VRAM. If I had to guess, maybe the system is thermally throttling? Laptops tend to do that.
OP
R

Okay, I got some recordings, and it seems that temperature might be a limiting factor indeed. 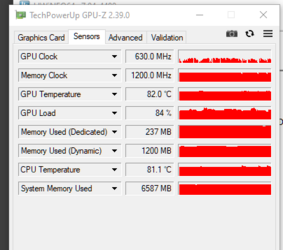 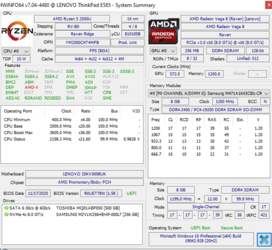 So I guess there isn't much to be done on a laptop ?

Nope, laptops, in general, are pretty limited. If the option isn't in the BIOS then you're out of luck. It does appear from GPUz that the APU is using a fair amount of the system memory.
You must log in or register to reply here.