Disk space being gobbled up

I'm not sure if this is the right section to post this question but here goes.

A customer asked me to look over their Dell laptop which is still under warranty. Has an AMD 3500U, 8gb of RAM and 128gb NVME drive, Windows 10. Her complaint was she was getting warnings, something about being short on memory.

I checked the free space on the system drive (which at only 128gb is quite small) in File Manager and quickly discovered the reason for the popup warnings. Namely, all but a very few gb of space was used. The customer told me she had already removed everything she could think of to free space: docs, pictures, unessential programs. I checked all the library folders and the Programs and Features in Control Panel and checked the recycle bin. She was right. There was hardly anything living on the computer except Windows. The Windows folder was only using about 15gb of space.

I took the unit home with me to my shop and fired it up. Now here's where it get's even more weird. There was now even less free space than there was when I checked it at the customer's house, now less than 1 gb.

I loaded he disk cleanup tool but when it checked there was virtually no space to be gained by running it, not even any left over system files to speak of.

Since the laptop was still under warranty through Costco concierge, I instructed her to work with them. I told her she really needs a larger system drive installed and that I could do that but if I opened up the laptop it would void her warranty.

What could cause that kind of space eating on the system drive? The only thing I could think of was some kind of malware. I have never seen anything like this. In retrospect, I should have switched on the ability to see hidden files and folders and looked for something that shouldn't be there. But I didn't think of it in time.

Has anyone ever experienced this phenomenon? Would this most likely be a hardware issue, a Windows issue or an infection issue?
Last edited: Dec 17, 2020

My son had some virus or other malware adding temp files to the drive constantly. I would delete them, restart and soon after it filled up again. I never figured out the specific program but a clean windows install fixed it. Sounds similar to what you saw but at least I could see these. Yours was definitely a crazy one for sure.

I remember using a small program years ago that showed disk usage by file size. I just found something similar called WinDirStat. It could help you find the offending folders or files.

I had a work computer running a Building Automation System. The BAS program had a text file that it wrote errors to. I saw that text file grow until the drive was full & deleting the one file put the HDD back to normal. 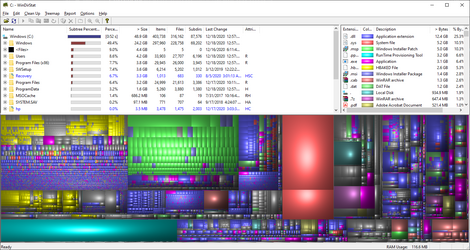 Probably pagefile.sys. Windirstat is a good suggestion. Lightweight and a small download. Alternatively you could boot a live Linux USB and us df/du (I forget which is better, both show similar information in different ways)

Yep Windirstat is excellent as is WizTree (I believe it is faster than Windirstat) to find where those pesky large files are hiding.
OP

Thanks for our responses, guys. If I run into this again I now have some tools to investigate. When I touched bases with the customer yesterday, Costco concierge was working with her on what she thought sounded like a clean install. This is what I considered doing but I think it's good for her to connect with the warranty provider in case it turns out to not fix the issue.
You must log in or register to reply here.

Is Western Digital churning out junk?