So the Vulkan patch for DOOM is out. Have any of you tried it yet? Cause I'm not really sure I'm trusting these numbers I'm seeing here. On a GeForce GTX 1080 with a +150 on core clock and a i7-5930K @ 4GHz running at Ultra setting I am doing 120 fps at 4k DSR and I'm CPU limited. Sounds kinda too good to be true.

The reddit thread on /r/gaming was showing some impressive increase to FPS. I'm looking forward to trying it out tonight. My 390 is going to really love the Vulkan API.

What did it do for you actual resolution?

ed, you think we might have something for the FP on vulkan api with different ati/nv cards on Doom? i wonder if Vulkan is going to need ati/nv driver updates as well?

SOunds like a good idea. I wonder let's see what I can throw up here quickly though in the meantime...

Ultra settings/2560x1440 was FPS as measured in FRAPS on the second level, about a two minute playthrough. Just with eyeballing the ingame (I dont recall offhand how to record these FPS and average them... too late...lol) with vulkan, it appeared to have less FPS in a couple of the same spots. Nothing remotely scientific here though.
OP

Ok, I just realized I had something called Adaptive Vsync on that was capping my framerate to 120fps. Without it the performance is better but more variable.

Playing through the first level a couple of times and eyeballing the fps numbers:

The difference for me is nowhere near that far apart... then again, I don't use DSR... but that should be working the GPU harder... something doesn't make sense there. Do you have an inordinately weak CPU and Vulkan is helping there?
OP

It is a [email protected] Should not exactly be weak sauce.

We are remarkably similar in the CPU side of things. LOL, not weak.

Something is going on... there is no way you should nearly double your performance with Vulkan... that or I am doing something wrong (did install the drivers and rebooted.. enabled Vulkan...).

are there options or something we need to do in Doom to use vulkan?

Yes. Switch it to the Vulkan API in the settings.

well looks like i need to get the new NV drivers and see how this does on a 960. i thought there was a benchmark mode for DOOM, imma check that out real quick.

*edit*
i thought there was an option to do a benchmark mode. Well that put a dampener on things but it makes me wonder, but anyway i found some vulkan tests.
http://www.gamersnexus.net/game-bench/2510-doom-vulkan-vs-opengl-benchmark-rx-480-gtx-1080
http://www.legitreviews.com/doom-gets-vulkan-implementation_183882
http://www.guru3d.com/news-story/new-patch-brings-vulkan-support-to-doom.html
Last edited: Jul 12, 2016

At 4k I see almost no change on a 980ti and Vulcan seems to be a bit uglier and pixelated, for me.

Evilsizer said:
well looks like i need to get the new NV drivers and see how this does on a 960. i thought there was a benchmark mode for DOOM, imma check that out real quick.

*edit*
i thought there was an option to do a benchmark mode. Well that put a dampener on things but it makes me wonder, but anyway i found some vulkan tests.
http://www.gamersnexus.net/game-bench/2510-doom-vulkan-vs-opengl-benchmark-rx-480-gtx-1080
http://www.legitreviews.com/doom-gets-vulkan-implementation_183882
http://www.guru3d.com/news-story/new-patch-brings-vulkan-support-to-doom.html
Click to expand...

In DOOM, there is not a benchmark mode. I just started the second mission in the campaign and played for a couple minutes.

yea i found that out, i thought at one time i had a shortcut for a benchmark mode. would be nice if the benchmarking communtiy could come up with a map or situation that would work for this. i know doom will be higher fps for a nice engine given it doesn't deal with hair like Tombraider or some other games. i need to look more into vulkan, as the doom release video or the NV 1080 video was the first time i heard about vulkan.

computerbase.de has done the most comprehensive tests I've seen so far. 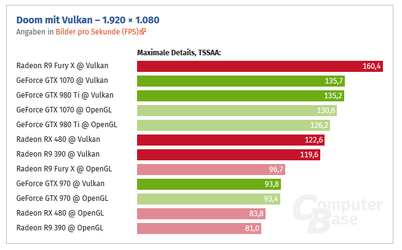 So I finally had some time to play a bit with this. Here are my first results. I wanted to try my Tahiti card first out of curiosity.

I originally started at 1080p on ultra with TSSAA(8x) and motion blur off. I'd see roughly 90-110 fps average on Vulkan and 74-90 fps average on OpenGL or just over 20% increase. I wanted to see if I put a bigger gpu load if I could get the gap to close like we saw with earlier mantle games. So I upped the res to 1440p (VSR) and put the AA setting to SMA (so no Asynch compute).

I was pretty surprised at the result. In lighter load areas I was still seeing about 20-25% uplift, but under heavy load when the OpenGL version would drop down to almost 30 fps, the Vulkan version stayed at the upper 40s. It was an almost 50% improvement. I noticed it especially when going through a hallway with a lot of steam, the OpenGL path would chug hard and get uncomfortable to play whereas the Vulkan path still felt very smooth. Obviously not as good as at 1080p but still very playable and smooth. Game looked great and felt great to play. Very impressive, very cool to experience. Very well done. I grabbed a screenshot comparison below. I used a camera for the Vulkan shot before I realized there's a camera mode or whatever in Doom now so I'll use that in the future. I have another machine and other cards to test with but it will be as time allows. 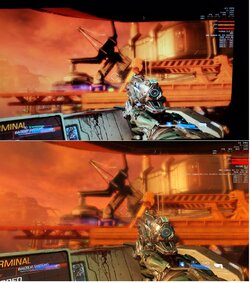 That specific area drops FPS hard, must be a glitch because in all the other panoramic outdoor mine stayed roughly the same ?

Can't wait to try this when I get home!

Btw to the op. are you 100% sure DSR is working with vulkan?

hmm that is a difference but am i the only one seeing Ogl looking better IQ wise vs vulkan.
You must log in or register to reply here.