DP to DVI-D via adapter does not work for second monitor (2080 Ti).

I have two monitors, an Acer Predator (2560x1440) and a knock off Catleap Q270 (2560x1440). Prior to using this new GPU (2080 Ti), I ran DP to the Predator and DVI-D to DVI-D on the Catleap without issue both running 2560x1440 (Predator is at 144 Hz). I put the new GPU in, hooked up DP to DP for the Predator and ran a DP to DVI-D (via adapter included with the card...even tried a second one) to the Catleap. The Catleap shows it has a signal, but it is a black screen. It shows as a display in the the NV CPanel, however I am unable to check off the checkbox and add it to extend the display/desktop so I can use dual monitors. If I unplug the monitor I hear the noise acknowleding a device was removed. When I plug it back in, I hear the device connected sound so the cable and adapter are 'good' AFAIK. Windows Display "Didn't detect another display". 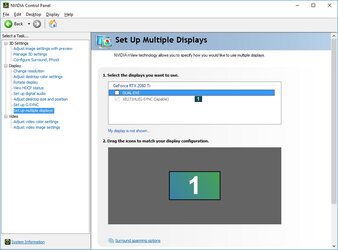 The GPU only has 3x DP and 1x HDMI. The monitor in question is DVI-D only.

What am I missing here? Why was DVI-D to DVI-D ok, but DP (from the card) to a DP to DVI-D adapter doesn't? Will an HDMI to DVI-D work?

Does it show up in device manager? A plc adapter of mine needed a driver for it to work. Not sure if the dp-dvi does.

Might be a defective gpu you can send it to me

I show two Generic PnP monitors in the device manager. I don't imagine needed a driver for this, but, I've heard of stranger things.

EDIt: Even as the only monitor, it never displays a picture (but has a signal - black screen).
Last edited: Sep 17, 2018

Same thing on two of the new cards.

I will gladly take the cards. No need to rma. Lol

What kind of cable do you have DVI-D dual/single? You might not be getting "enough" signal
OP

DVI-D. The adapter is DP to DVI-D as well.

The only thing new in the loop is the card, the output source (was Dvi-d, now DP) and the adapter. The monitor behaves the same with a mDP to DP to dvi-d so it's not the adapter.

But DP to DVI-D may need a dual cable for the added data, I don't know for sure just thowing things to see what sticks.

Sorry I was not clear... It is a DVI-D Dual Link all around.

I will confirm the adapter is a DVI-D (DL), but it has the holes for it exactly. EDIt: It is wired as Dual DVI-D...

That said, it did not work using another cable DVI-D DL to mDP cable with a mDP to DP adapter either.
Last edited: Sep 18, 2018

Ok try this, you know the Acer Predator works when pluged in a DP port, so try the Acer Predator in each DP port on each of the new cards to see if they work. Also check the DP to DVI adapter on a 1080 card just to rule it out. (I know you checked it but do it again)
OP

Swapped GPUs back to the 1080 and with the DVI DL (DL) adapter in the loop, it does the same thing (no picture but signal). I go straight DVI and I am able to select it in the NV CP without issue. With the adapter, I cannot check it off.

Swapped GPUs back to the 1080 and with the DVI DL (DL) adapter in the loop, it does the same thing (no picture but signal). I go straight DVI and I am able to select it in the NV CP without issue. With the adapter, I cannot check it off.

Why? Makes no sense to me...Is it something in the monitor perhaps?? I don't have another monitor that has DVI to test......
Click to expand...

I have 1 more thing for you to try, turn off all power (unplug cords) then hook up all cables and adapter then plug the power cord back in and power up. I'm thinking the adapter does not like being plugged in with power on. I have a DP to VGA adapter and it would not work if I plugged it in with power on.
OP

I'll give it a whirl in a bit and report back (though I may have done that??? not sure, LOL)... many thanks for the ideas!

Maybe. I'm also going to try HDMI to DVI-D DL adapter and see if that works.

Though when reading, it seems like even the active adapters SAY the limit is 1920x1200 or something. I know DVI-D DL can go over that so salt block for deer there.

let me know if what you do works, when i get my card in a few days (hopefully) i will start taking shots at it, i have the same catleap monitor and a 2080ti in the mail. so we are in the same boat!
OP

Its the same issue...recognizes it, but will not let me select it.

I'm guessing at this point its the monitor.

Its the same issue...recognizes it, but will not let me select it.

I'm guessing at this point its the monitor.
Click to expand...

I have adapters that support a higher res. Its dvid dl to mdp, then mdp to DP.

3 different adapter types. 1 of which I absolutely know worked before on that monitor with a different card.
You must log in or register to reply here.

2nd monitor not appearing through DVI